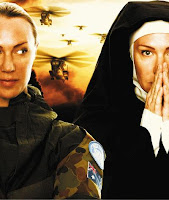 GRIFFIN THEATRE COMPANY and RIVERSIDE PRODUCTIONS present the WORLD PREMIERE of THE MODERN INTERNATIONAL DEAD by Damien Millar. At the SBW Stables Theatre, Sydney.
We have three Australians, one with a spiritual vocation, one with a scientific vocation and one a bewildered young man who likes adventures and joins the army. Each of them follow their instincts, and their fates unravel. Each are placed in a crucible with the intense “bunsen burner of life under them”, and each are melted down to their core. Each in their ravelling life thread are taken to places that stretch them into enduring feats that only the pure core of humanity can confront and survive. These ordinary people become true heroes of the modern international world. “This is witness theatre at its most compelling.”

“Witness Theatre” is the equivalent to another name for what some of us have come to shudder at: Verbatim theatre. But I promise you, that what the writer Damien Millar has hewn and sculpted from a huge research preparation of interviews (and some reading) is not mundane or tedious or a cause for any need to shudder. As Mr Millar states in his introduction to the text “It is a play, and should not be mistaken for a work of history or objective journalism.” It is first and foremost a PLAY. My experience of this piece, from the first entrance of Colin Moody, was one of subjective surrender and I was gripped and moved throughout. The disconnected objectivism of say, most of STUFF HAPPENS by David Hare, does not penetrate or dominate what this creative company have put together for you.

To quote from the script introduction: “Against a backdrop of miraculous visions and terrible repercussions in Rwanda, secret facilities in Iraq, landmines in Cambodia and political cleansing in East Timor comes these extraordinary stories of the incredible Australians who set out to bring relief and assistance to a troubled world. But when politics impedes progress and reality shatters aspiration, the only consistency is compromise… So what motivates these individuals to risk their lives and go back time and time again?...” This is what this play explores and delivers with life enhancing clarity.

This script is bursting with the adroit perception, intelligence and theatrical wit and skill of the writer. Obviously this writer is in touch with the real world and has a sanguine view of it despite the contentious difficulties of living through it and this is married to a wonderfully digested knowledge of how theatre works. His knowledge of theatre forms is resonant throughout his writing choices. Expositional information, intellectual debate, iconic humour, drama, melodrama, comedy, vaudeville, character development and revelation. etc. No form or technique is unturned to deliver this story. This was written with intellectual passion and compassion and is a gift to his fellow artists and just as importantly, his audience.

Chris Mead, the Director, has done great service to the play. Genevieve Blanchett (Set and Costume Design ) has stripped the upstairs theatre and stage back to a old government coloured two green with a waist high thin band about the wall of a third green; the floor uneven - one area the original floor boards the other a painted chip board the fittings stripped back and lit by flurescents so that it has a gruesome corroded worn look and feel. The atmosphere is primitively a poverty clinical. Stark, bare uncomfortable. The props are minimal, a tattered tin trunk, a set of shelves of worn second hand folders and scratched used tools. It is wholly atmospheric, general and at the same time, specific. The three actors play three principal characters as well as many others; (Maybe up to 40 other impersonations) Their costume changes are swift, clever and indicative - a great success of clear story telling expediency. The lighting by Bernie Tan is amazing in its sensitive accuracy and ability to create focus and impact. The Composer/Sound Design by Nick Wishart is also a wonderful collaboration with the director and actors.

From the first moment that Colin Moody appears, all muffled up in head to toe protective masking and gear to the last line of the play as Rod Barton, the gardener, rather than the scientist, and his fledgling plant, there is an unremitting and sensitive diversity and sensitivity to every task he is asked to share with us. This includes several nuns and the apparition of Mary of Kibeho, Mother of the Word!!! This hugely passionate and intelligent actor has met and married material that sets him alight so that all that he does is white hot with clarity and political passion and naked humanity. In the character Rod’s retelling of the Iraq Weapons of Mass Destruction investigation with Hans Blix the consequent lies, betrayals and deaths is stunning in Mr Moody’s laser like focus of passion.
Belinda McClory, mostly concerned with the novitiate nun/counsellor (Bridgette) is able to bring her alive with swiftly communicated stillness or silences as well as vocal ownerships; add to this, this skilful actor’s ability to shift shape and demeanour with economic ease and accuracy for her other incarnations. Ms McCory is amazing. (Why don’t we see this chameleon more often on Sydney Stages?) Bridgete’s debate over troubled faith with the apparition of Mary is exhilarating and lacerating for those of us who once had faith and still mourn its loss.
Ian Meadows slips in and out of many characters but principally carries the story of Luke the laconic, iconic and ironic lost boy to soldier so clearly that his ultimate exasperated rejection of ANZAC DAY and what it celebrates rings with the cauterising truth of faith lost in the harsh brutality of political hypocrisies in the midst of a truly heartless human tragedy which he found himself part of: the massacre by the Rwandan Patriotic Army (RPA) at the displaced persons camp at Kibeho. Mr Meadows has the youthful Australian presence that we as a culture identify with as part of our national heritage and we grieve with his loss of the optimism of that Australian iconic identity as this engaged actor travels through the play.

This is ensemble acting of a very high order, conjured by these three remarkable actors under the close direction of Chris Mead inspired by the writing of Damien Millar that should be seen and celebrated.

At a time when we have just celebrated the feats of Olympic athletes at both the Main Games and the Paralympics for their greater than the norm achievements this play reveals and admires the Super Human feats of others in foreign fields of endeavour who do it out of a positive commitment to the value of just the right to an ordinary LIFE for all peoples. Ordinary people who find themselves in extraordinary circumstances and elect to do something that is hard but important. Sometimes over and over again, even at their own risk of body and, regrettably, soul. This play honours them. Mr Millar should be congratulated for exercising his expertise in areas of Australian’s lives that are mostly foreign to us.

THE SERPENT’S TEETH earlier this year presented the Sydney audience with a world view of some substance but it was in my view let down with less secure direction and some sentimental acting than this production. At Belvoir Street Theatre we recently were given a wonderful text and production of a Canadian writer’s urgent "world" storytelling in SCORCHED (despite in my experience of a performance some sentimentality in some of the acting that was not necessary). Then, this year the Stables Theatre stage has presented STONING MARY (another scorching showing of disasters in the world; (if you read my review I felt it was only half a play and tender THE MODERN INTERNATIONAL DEAD as an example of what I think is the whole play in this genre of concern): and then two significant pieces of Australian writing: COLDER by Lachlan Philpott; DON’T SAY THE WORDS by Tom Holloway and now THE MODERN INTERNATIONAL DEAD by Damien Millar.

It is a good year on the Stables stage both the main company Griffin Theatre Company and the Griffin Stablemates season combining to give highly credible and satisfying work. I hope you are challenged by this production. I need to add that there are, in my view, still some difficulties with the through structure of the first act of the play. It is too jagged, it never seems to let the audience own or identify securely and so there was for me a disorientation and a consequent loss of impetus to my concentration. However don’t give up at the interval (as a few of my audience did), do go back in you will be rewarded for your persistence. I was.
Playing now until 11 October. Book online or call 1300 306 776.
Posted by Pearly Productions at 3:07 PM