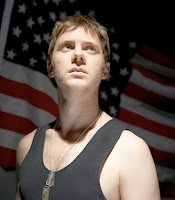 RADIO, by Al Smith presented by THE GEMEINSCHAFT DOGS at The Old Fitzroy. (Tamarama Rock Surfers)

If you want a conventional and old fashioned narrative monologue reasonably well acted (Andrew Bibby) and guided (Travis Green) and only about an hour long then this might be a way to spend your time and cash.

This is a work from the Edinburgh Fringe Festival, 2006. It is written by an Englishman (Al Smith) about a young American youth living in the "centre" of the United States through the Space Race and the Kennedy Assassination to Vietnam performed by an Australian actor in 2008. It is a conventional (banal) straight forward writing technique that tells a story in a long flashback in chronological order that has no real resonance for me or I suspect a contemporary Australian audience. We have been here many times before.

I cannot really fathom why it is being staged except that maybe the writer and director are filling an unexpected gap in their season???!!!!!! It seems to me a waste of the time and space at the Old Fitzroy.

Posted by Pearly Productions at 10:01 AM

text of this play is like one of those hamburgers you get in a bag from 7 eleven when u r drunk and hungry. its soggy and bland and after eating it u regret you didn't just chew your own tongue.
the direction and the acting are great but why do we need to see this? when other theatre companies are happily filleting aussie content in favour of anything else as long as its not from here i hope we count on the old fitz not to follow suite and not to let us down like this again.