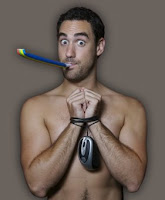 BLOWING WHISTLES is an English play by Matthew Todd skilfully adapted to the local Sydney scene by Alice Livingstone and Pete Nettell. This is a revival of a production of this play after a successful season at the B Sharp venue at Belvoir during the 2008 Mardi Gras festivities last February. The post card blurb suggests that “straight and gay audiences alike will relate to this comedy”. Certainly the gay audience will embrace it. They did last night.

The play’s main story deals with two men, Nigel (Lindsay Moss) and Jamie ( Neil Phipps) on the night of their 10th Anniversary, which in this version of the play happens to co-incide with the Mardi Gras Parade and Party, as a couple coming to terms with the generational growing pains of a relationship as it moves into a necessarily more mature understanding. Moving from the hedonistic life style of relative youth to the facing up to the passing of time and a feeling of a need for a new value system to rest their life choices on. One of them is 37, the other 32. One of them is growing up the other is not. It leads to a fairly melodramatic but realistic duel of wills and expressions of angst.

The other part of the play is the catalyst for this confrontation. It concerns a young, 17 year old gay/"bi-curious" man, Mark (Lachlan Mantell) who is trying to find out what it is to be gay and how to behave or navigate oneself into this marginalised world. He is of the generation that uses the internet to find his education and sex. He has, of course, no educational mentors or instruction and no history to support him in his forays and they result in the usual experiences of the ignorant beginner, fraught with wrong and dangerous moves. (See Alan Ball’s TOWELHEAD at the movies, to see a heterosexual version of this dilemma). This for me was the most interesting stream in the play. Covering an area of experience of the younger generation and the difficulties they face in a world where material values are prevalently paramount to their self esteem and the internet as an easier relationship than that of a human face to face contact. The confusion between love and sex is the same dilemma for all three men, but for the young man it is also connected to the appearances of money: an apartment, an “audi” etc as also valuable goals. He pleads for love but he craves security of another kind as well. His confusion is truly pathetic in its proper meaning (arousing pity through sadness). Neither of these older men really know how to help, their own emotional immaturity still a barrier to looking outside themselves. The proper assistance to this young boy (surrogate son) may have been a way to grow but they are not able to deal with that as yet. This stream of the text could bear more examination. (note I feel Tommy Murphy’s play, STRANGERS IN BETWEEN, from a few years back at The Griffin/Stables dealt with this world fairly well and could be looked at again profitably.)

The writing in this play is mostly a mix between the broad camp comedy quips of say THE GOLDEN GIRLS and the soap opera sentimentality of, say, DYNASTY (both 80’s Television). However, if you enjoyed QUEER AS FOLK you will love this as well. This is very M.O.R. (MIDDLE OF THE ROAD).

The acting is generally competent and certainly sincere, especially Mr Phipps, and it is ultimately absorbingly believable. (The work of Mr Mantell is curiously disturbing in its naturalism and I would need to see him in other work before I could recognise his "acting" talent. It should be taken as a compliment that I found it very real and in no way theatrical.) The Direction is straight forward and serves the text (Pete Nettell and Alice Livingstone.) The Set (from Ikea) and graphic designs (Wayne Harris) are serviceable. Straight forwardly pragmatic.

This is Community Art at its most necessary. For any marginalised section of a community it is essential that these stories are told and that are told in a public space with a lot of people. The cathartic therapy that one feels as a result of this hugely shared experience is a necessity for a healthy community. One could feel the recognition and confrontation, comedy and relief palpably in the theatre throughout the performance. Last year, for the gay community, it was Tommy Murphy’s HOLDING THE MAN. It seemed to run forever all over the country. There is an appetite and need for this kind of play as the Belvoir seems to have found with its telling of the Indigenous story for a section of the Sydney community. In San Francisco there is a small community theatre called THE NEW CONSERVATORY, on the corner of Van Ness and Market Street, which programs, year round, only gay plays and/or material. In fact this is where HOLDING THE MAN had its American debut last year. I am not suggesting the need for a similar year-round company but just touting the value of such available experiences. The bigger community had/has David Williamson and cathartically used to get “its rocks off” with him. The gay community have Tommy Murphy, although there may be a shift in his direction if SATURN’S RETURN is a guide, targeting of the metrosexual generation “Y”.

I would prefer if the Focus Theatre continue this gay market target to see Christopher Shinn and/or more Mark Ravenhill. Both of these writers have a bigger world view within their gay lens that would be/could be highly appreciated by this area of the community and the larger homogenous one. They have a more astringent theatrical vocabulary than Mr Todd and certainly less sentimental. In both of these writers cases, very modern and real reflections of the society we live in. Pleased though I am to have seen this, this time round.

Good luck with the season. I agree with the above post card blurb: the gay audience will love this, but just ensure your straight friends are ready. There is in the foyer a warning to language, nudity and sex scenes. (I wonder whether the nudity and sex in this production borders on sexploitation.) As one of the characters in the play suggests these warnings may ensure a full house.

Posted by Pearly Productions at 11:09 AM

I saw this play opening night. Sitting through the second half was painful! It was indulgent and clichéd. Over-all, I would have been quite satisfied if the play had finished after the first half. Then perhaps I wouldn't view it as such a waste of my time.