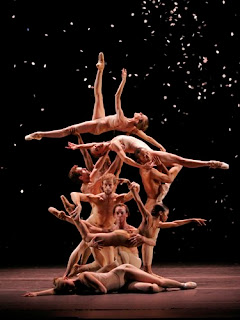 THE WHEELDON COMPANY and the SYDNEY FESTIVAL present MORPHOSES at the Theatre Royal.

“Morphoses / The Wheeldon Company is a new, dynamic ballet company founded in 2007 by Christopher Wheeldon and Lourdes Lopez. The Company, is based in New York and London, has as its mission to broaden the scope of classical ballet by emphasising innovation and fostering creativity through collaboration……. In calling the company Morphoses, Wheeldon underlined his emphasis on versatility and the ability to change shape, implying the magical power of transformation……. All Wheeldon wanted to do was create works for a loose group of some of the world’s best dancers, hired season by season from New York City Ballet, the Royal Ballet and other companies.”…. (so that) constant mobility and cultural hybridity are facts of life.”

For The Sydney season the dancers are drawn from a wide source of talent. There are 5 dancers from The Australian Ballet as well as companies such as The Washington Ballet, The Royal Danish Ballet, San Francisco Ballet and others. There is also a live orchestra.

The first work of the program was COMMEDIA, choreography by Christopher Wheeldon. Music by Igor Stravinsky. Costumes by Isabel Toledo. Set Design by Ruben Toledo. This piece was commissioned by New York City Centre and Sadler’s Wells Theatre, London, 2008. It was created with an eye to this years’ celebration of the Ballet Russes. The score was originally created for PULCINELLA for Ballet Russes. Mr Wheeldon in his little introduction before the performance told us that this work is in homage to that company and that “by looking back, they could look forward.” The relative look of the set (until the framing Commedia images were flown out, much too late for my taste) was more a look back then much look forward. The work made up of many duets and other configurations of the company of eight dancers, showed only the promise of the work’s possibilities. I read the dancers performances as relatively hesitant and cautious. It seemed to lack the panache and security that the details of the choreography required. Caution and care were the hallmarks of the execution. It lacked confidence and ease. It revealed the dancers at work and lacked the spontaneity of unequivocal surety. We were always in the “present” of the created step instead of the forward action of evolution into the next moment, future. It was earth bound. The problem seemed to me a lack of real knowledge of the ensemble “parts”. After the bench mark of PARIS OPERA BALLET COMPANY from two years ago, the brilliance of a true company ensemble finish certainly is one of the measurements that I carry with me when I attend the dance. This was not evident in this dance at my performance and so diminished the impact of the possibility of Mr Wheeldon’s choreography.

The duet by choreographer William Forsythe, SLINGERLAND PAS DEUX, danced by Celine Cassone and Edward Liang was similarly disappointing. The experience I have of Mr Forsythe’s work, with other companies has always had the hallmark of FLIGHT. I nearly always equate his work with requiring the dexterity of a Humming Bird in flight. This felt to me as if two dancers were still learning about each other and the work lacked adroitness and finesse. (Maybe it is the orchestra, that lacked brio. It made up of a “pick up” core. (Music by Gavin Bryars.) Conducted by Paul Kildea.

After the interval another duet. DISTANT VOICES choreographed by Edward Liang. Music by Tomaso Albinoni. Costumes by Marc Zappone. Danced by Robert Curran and Sija Schandorff. This work had much more surety about its partnership interactions and was a relative pleasure to witness.

The last work FOOL’S PARADISE by Christopher Wheeldon. Music by Joby Talbot. Costumes by Narciso Rodriguez. Lighting by Penny Jacobus. This was, for me, the most confidently danced. The combinations of the nine dancers, the variation of shapes and figures of the organised geometrical shapes, enhanced by extended arm and leg stretches were nearly mesmeric in their execution. In this performance there was a truer exhibition of the talent of the choreographer and the dancers.

It is a big risk to have a “pick up” of dancers. A company style and the revelation of a choreographer’s style is built on confident knowledge of your co-creators and a familiarity of trust. This performance lacked that sense. I have seen several examples of Mr Wheeldon’s work at the San Francisco Ballet, the New York City Ballet and The Australian Ballet over the years and am an enthusiastic fan of his output. I encouraged several friends to attend this program and have had some need to justify my enthusiasm based on this showing. Disappointing. Terribly disappointing as this was the major dance offer in the Festival. Even more so after the thrill of the Opening Night exhibition of dance in Martin Place.

Ah, well, that is what Festivals are about. The opportunity to take risk.

Posted by Pearly Productions at 7:01 PM