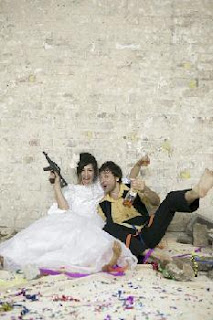 BAGHDAD WEDING is Hassan Abdulrazzak’s first play and it was first performed at Soho Theatre, London, in June 2007. Mr Abdulrazzak holds a PhD in Molecular Biology and works as a postdoctoral researcher at Imperial College. He has, since this play, also worked for the Royal Court in translation of an Israeli play (603 by Imad Farajin) and is on attachment with the Royal Academy of Dramatic Art (RADA). I mention Mr Abdulrazzak’s background because part of the fascination of this text and production, for me, is the biographical authenticities that are reflected in the characters he has written and the casual but insightful cultural details and insights that are anthropologically intriguing for someone fairly ignorant of the country in which the play is set. (For example the ablution ritual around the reading of the Qur’an, in the latter half of the play.) Apparently the writer has been present at the rehearsals, and there has also been a Cultural Consultant, Layla Naji. All these details are apparent in the niceties of the direction.

In the writer’s notes in the program, Mr Abdulrazzak talks of the genealogical maps he has made of his own family and, sadly, despite the fact that most of his relatives were born in Baghdad none of them (over 1,000) live there now. A diaspora of Iraqis refugees or immigrants all over the world. He goes on to lament that most of the West only know the Iraqi people from the nightly news “that hardly paints a flattering picture: looters, suicide bombers, religious fundamentalists and angry victims.... (and) yet there is much (else) to celebrate in Iraqi culture. Iraq has produced some wonderful scientists, doctors, academics, architects, poets, painters, sculptors, musicians and writers.... In BAGHDAD WEDDING, they get centre stage.”

As in the ONE THOUSAND AND ONE NIGHTS, we have a Narrator, Marwan (Yalin Ozucelik), who tells us the story of himself and contemporary friends and of events that swing between London in 1998 and Baghdad in 2004. As in the stories of Scherazade, stories open into stories, time and locations shift along a fascinating spine of, in this instance, the journey of Salim, a medical student and novelist, and his adventures between weddings in Baghdad.

It is the world and the life styles of these, admittedly privileged Iraqis, that surprised and normalised the world for me. Normal in that I recognised the human aspirations and ambitions of the individuals we meet, they are much like my own and just as sophisticated, bourgeois and humanly complicated in the soap opera of real emotional needs, and yet contextualised in an extraordinary world for me, a war zone, a country occupied by a foreign power and at the mercy of internecine warring parties. In a world of dangerous circumstances where the ordinary biological urges, sanctified by the traditions of cultural rituals, still persistently go on: A wedding. (Just as it does in Sydney: a safe zone. "How much more privilege do I experience? What luck to be born here", I breathe as I watch the world of the play.) Like the recent film from Iran, PERSEPOLIS, it takes me to a place where I can partly identify and yet have a great learning curve of understanding of daily life in this far away country, that the nightly news does not give me. It gives it all a human face, not just the political arguments and results. It does hit home.

The play for all of its serious intent is also amusing and wryly beguiling in its hold on you. It is not just dramatic hard realities telling us of desperate experiences, for at the centre of this story are characters that have a broader and full sense of irony and there is a constant mordant humour that keeps a perspective on the human dilemmas and tragedies that unfurl - a triumph of the indomitable human spirit. “In Iraq, a wedding is not a wedding unless shots get fired. It’s like in England where a wedding is not a wedding unless someone pukes or tries to fuck one of the bridesmaids. That’s just the way it goes.”

The play is directed by a very promising younger artist, Geordie Brookman. I was eager to see this work as a result of the very exacting and rewarding production of TENDER at the Stables Theatre last year. Working with the Set Designer (Robert Kemp) we see a desert floor and a high wall of concrete, of what look like, barriers. (This confused me as the visual reference reminded me of the Israeli/Palestinian separation wall rather than any visual memory of my encounters to bombed out Baghdad.) An upholstered chair and later a carpet, reminded me of the looting of the museums and buildings of the city. Milk crates serve as furniture for most of the locations. The aesthetic problem for me with this design, besides the wall connotations, is that, unfortunately, it drew for me, many references to the Company B production of SCORCHED in the same space. It is unfortunate because it alerted me to the differences to the skills of the two productions. SCORCHED was directed by the esteemed veteran of this space, Neil Armfield. Mr Brookman examples very promising tastes into the work but reveals in contrast the anticipatory excesses of the younger artist. For instance the Lighting Design (Niklas Pajanti) while often beautiful, was seemingly over fussy and often erred on creating startling images and atmospherics but failed to literally illuminate the action. ( Sometimes it was very difficult to see the faces of the actors to read their offers. Without clear sight of the face it also reduces the ability for us to always hear what is been said, as we also unconsciously read the lips of the actors to discern the text.) The Sound Design (Jeremy Silver) is also overused and although it is generally accurate in underlining the narrative and creating the right atmosphere it was too much like a film score and too present to just support the activity on the stage. These are quibbles but the remembered contrasts to the judgements in the production of SCORCHED, prompted by the echo of the Set Designs were interesting to compare.

Certainly the Costume Design (Pip Runciman) was detailed and not distracting (NB the length of the trousers for the character of Yasser - wonderfully illustrative of character.). The choice of using an accented dialect for the world of the play also gave an entrance for real believability in the world we were watching and yet provided the right distancing affect to absorb the social and political parallels of the play.

There are three outstanding performances in this production. Yalin Ozucelik as Marwan is marvellous in both his tasks as a “brechtian” narrator to the whole of the story and as a moving key participant in the action. His last speech is indicative of his fine judgement: “A country found, and lost again. / When I remember it, my mind is sent reeling, / Falling through space like a stone /And my heart aches / My heart catches.” Truly my heart caught in the emotionalism of that speech. It highlighted the delicacy of the tracing of a set of choices made by this actor in the creation of a consummate story teller and character.

Ben Winspear as Salim, the protagonist is wonderfully louche and yet keenly alert as a novelist / sensationalist caught in the two worlds of the West and The East, wallowing in both their possibilities and treading in both, and suffering, therefore, the consequences of a life that is alive and combative rather than submissive to the systems. The casual dandy of London to the captured and wounded aesthete in the Iraqi war field and the American interrogation prison is beautifully delineated and experienced.

Arky Michael as Kathum, the wily and clever survivor in war torn Baghdad is amusing and detailed in the plots he is forced to negotiate. The actor’s intelligence expressed through a restless energy in the vocal and physical choices are indeed rewarding for us as an audience.

Unfortunately the key role of Luma (Melanie Vallejo), the only major female character in the play, does not have an equal impact. Ms Vallejo, while looking right and having a capacity "to walk and talk" the role convincingly, lacks the ability to give us depth or sophisticated insights into Luma’s predicament. Luma is a powerfully integral part of the cultural and human dilemmas of the world of the play. When reading the play her shadow hangs over the life choices of the two principal men. It is especially obvious as the above three actors are often directly engaged with her and the contrasts of observation and skill are too clear. This is, relatively, an essential weakness in the production. The other actors are engaged in playing multiple roles and generally succeed. Sometimes the relative failure for me to believe in them is gauged by the accuracy or not of the dialect work. When I don’t notice it I’m with them, when I do, I’m not. I’m brought back to the reality of the theatre space. (It is merely a skill task: mechanistic to solve. Time consuming but essential and part of the tool kit of the actor’s craft, surely?) My suspension of belief is breached. I especially was arrested by Robert Mammone in his doubling.

This is a very good beginning to the Company B year. Geordie Brookman registers his wonderful potential as a director. The play is an interesting insight into the world of some Iraqis and of the war and its after affects on a nation. The re-enforcement of the importance of the instinctual needs of being at Home and in Country are part of the lasting insights for me.

(It was also wonderful to see Australian actors on the Upstairs stage after a three month absence(!) except Sean Taylor as commentator in THE PIANIST.)

I would like to add a correction about the play 603 which is not at all an israeli play but a palestinian one from the autor Imad Farajin.