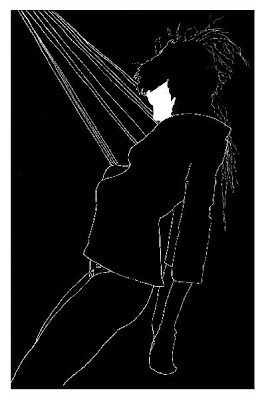 An Antipodea, Stories Like These and Griffin Independent present an Australian Premiere of TATTOO by Dea Loher at the Stables SBW Theatre.

So the booklet goes: "For 30 years Griffin Theatre Company has been at the forefront of New Australian Writing. In 2009 we're putting Griffin's Mainstage Season of New Australian work in a global context with the launch of Griffin Independent, a season of new, cutting edge international companies. Berlin - Costa Mesa - Dublin - New York - London. You would have travelled 53,725 kilometers to catch the original productions..... (Blah, blah, blah)... Griffin Independent brings some of the most exhilarating contemporary writing to National attention....."

And it is a very impressive lineup of playwrights: Neil Labute, Martin Crimp, Falk Richter, Jose Rivera and others and on paper looks great and something to look forward to. [Although many of the plays have been around awhile (Cutting Edge??!!!!)]

For example, the first offer in this season is TATTOO by a German, Dea Loher. Her play, translated by Michael & Michael was written in 1992 - 17 years ago!!!! She has written another nineteen plays at least.

It deals with a family of women living with a quiet but dominating father (called Oven-Wolf) who after the retreat/breakdown of his wife (called Dog-Face-Julie) indulges in an incestuous relationship with both his daughters (called Anita and Lulu), in turn. He impregnates both. A male outsider (called Flower-Paul) is drawn into the circle and after a futile attempt to begin a relationship - marriage with the elder of the daughters, finds himself drawn to gun possession which may result in his own death. Detailed this way the text appears to be a familiar melodrama. (Scarily it pre-dates the Josef Fritzl case by many years.) But, listen carefully it could be more than that.

This production is not a very auspicious beginning to this season. I have attended this production twice. The play text is not available so I returned to listen to the writing more closely. Dea Loher has been very prolific as a writer over the last years and she is highly regarded for her dialogue spareness and the heightened poetic inclinations. In this translation this is very well served.

However, the direction (Rochelle Whyte) is so uncertain that it has almost obliterated the skill or promise of the writing. The director has encouraged and permitted so many clashing styles of acting that the the tone of the piece is confused and hard to read: jangled!! On one hand we have some representational work of an actor playing a dog/woman (Sandra Eldridge) with a symbolic muzzle and held paws, dressed with fluffy bits of what I presume were hairy dog patches, and on the other hand a full frontal, relentless and noisy and very superficial naturalistic reading of the core role of Anita (Sophie Kelly) dressed, hair dressed and made up in a very bizarre set of design choices (is it, too, representational? If so, of what? - Nothing in the text remotely supports what I see, try as I might.) It is not very good work by this actress, misjudged at almost every minute. In between, we have the other actors sliding from one "gestural" choice to a "naturalistic one", back and forth, just what style are we playing now? It is very distracting. And I gave it a second go. Depressingly, it still was.

This is a new playwright in terms of my experience and I am pleased that the Griffin Independent have taken on this task for the year but Ms Loher will need another production for us to appreciate what her country men know.

The playwrighting, in my two experiences, has been obfuscated in all areas of the production; Direction (Rochelle Whyte), Design (Amanda McNamara) and Acting (Sophie Kelly, Megan Drury, Sandra Eldridge, David Ritchie, Simon Corfield.) The "buck" must stop with the Director.