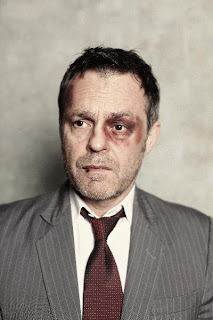 CONCUSSION IS A VERY GOOD PLAY. It seemed to me to be a play about the World Concussed. We are shown six characters, some of them functioning in areas of social responsibility that were once (and maybe still are) Pillars of the Community: Doctor, Police Officer (detective), and then two more modern “pillars”: marketing consultants, a spin doctor and, sadly, a young representative of the future, “a male potential dropout.” This is a play where people have been given, in our present civilization, the ability to move the moral principles, boundaries, gradually, beyond what might be regarded as acceptable behaviour to achieve and maintain a life style and be tolerated, even forgiven. It is about the tragic crossing of what were once called public moralities or standards to pursue and maintain, I guess, status and wealth. The film motto: “Greed is Good”. I suppose, now, IN 2009, we are reaping what we have sown. The recent court cases of a Judge and sporting stars, the collapse and rewarding of our high flying corporate consultants are examples of our present cultures health and retrieving value system.

All of the characters are morally concussed. The Police officer (Caesar) is literally concussed and in the journey back to a physical equilibrium decides that he must also re-establish a moral equilibrium. He must tell the truth. He must accept responsibility for the murder of another man that resulted from an unprovoked act of violence that resulted in death. He wishes to make the TRUTH, his Public Statement, in a court of Law.

The spin doctor (Katerina), appointed by the authorities “to hold his hand“ in court, in an attempt to maintain her reputation, attempts to argue him out of his decision to tell the truth and in desperation assaults the officer, “severely”. Katerina also walks away from a friend on a bridge (James Junior), after reading his suicide note, gives him a kiss and “places the (suicide) note in his hand and leaves him” to allow him to jump. She is also engaged in a sexual relationship with a 15 year old boy (Sergio). This spokeswoman is morally reprehensible in every way but believes that her actions are actions that are necessary to maintain her career and complement her lifestyle.

The vile mendacity of the marketing consultant (James Junior, Junior) is enacted in his cool decision of accepting promotion above his own brother, at his brother’s expense, which results in the brother’s suicide, and in his dreadful pursuit to destroy the woman he can’t have anymore by any means possible i.e. moral blackmail and bankruptcy, by using private information in a litigious divorce settlement.

Sergio, a 15 year old boy/man, brought up by a single parent,Caesar, has dropped out of school, unbeknownst to his father, and is having a very heated sexual liaison with a much older woman, and then whilst having all the fun has no sense of his responsibilities and posts his adventures including photographs on the internet without permission. All rights, he protests, but with no sense of his responsibilities or criminal actions. Worse, with no conscience.

James Junior the least of the concussed still causes his own death. He jumps from a bridge.

The doctor (Julia) to maintain her fledgling personal relationship with Caesar, also physically assaults him – “she beats him until she is sure that he will not remember a thing.” She can’t have him in prison by confessing his crime: she says ”Your guilt is Western luxury, it is too much democracy. Why can’t we just go on living our lives, without flaming every little ember of desire to be ‘good’. We can be prosperous. We will be respected. Let us just – start again. Forgive yourself. We can continue.” Caesar’s need "to flame every little ember of desire to be good” will be the end of this world of fudged morality for her. Her life will collapse.

Julia, the doctor, welcomes us to the play with a speech, directly to us, and she declares “This is not going to be another tragedy.” She stages this play as her thesis for this argument. Julia declares in this opening speech, ”We have a window of opportunity – a chance for change – we can become a comedy!... Vivid – stupid – contagious and we CAN and we WILL and we MUST – reinvent ourselves if we are going to survive….. Tragedy is an incident, comedy will be our landscape.” But the unravelling of this story proves to be the opposite for Julia when she finishes in physical violence on the man she loves to hold onto what she believes is essential to live a good life. She loses control of the play and her world. If comedy is a tool to produce optimism then CONCUSSION is certainly a tragedy as it only concludes with pessimism. Tragedy is defined as “a serious play with an unhappy ending especially one concerning the downfall of the main character” than this is a tragedy. Julia does not end well, despite her manipulations. But defiantly the last line of the play, from Julia after her beating of Caesar to a silence is “This is not going to be another tragedy.” The ironic comic statement undoubtedly makes it so.

CONCUSSION IS A VERY GOOD PLAY. The satire and ironies are withering in the blistering dialogue that Mr Mueller has written. In this way it is a comedy, but it certainly is not “ultimately a triumph over adversity.” Julia and all the others (except maybe the physically concussed Caesar) are deeper in the mire of their problematic morally bankrupt reality at the end of this play.

The problem is that this production by Director Brett Adams is not a very good reading of the play. Mr Adams begins with a wrong headed, ugly Design solution for this work (Brad Clark and Alexandra Sommer). A grey, perforated set of metal panels and some opaque glass windows with a metal staircase at one end leading to a “bridge” walkway set in the space independent of the back wall; a grey floor in a black walled box with rudimentary, “chunky”, portable furniture, set at an odd skewed angle to the audience. (It looked like leftovers from the Gallipoli set.) We move from restaurant, bedroom, a park etc with no discernible aid from this clumsy set. The Lighting Design (Luiz Pampolha) moves from a musical disco/event look to naturalism. Both efficient. The sound score seems to have had a lot of attention but sounds like a selection of the director’s favourite music samples. (Basil Hogios.) Atmospheric but not always a clear support to the play as written.

The staging is often very clumsy, often resulting in the full company dispersing our focus with their backs to the audience and no perceptible craft in guiding our focus to the journey of the play. The acting, that seems to have been demanded, is of a very high quality. It just seems to have been very superficially guided by the director. The opening speech by Rachel Gordon for instance, on the night I attended, had only a shallow reading, seemingly to ask us to simply sit back and enjoy and imagine the play, much like the opening Chorus of Henry V. It confused me, in that we seemed to be appealed to see only a comedy to follow. There was no sense of the irony or satire of Mr Mueller’s intention. It took me several scenes to fight my way out of the wrong impression to the tenor of the work, if you listened carefully to the text. The dance interludes (Movement by Fiona Malone) seemed to be useless in developing the story or carrying it forward, and were not easily observed, as the lighting made it hard to clearly perceive what was happening in them.

The actors delivered the material with intelligent clarity at a cracker of a comic pace. One had to stay with them concentratedly to keep up with the wit. What it lacked was depth of perception and the irony of Mr Mueller’s work. Exceptions to the general appearance of the acting style, was a brave and furiously intelligent struggle by Belinda McClory to bring a real and more accurate reading to her scenes and this paid off well for Chris Ryan and Sam North when they were engaged with her. They had, through the power of Ms McClory’s passionate, committed and highly intelligent attack a way of similarly reaching for more than comic technique, and bringing the deeply felt social criticism of the work to our attention as well.

The technique of the writing style with overlapped narratives and time juxtapositions that are not necessarily continuous is demanding. Certainly it took my reading of the play to capture that element of the writing, it was not clearly evident in the action or cueing for the audience in the direction of this production.

It is necessary to discern the difference between the quality of the writing and the quality of the production. In this case I feel the writing is underserved by this production. CONCUSSION IS A VERY GOOD PLAY. I reiterate. (For $10 you can purchase the script as your program listing. It is well worth having. The Griffin do this with all their plays - a habit well worth emulating STC especially with new Australian work.)

Posted by Pearly Productions at 11:05 PM