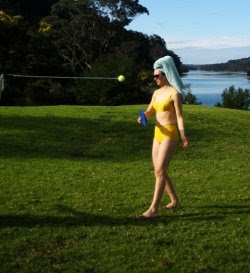 The last work presented by this “magical” group was POLITELY SAVAGE at the old Performance Space, 2007 and I have been keenly awaiting their new work, whatever it might have been. It was worth keeping in mind and memory.

NIGHT GARDEN has been “Developed through residencies at Performance Space, ArtsHouse, Hot House Garden Theatre and Bundanon Artists’ Trust. NIGHT GARDEN continues (their) exploration of the contemporary Australian Gothic through a blend of performance, puppetry, video and installation. This dark tale traces the fractured relationship of a woman and her son in a distinctively suburban landscape. Performed in traverse and viewed through the skeleton of a burned house, (the company) want NIGHT GARDEN to immerse the audience in a haunting, visually spectacular, dream-like landscape.” All this it does.

The audience is sat at opposite ends of the space on banked seating. At the centre of the space is a small raised wooden platform surmounted by a wooden table. Beneath the table there is an indentation. Encasing the space and floor is a small glasshouse-hothouse, with two side entrances. Outside the house is a carpet of furs, surrounding the house where there might otherwise have been grass. The side edges of the house facing the two audiences is a gauze wall on a slanted perspective with a screen hinged door, pushing through to a raised wooden platform with a chair. There are two glowing in the dark light sculptures of a goose at either end and a setup for a bat and ball game. On the surfaces of the wall screens during the show, still images and video are projected. The lighting is very effective and atmospheric. The Sound score similarly stimulating (although on the afternoon I saw it there was some noisy accidental intrusions.) The actors are miked. The mother figure is created by three performers, Halycon MacLeod, Clare Britton, Katrina Gill and the son by Sam Routledge. Whilst the direction of the movement etc is unobtrusive and the resultant effect is wonderfully provoking and often disturbing, it is when the performers begin to act and speak the text that the artistry frays a little. Shouting with miked voices is not a very useful technique. Mr Routledge seemed to be over enthused in his physical and vocal choices and tended to overplay the youthfulness of the son, and in his excitement caused the microphone to spit out ugly, probably unscripted noise. Shouting is not the only choice to convey the story. The speaking of the text was the least effective part of the performance by all. More time needs to be given to the writing and / or vocal technique in delivering it. Margaret Cameron as Director /Animateur should look at this minor, in relative context of the other elements, detail in a more refined way.

In fact, beside the hauntingly beautiful Set, Lighting, and Sound, the most magical elements are the fabulous puppets and their “life”. When these elements are centre stage the gothic bewitchment and spell is most powerful. The sexual tensions of the pre-pubescent son and the sexually frustrated mother figure are truly Angela Carteresque in their lubricious renderings. Fox and fur. Goose and feathers, etc. The puppets are built with such refined detail and the managing of them seemingly so expert that the world and atmosphere they create is totally believable and densely redolent with sexual ambiguity and disturbance. Scarily haunting, drenched in memories deep in my personal psychic grave of denial. Hidden in my catholic guilt, till provoked back to me by this performance.

The overall experience was not as complete as my remembered experience of POLITELY SAVAGE. True, NIGHT GARDEN is out on its first exposure and I am sure it will tighten and expurgate as the live audience responds. The company travel to Melbourne next. I want to see the work again and embrace its maturing. MY DARLING PATRICIA have created a wonder once again. Thank you.