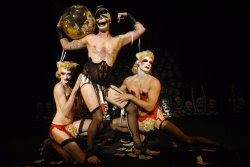 Last year through the auspices and industry of the Performance Space (and presumably Fiona Winning) a program called QUICK & DIRTY was put together. From what I can gather there had been once a regular presentation of this “work” but it had fallen off the “map”. Victoria Spence was invited to curate it. It was an unqualified success. So this year the project was blocked into the Performance Space output again - much credit to them.

The work presented represents a mixed bag of interests and skills, a very wide community of young, emerging and also very sophisticated older hands; a group of artists from many disciplines. There are artists, performing artists, alternative skill/disciplines artists (ie circus, burlesque cabaret etc) new media practitioners (i.e. Video, sound artists, photographers etc ), costumiers, musicians, writers, movers, even dancers and actors. The space and time is given to what, last year I heard some front of house call “riff raff”, (keeping them within a bourgeois boundary of OHS rules may have been taxing!!) but what they may, themselves, call “grunge”, ”feral”, even “cutting edge”, but really, “alternative artists” fits the bill. The work is sometimes haphazard and appears to be undisciplined even grossly amateur; sometimes it has Real ART intents (whatever that may mean), sometimes it has political objectives, sometimes it looks like a try out call for “RED FACES”. Whatever it is, and it can depend entirely on your own artistic sympathies and/or mood on the night, it can be a fascinating, exciting, frustrating, boring, funny or a debilitating experience.

So, this year Vic Spence, Mat Hornby, Matt Stegh and Justin Shoulder curated a series of performances over three nights. The program was mostly stable but there were different “guest artists” each night. I attended Saturday. The night began in the foyer at 7.30, with a slow to take off, aerial act: CANDY STRIPE CIRCUS AND CIRCXRS called Suspended Animation, (Three aerialists on bungy jump like harnesses) to be followed by a remarkable and nostalgic turn by CINDY PASTEL on a side stage of a “drag” number called Ruby Red Dress (leave me alone). It is the essence of this performance and this performer that is on show at this event and is given proper respect as not only for what it is: a “drag act”, but the breadth to be seen as an expression of an entirely committed artist. Judgements on material, costume, choreography and political intent are all sewn into the conception and “rough house” presentation. There is a fervour and even a fever of energy from Ms Pastel, that in this environment lifts this act, in this space and time, into a place that could be engaged in at the MCA. A magnificent commitment to a mode of artistic expression.

In the theatre space that was set up in two modes, a set of cabaret tables on the flat floor in front of the stage, and the usual steeply raked seating bank. The first half of the program was a mixed success. Beginning with DEAN WALSH: The Bends (it seems writing is not his skill but his dancing is) through to what looked and sounded like a very nervous singer (George Tillianakis) to a divinely conceived and hysterically performed creation by CELIA CURTIS called Picnic At Hanging Rock where many impersonations of many of that iconic Aussie film’s characters are affectionately spoofed, accompanied by many costume changes and puppetry inventions. Poor Miranda has, unlike in the source material, her adventures and demise at last expedited on the stage. Who would have guessed that a large green crocodile was the fate waiting for Miranda? Maybe a sequel can be conflagrated from Ms Curtis’ imagination!!!! Does Peter Weir know of this plotting?

The second half of the program after a very long interval (well we all got to meet and greet and imbibe a lot, maybe the bar profits helped subsidise the event?!!) began with the usual “amateur” looking antics of FRUMPUS (frumpus r us) that was segued into a totally clever lipsynched act by DREW FAIRLEY called Hotel California. Witty, deft and oh so smooth. Performance Visual Art from ANNABEL LINES: Dunce Vignettes and later a piece by JUSTIN SHOULDER: Coels Calls from were fascinating for there subject matter and wonderous in the commitment to modes of expression. Mr Shoulder’s work with a beautiful tree prop and a stunning and mysterious costume accompanied by a complex Video Projection and Sound design. As strange as the experience was, to watch and grasp this piece, several observations of it may be necessary, the creative effort in the execution should be applauded. This is also true of Ms Lines’ work - invention and deliberation that solves and presents complex and often arresting images.

My favourite two pieces followed. KKNOPANTS presented by The Diner Lady. A subversively sexual presentation by a thoroughly sexy “cowgirl” artist accompanied by a marvellously sophisticated sound track, left one breathless with admiration. But the outrageous and audacious act of the night was a highly sophisticated music hall/burlesque turn by Mat HORNBY and Matt STEGH in a loving homage and “piss-take“ of sketch comedy that has a long, long and now valued history called Dickie and Dickie. The meticulous conception, design and writing and performing of this material gives much to be admired. Two wonderfully subversive but divinely embraceable characters in a gorgeously painted set of props and ultimately video back drop, with a teasingly long but funny set of routines and subtle and not so subtle visual jokes (chocolate smears on the bed cover) ends with a crazy and “rude” song about receiving invitations to go to Balls and the skite of claiming that their own balls are the biggest. Ha, ha. Exquisite in all of its loving by these two young artists. MCA where are you? (They are the founders of a performance called ManJam and have been responsible for the organising of events of a similar kind in the underground circuit of artistic endeavours for years.)

30 years ago on a Sunday night in a loft of a cheap restaurant called GARIBALDI’s in Riley St in East Sydney there was, for a time, crazy presentations of fringe creatives who would after a phone call to whoever was organising the night book a spot and then just turn up and do it - whatever they wanted. The booze was plentiful and there was much cheering and booing depending on the mood of the audience and the quality of the work. This still goes on but you need to be in the know to find it .So it is with much gratitude that we can give Ms Spence, Hornby, Stegh and Shoulder for their devoted work. And much credit must go to the PERFORMANCE SPACE who seem to know that it is vital that all elements of the diverse artistic community find support and means of expressing itself. The programming of its work is simply amazing in its diversity and vision. I wish the new Director Daniel Brine a hearty welcome and look forward to what he will give us following the much vaunted work of his predecessor, Fiona Winning.

Posted by Pearly Productions at 4:41 PM