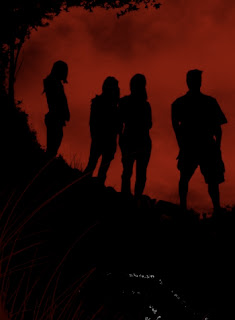 DNA is the third play of Dennis Kelly that we have seen at the Old Fitzroy. (Different Company productions, however.) Debris (2004), and Love and Money (2006) being the others. DNA was first performed in the Cottesloe Auditorium of the National Theatre in February 2008. It was originally written for the National Theatre's Connections project, which pairs young actors with new writing.

Dennis Kelly says "it's about a group of teenagers who do something very wrong, and then cover it up." Kellie Mackereth, the Director says it's a play about being human. A group of young teenagers have caused a young boy to die. They then concoct a cover up, that has dire consequences for an innocent man that is further compounded when the original victim re-appears amongst them. What was once an accident now becomes a planned and cruel murderous crime. These young 'children' represent the survival instincts of the human race. It is not a pretty picture. Out of the mouth (actions) of babes the sometimes vicious cyclical history of man's behavioural patterns emerge and are marked out. The DNA of the human species has hardly evolved. Is demonstrated. Perpetuated for us to see. It is an alarming and cleverly written observation, a modern LORD OF THE FLIES.

Kellie Macereth has gathered together a fine, selflessly committed ensemble of eleven young actors, and with a beautifully simple and atmospheric Set Design (Jessie Giraud) and Lighting (Tom Brickhill) accompanied by a very apt Sound Design and Composition (Rosie Chase), (although I thought the opening song was overstated, over blown - a blemish) has given us a very engrossing night in the theatre. The Costume design, also by Ms Giraud, is especially successful in creating a consistent and believable world of young teenagers. The picture composition of her actors is much to be admired in such a confined space. The actors are tightly managed individually and collectively. The focused ensemble concentration is pleasing and supportive to the stylistic choices of the staged play. Naturalism is banished and a heightened presentation elevates the play and the writing into a ritualistic atmosphere - a poetic statement of some stature despite its sordid doings.

The play is only 70 minutes long, without interval and there is not a moment (after the opening song) out of place. Each of the actors, and some of them have only one scene or a series of short connections, is so thoroughly connected to the play and its content, that it seems unfair not to mention them all: Stephen Anderson, Augusta Miller, Sarah Snook, Paul-William Mawhinney, John Shrimpton, Josha Tyler, James Elliott, Olivia Simone, Sophie Cook, Benjamin Giraud, Kit Brookman. A wonderfully welded ensemble.

Sarah Snook has the most textual responsibility and her technique is so flawless in its apparent spontaneity of thought that it is poetically mesmerizing. As Leah, Ms Snook represents the tribal wise person: religion, philosophy and science theory. Paul-William Mawhinney, the lethal cult leader, mostly a silent listener, but a ruthless diabolical survival streak is terrifyingly real in his many faceted choices when Phil takes charge. The cult mesmerists from Hitler through to contemporary times are flickered across his performance-a true reptile. Olivia Simone, the conscience free sadist is powerful, if two dimensional, in her understanding of the character's function and action. A truly terrifying piece of work (a re-incarnation of Judith Anderson as a Mrs Danvers like personality from REBECCA!!) Kit Brookman in a short scene as the resurrected Adam is haunting in his few moments. But best of all, for me on the night I attended, was Benjamin Giraud, playing the victim, the cry baby Brian. The levels of confusion, innocence and sacrificial lamb that he exuded plumbed the depths of my empathy (or was it identification of my role in the turn of the world plan?)

Dennis Kelly suggests that the roles of his play are interchangeable. The role breakdown amongst the casting is as open as you want it to be. It would be interesting to see this cast alternate the sexual role playing and taking on different roles each night. Fascinating, to see the new dynamics and balance of power play. As it is, it is very worth while visiting in this fixed casting production.

I just read this play because I want to use one of Leah's monologues for auditions at the end of this year. Good play, insightful post!