Firebird and Other Legends 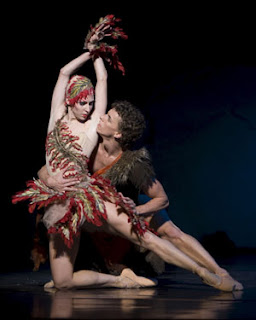 Lana Jones and Kevin Jackson (the ballet dancer... not the blogger.)
The Australian Ballet presents FIREBIRD AND OTHER LEGENDS at the Sydney Opera House.

This season of ballets is the conclusion of the Australian Ballet's celebration of the Ballets Russes."FIREBIRD AND OTHER LEGENDS features three works that were performed in the first three years of Diaghliev's Paris seasons in 1909."

LES SYLPHIDES, choreography by Mikhail Fokine, music by Frederic Chopin arranged by Roy Douglas. This is a ballet that for most represents the image of what ballet is in most people's eyes. A ballet danced by the female dancers in white, long romantic tutu dresses, fake puffed sleeves, garlanded hair and pointe shoes. (There is a male dancer as well.) It is a plotless abstract ballet in one act." It is considered a "meditation on beauty".....and is a known as a "supreme test of a classical dancer's abilities'' with performers required not only to dance with perfection of line, musicality and feeling, but also in absolute unity with the ensemble."

There is a sense of delicate control, energy and focus held in concentrated breath. The movement of the costume, the elegance of gesture, the periphery awareness of the ensemble and the role one plays as a soloist within and part of ensemble is perfectly observable. The Chopin music floats and supports the movement and the choreography is felicitously nuanced to the sounds from the orchestra. The ballet begins with a tableau of dancers posed, and it finishes in the same book end image. In between, there is a gentle seduction to the movement and the skill of the dancers. The ensemble is led by Leanne Stojmenov, Dana Stephenson, Rachel Rawlins, and Yosvani Ramos. It is an understated experience, and the impact of its beauty does not fully register until the final re-iteration of the tableau pose and the curtain descends.

PETROUCHKA, choreography by Mikhail Fokkine, music by Igor Stravinsky. First presented by the Diaghilev's Ballets Russes in Paris in 1911, considered by most as the company's masterpiece. The piece is set at the Butter Week Fair in St Petersburg 1830. Made up of four scenes the first shows us the bustling crowds gathering and browsing the fair grounds. The second scene introduces us to the three puppets of the showman/magician (Colin Peasley): Petrouchka (Daniel Gaudiello), The Ballerina (Gina Brescianini) and the Moor (Paul Knobloch). Petroushka is hopelessly in love with the Ballerina who is in love with the Moor. The third scene shows us the romance between the Moor and the Ballerina that is disturbed by Petrouchka and ends with the unceremonious exit of the jealous puppet. The fourth scene shows us the fair at its height. Dance succeeds character dance and builds to a wild climax led by "a devil's disciple" (Tzu-Chao Chou) that is disturbed by the argument among the Puppets breaking out in the crowd with the Moor finally striking Petrouchka down with a sword. The crowd call the police to what they think is a murder but are surprised when the Petrouchka figure is found to be only a doll. The crowd disperses but the Puppet master/magician is confronted by the grieving spirit of Petrouchka.

The Design borrowed from the Birmingham Royal Ballet is based on the original By Alexandre Benois. It unfortunately looks cramped on this stage and appears to cramp the dancing of the corps. It does not have the magic of illusion that the piece would better benefit by. The colours of the set and costumes are fascinating and are resonant of another time of folk culture.

"Nijinsky created the role of the unhappy puppet, and it became his favourite role..... he turned himself into an ungainly and grotesque puppet bringing such genius, such intensity and pathos to the role that Sarah Bernhardt upon witnessing his performance exclaimed "I am afraid, I am afraid, for I see before me the greatest actor in the world."

Daniel Gaudiello has the floppy character choreography well in control and even the simple execution of the movements creates a moving sense of pathos. What the dancer seems to still lack is a deep identification with the character. The character is mostly delivered through the external commitment to the choreography (which demonstrates its genius, for one is still moved) without any real internal sense of the tragic obssession of Petrouchka. This dancer is not yet an actor that Bernhart need fear. Ms Brescianini and Mr Knobloch similarly dance well and prettily but not convincingly as character. (The Moor's costume is, of course, for a contemporary audience a severe obstacle. Benois originally conceived the character of the Blackamoor "as the embodiment of everything senselessly attractive, powerfully masculine and undeservedly triumphant." This costume, original or not, now, reads as a disrespectful comic aberration, reminiscent of the old Minstrel shows.)

The great triumph is the music of PETROUCHKA by Igor Stravinsky, this being a revised version from 1947.

The final ballet is a new work, based on the story of the THE FIREBIRD (Ballets Russes, 1910), concept and choreography by Graeme Murphy. Set and Costume Design by Leon Krasenstein. Lighting Design by Damien Cooper. Music by Igor Stravinsky.

Kostchei (Chengwu Guo), an evil magician has enchanted a kingdom including the princesses . To experience true love Ivan Tsarevich (Kevin Jackson) must free one of the princesses, Tsareva (Danielle Rowe). On encountering,in this cold kingdom, the Firebird (Lana Jones), he captures her and in return for her freedom receives a magical feather that acts as a talisman in his struggle with Kostchei for the beautiful princess. Assisted by the Firebird he triumphs and the garden blooms.

"Upon hearing the music the new music of THE FIREBIRD, the dancers were dismayed; to them it hardly sounded like music at all..... Serenely confident, Diaghlev, who prided himself on seeing genius where others saw eccentricity, turned to (the ballerina) Karsavina and said,"Mark him well, he is a man on the edge of celebrity." As he was so often, Diaghlev was right. On the opening night , "the composer was called and recalled to the stage to acknowledge the applause of the audience...... THE FIREBIRD was a triumph for Fokine and Stravinsky."

In the program notes Mr Murphy says, "I could not but be historically aware of all that had gone before. Above all, the weight of Stravinsky's musical masterpiece dominated". He goes on to say that he dare not deviate too much from the expectations of the audience and consequently adhered closely to the original synopsis.

The Set Design (Leon Krasenstein) is dominated by a large cracked egg shell at the back of the stage and surrounded by other half shells from which either birds or snake/lizards have hatched. It is a cool and science fiction landscape lit wonderfully spookily (Lighting Design: Damien Cooper). The shells serve as props for the lighting and also as useful tools for the choreography. The costumes by Mr Krasenstein are an odd mixture of the heavy clumsy cloak of the prince to the skimpy feather skirt and "sam brown" belt of feathers across the torso for the Firebird. It works but is slightly disconcerting. The Corps de ballet costumes for the princesses are also grounded in earthy weight at first, with the celebratory dresses and skirts of the men in the finale, reminiscent of fanciful costume from eighties sci-fi movies, or from a strange production of the musical HAIR. Is it just me becoming familiar with the concept or is it odd? In any case they have stayed with me. The mixture of the Bakst green and blue combination with painted flowers superimposed in black over the colours are striking, if not slightly kitsch.

The choreography has all the hallmarks of a Murphy dance.Elegant sweeps of movement and patterns. Sexy posing on props. The startling choice of design for Kostchei as a snake/lizard is very interesting and the combined look of the Firebird has for me the resonances of the indigenous animal totem worlds of Australia. It is fascinating and ominous in its interaction. I enjoyed the choreography for Ms Jones and her dancing and admired the support work of Mr Jackson as Tsarveich. I wished he had had more freedom to move and felt the costume sometimes awkward for expression. This was true of Mr Guo's duties as I felt that the design also inhibited the possible options for dance. Ms Rowe danced the maiden in distress cleanly but not with much character. It was, still, a very enjoyable experience if not as exciting as Mr Murphy's SWAN LAKE. Once again the music, using the 1945 version was the triumph of the night. (Conductor: Nicolette Fraillon). Only re-acquaintance with this new work and time will measure Mr Murphy's contribution for me. As yet I am not sure of my response.

As a footnote,I would like to recommend the essays in the Australian Ballet program. Lee Christofis, Martyn Pedler, Dr Mark Carroll and Valerie Lawson have made contributions that, unusually, justify the $15 cost.

Note also that I was required to pay the Opera House Trust $5 extra to my ticket cost to attend a performance of the Australian Ballet at the Opera House, apparently to keep the Box Office open longer hours. I did buy my ticket at 7pm, when, I presume, it would normally have been open. Strange, and I must say, personally, irksome to do, as I do not feel the reasons expressed in a report in the Sydney Morning Herald were reasonable justifications. I certainly at the moment consciously decide whether or not I will attend certain showings based on my own resisting of the extra "Tax" to attend a performance at the Opera House.
Posted by Pearly Productions at 10:27 AM

Great post thank you. I'm a former classical ballet dancer and have performed the Firebird with Ballet Dresden (SemperOper Ballet) so lovely to read your post!