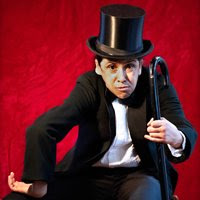 KAFKA'S MONKEY, based on A REPORT TO THE ACADEMY by Franz Kafka (Short Story) and adapted by Colin Teevan is delivered as an enacted lecture by Red Peter The Ape to an Academy recounting, particularly, the last five years of his life. His experiences and journey from being shot and captured, caged and transported, and then choosing a life as a variety act in the theatre (rather than in a zoo), which we get to see in little glimpses of tap and soft shoe shuffles with a cane, and Hat Tricks, and of his subsequent education: observing, dressing and learning to speak (at first a haltering "Hello") and an introduction to rum, the receiving of a companion, an ape partner, and now the honour of a Lecture to an esteemed Academy of the Learned. Under all this is a yearning for freedom, a way out. His sense of unhappiness permeates his lecture. The forgotten former life, as he adapts to that of man's, breaks through in his preference to eat the lice from the head of his audience, his delight in sharing bananas, and he, unconsciously, finds himself in the physical and vocal extremis of his earlier mode of expression with instinctive gesturing and noises of grunting and hooting. The melancholy of his life, aided and abetted by the introduced addictive need for alcohol, brings an aura of tragedy to the tone of the lecture. The empathy for Red Peter becomes a reflection of our own predicament. Is there a way out? Is there such a thing as freedom? Is there no exit?

This 50 minute adaptation is straight forward and is interesting but not revelatory.

What is interesting, absorbing, revelatory and astonishing is the performance of Kathryn Hunter. Garbed in a period suit of top hat and tails (Costume Design Richard Hudson), utterly absorbed, inhabited and seamlessly executed is the actress as Red Peter the Ape. A body that is astonishingly flexible and is at the service of an acutely observant artist, the physical life brilliantly inhabited and sustained. (Movement assisted by Ilan Reichel). It is matched with a vocal timbre and skill that is utterly amazing to hear. The text and the animal breakouts beautifully controlled and communicated. The gradual accumulation of the pathos that the audience receives is delicate and worryingly concerning. Care and self examination is what I felt as Red Peter found, relievedly, a door from the lecture floor.

If there are bench marks for the acknowledgement of the actor as artist, here is one of them. Just as Cate Blanchett in her creation and performance as Richard II, in THE WAR OF THE ROSES, gave us a performance to savour this year, so does Ms Hunter. It must be seen and stored as a highlight of the ephemeral art of acting.

The Set Design (Steffi Wurster) is elegantly simple and clean, dominated by a huge portrait of Peter's given partner. The Lighting Design (Mike Gunning) enhances the images and acting and is accompanied by an eerily haunting and apt Sound and Music Design (Nikola Kodjabashia). The director Walter MeierJohann should be congratulated on the beauty of his production's understatement.