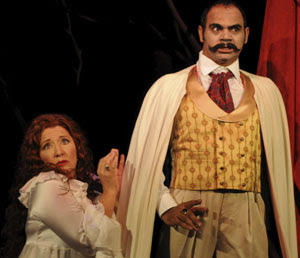 Company B presents a Company B & Melbourne Theatre Company production THE MAN FROM MUKINUPIN written by Dorothy Hewitt and Music by Jim Cotter, at the Belvoir St Theatre.
The production by Rodney Fisher of The Man From Mukinupin by Dorothy Hewitt at the Drama Theatre in the early eighties is one of those theatrical memories that has stayed with me. It was a magical and translating experience. This new production at Belvoir confirms for me, my belief, that this play is one of the great heritages of the Australian repertoire.

Dorothy Hewitt’s work had always been controversial, not only because she “strongly established her career as a stylistically unpredictable and experimental playwright” and often bemused and befuddled her audiences of the time, who were used to more direct methods of story telling, but because her subject matter was often concerning areas of everyday living and culture that were not so publicly spotlighted. And not only was it the sheer audacity of writing about such things for the theatre that outraged or shocked her audiences but the evidence that it was so often so humanly raw and politically “out there” – “in yer face” for its time.

The menstrual blood of BON-BONS AND ROSES FOR DOLLY, the communistic socialism fervour of THE CHAPEL PERILOUS, the sad alcoholism and violence of THIS OLD MAN COMES ROLLING HOME , which shocked the audiences of the time, were all examined with passion and compassion by Dorothy Hewitt, and the facts of real life as she lived and knew were not diluted in her writing to fit the tastes of a society that she felt were often hypocritical and blindsighted. A kind of social realism. It was the fact that she was so consciously observant of the reality of some people’s ordinary lives mixed with a great gift for poetic expression, that flummoxed some of us even further. Dorothy was a poet of some note. It is this fairly naive contemplation, of mine, at the time, of the compartmentalising of the rightness, correctness of form, style and content, that created unease and puzzlement of what to make of her work for the theatre. Then Mr Fisher’s production appeared and I had a “Road to Damascus “enlightenment.”

Ms Hewitt had her feet firmly in a real world and a poetic gift of expression that was reaching for the heavenly parts of our natures. Zeek in Muckinupin, one of the eccentric outcasts of this town speaks: “Sun, moon, and stars, all sweet things…. The stars are above, wherever we are. We walk the earth and gaze into eternity, we ride the Andromeda, see the holes in heaven…” This, last night, struck me as the essence of my experience of this play, now.

Wesley Enoch directs this play with a conscious enveloping of his indigenous origins and his own activist and artistic bent to bring us a production that is brisk and brusque, real and romantic, nostalgic and socially responsible and critical, and rich in its demonstration of not only Dorothy Hewitt’s imaginative enquiry but also rich in his love of the material: its content and form. With his Designers, Set and Costume, Richard Roberts; lighting Rachel Burke, he has created a pleasantly magical environment for us to observe and absorb the world of Mukinupin. Then, using the original music of Jim Cotter, with the arrangements of Alan Johns, who along with Wayne Freer, play infectiously robustly, live, throughout the performance, the aural support is just as persuasive.

I understand that there is illness among the cast which may account for sometimes unevenness in the quality of the work of the actors – sometimes the singing which is obviously quantifiable or the acting which may be a matter of taste. But last night I enjoyed especially Roxanne McDonald as Clarry Hummer and her duet act with a sublime reading of Clemmy Hummer by Valentina Levkkowicz. The two of them sitting in the downstage corner, after the musical and mysterious wanderings of disembodied voices of the opening of the play, pounce onto the choral conceit of the writer’s invention for them with such delighted love and virtuosity that the launching of the audience into the whimsical cultural elemental memories of the play is assured. The compassionate drawing of the severe and hypocritical, (a woman of her times) of Edie Perkins by Kerry Walker is the rudder and guiding force of artistic shape throughout the play. The serious portrait of a maybe unconsciously guilt ridden woman, washing her hands and sleep walking to the verse of Lady Macbeth through the landscape of Mukinupin is exquisitely and painfully drawn. Amanda Muggleton as the benign and affectionately drawn portrait of the thespian, Mercy Montebello, is gorgeous for its sexual equivocations and bewildered motivations, that plump down to pragmatic survival skills. David Page in three portraits of characters in the play’s landscape is delightfully impish in all and in the defining of the characteristics of each. (Sometimes clarity of utterance is a problem in appreciating the inventions fully. This, by the way, is my major problem, sometimes the muffled articulation of the speeches and songs prevented me from comfortingly, knowingly continuing my journey in the play. My comprehension was interrupted.) Max Gillies is especially loving as Zeek, a water diviner and star gazer. The problem of sometimes the acting or singing of the two juvenile leads affects the ultimate soaring of the production but it never prevents the material from impressing or for the characters from registering.

This play was “published in celebration of the 150th anniversary of the founding of Western Australia”. It must have been viewed as a Trojan Horse by some. The examination of the rape and genocide of the indigenous peoples, the violence of alcohol, the hypocrisy of the religious beliefs of the community, the lack of comprehension of blighted lives through marriage, war and disenfranchisement must have caused pain in 1979. For it, shatteringly, still does reverberate throughout this new rendering of the play. But the affectionate whimsical balances to these realities, the theatrical references, the Shakespearean quotations, the simple demonstrations of ordinary and simple but deep love amongst the human species keeps the play from being too caustic a confrontation. It is written with such balanced appreciation of life with all of its history, secrets and lies and honoured by this company with such commitment and admiration that I felt that I was watching one of the masterpieces of Australian playwriting. Is this also Australia’s Best Musical?

It's very unfortunate that Wesley Enoch got The Man from Mukinupin so wrong. I know a lot of people who have seen it, not a single one who was NOT utterly disappointed. I have been told people leave at interval every night. Some of the actors are not up to their roles, or are miscast; pretty Polly/Touch of the Tar, for instance, seems awkwardly girlish, perhaps because she is a strapping girl who looks about twice the age of her character? Polly has, after all, just put her hair up. But I agree with you about the wonderful Roxanne McDonald and David Page, Kevin. However, to have actors of the caliber of Kerry Walker and Max Gillies play 70-year old parents of a 14-15 year old girl is an utter mystery - the Perkinses are in their 40s, if that, and so lovingly played by youngish Judi Farr and Peter Carroll (from memory) in Rodney Fisher's beautifully romantic, achingly funny and strongly political initial production. In this production, these characters are merely satirised, with no life beyond the surface, at no fault of the actors. Amanda Muggleton, too, sends up the fabulous Mercy Montebello to such an extent that there is nothing left of the love Dorothy had for those kind of characters. The playwright's wonderfully wrought subtext, which lifts this play from an ordinary comedy to a landmark in Australian theatre, emanates from a sophisticated tone of irony mixed with celebration and love, has been overlooked in a poor effort of creating a funny-ha-ha comedy. The key to this play is that Dorothy celebrates what she satirises. That is what makes all satire work. Marin Holt

True, the age appearance of the senior Perkins look more like grandparents than parents. I was never really convinced of the physical work of Polly and Touch of the Tar. I also felt that the “white face” make up choice interesting and slightly provocative, but it was inconsistently applied throughout the journey and so puzzling. I felt that Mercy MontebelIo was pitched too over the top in the long scene with Jack. I, too, had had warnings that this production did not measure up to people’s memories of the past (Rodney Fisher’s production) but on the evening I attended I was able to comfortably transcend my qualms. Certainly the work has had time to settle in and find its rhythms and so I went with what I was seeing and experienced a play unlike any other Australian work. It was wonderful to see it alive on stage, even with its production warts and all. Besides its daring subject matter, it is the delicacy and affection that Dorothy Hewett had for the people of the world that she presents that wins me over, every time. Despite the production “flaws” the performance I attended was still an event worth savouring. One hopes to see another production of the work. The embracing of AWAY or THE SUMMER OF THE SEVENTEENTH DOLL as my favourite Aussie plays has shifted. It seems that irony is an element that is elusive in some contemporary theatre artists. I thought that that was the quality missing from THE REMOVALISTS as well. The double knowledge that the audience have about a character that the character does not have about himself, BUT the actor does, and that is the skill that seems not to be perceived accurately enough. Do you think it is a generational observation? I looked up the cast of the Rodney Fisher production. It was: Ruth Cracknell, Maggie Dence, Judi Farr, Colin Friels, John Gaden, Ron Haddrick, Jane Harders, Noni Hazelhurst. What an array of talent as only our hindsight can appreciate. Ron Haddrick and Judi Farr and Noni Hazelhurst were the Perkins family. The design Set by Shaun Gurton and Costume by Anna Senior with co-ordination by Melody Cooper. Thank you for contributing.

I too was disappointed by the direction of this project. Hewett should be seen more often and I would love to see this production again - in the hands of a more rigorous, imaginative (younger?) director. And yes, I concur with you Kevin regarding irony - almost absent from our stages. A shame. Kit