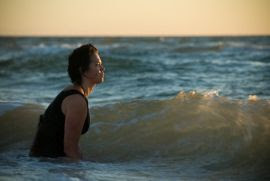 B Sharp and floogle present OLLIE & THE MINOTAUR at Belvoir St Downstairs Theatre.

The best thing about this experience is watching three actresses (Adriana Bonaccurso, Wendy Bos and Sarah Brokensha) reveling in the playing of three characters that they and the writer, Duncan Graham, and the director, Sarah John have collaborated in creating. Their curtain call exuding pride and satisfied joy. There is a naivety to this that is affecting, for there is not much else to take away and cherish.

OLLIE AND THE MINOTAUR by Duncan Graham is a new play first performed at the 2008 Adelaide Fringe Festival. It was nominated for the 2008 Bank SA Fringe Awards for Most Original Work and Best Theatre.(!!!) It has since gone on to a season at 45 Downstairs in Melbourne.

The experience of watching the play (at downstairs Belvoir) is that of a first or second draft that should have gone into the bottom drawer of the desk and left alone, appreciated as a promising effort. The playwriting needs much more work.

It consists of three familiar characters, good friends who meet for a boozy night, who are taken on a plot line that is a theatrically cliched revelation of old times and secrets that become rawer and rawer as the booze and the long day's journey into night progresses. The gear changes in the writing are clankingly wrung, (eg. the manipulations to the return to the "cave", both literal and metaphoric, with cooked meat pulled apart by hand in the candlelit spooky aura, due to a an electrical blackout!!!), and the use of Myth, in this case "the Labyrinth and the Minotaur", is extremely superficial and serves to underline, in my mind, the lack of real depth or insight of the characters or the situation. There is no echoing in the poetry of the "caves" of the great myths, merely a thin veneer of appropriation.

This production has had a long series of performances, (since March last year) and the actors have got themselves to a place where they seem to be performing learnt responses from other times. They tended, on the night I attended, to talk AT each other with no real sense of talking TO each other, or attempting to communicate to the other characters, or even to really hear what the other actor said or see what the other actor was doing. It was on automatic pilot and the learnt patterns of performing is what we watched. The performing was a display of anticipated moments and perfunctory, unmotivated "method" secondary activities (head scratching etc) that suggested puppetry, automation (or complacency) rather than the "in the moment" challenge of Naturalism springing from the actual moment, in time, on stage.

Naturalism seems to be an out of fashion mode of expression in the theatre today, much sneered at and sometimes apologised for, and I guess I can understand that, as it is very difficult to do well, and, especially to sustain over a season, unless, you remain truly alert to the challenges of recapturing the original impulses of playing and the accurate engagement with each other, on stage, each performance. Naturalism is not for the contented or half hearted. It demands absolute concentration the whole of the time, every time. It is what Stanislavsky was on about in developing his technique: To maintain the appearance of spontaneity through a season of playing; what is happening in front of us, is happening for the first time; it looks like life. It is HARD to do. It costs. Technique and stamina need to be at the fore.

So, what once may have been impressive with these actors, is now, hugely not. It is the kind of writing and acting that gives Naturalism its reputation as melodramatic or worse boring. It does require real truths and trusted interconnection every time you play. It must have a sense of "life or death". The director needs to get back in there with the artists and soon.

This acting is full of noise, shouting, abandoned jumping about to music (Could those dances advance the story? Or is it just fun dancing?), gnashing of teeth and indulgent emotional moments essaying "real"tears. (Oh sure!!!) I could not help but recollect Shakespeare's Hamlet in his speech to the visiting players. ".....use all gently; for in the very torrent, tempest, and, as I may say, the whirlwind of passion, you must acquire and beget a temperance that may give it smoothness. O, it offends, me to the soul, to hear a robustious periwig-pated fellow tear a passion to tatters, to very rags, to split the ears of the groundlings..... pray you avoid it." "TEAR A PASSION TO TATTERS.... SPLIT THE EARS OF THE GROUNDLINGS." These characters, apparently, were having a catharsis in front of us but we were left out of that loop and were, instead, seemingly asked to admire the actors and their work and their story. The first priority for any storyteller is surely the journey of the writer for the audience and to make the story and catharsis of the characters all of ours? We come to the theatre, minimally, for a shared experience and hopefully a transformation - a positive one, something that has enhanced our lives.

This experience cost me almost $30 and some 70 or 80 minutes of my fleeting time. It was not worth the spending of either in these fraught financial times. My experience took me to a place of objective criticism and into a transformed state of gloom and frustration. (Not too positive, I'm afraid.) I wish I had been warned. Later in the year we will see another play by Mr Graham, ONE LONG NIGHT IN THE LAND OF NOD at the Old Fitzroy. I hope the title of this play is not a prescient to what we can look forward too. OLLIE AND THE MINATOUR could just as well have had this title as a sub-title.

Footnote: Reading some of the pre-publicity to this production, many people, it was reported were astonished that a man could have such insight into the world and psyche of women. Oh, really! Hedda, Nora were written by a man. (Ibsen). Blanche and Maggie were written by a man (Williams). Just to name two men. Or is it a shock to have a contemporary Australian male doing it? And I guess that if you need use of the Greek literary heritage of myth, which is an attractive devise, might I suggest that you read almost anything of Iben, or even Eugene O'Neill.
Posted by Pearly Productions at 8:40 PM

I always find this blog completely abuses shows I thoroughly enjoy - Ladybird and Ollie being the most recent two. Both those shows have had fantastic responses - I'm constantly speaking to people inside and outside our industry who adored both. Neither were perfect. Both should be understood for their strengths and challenges. I just find it frustrating seeing exciting works like these - that are having such an inspiring impact on their audiences - being ripped apart in abusive tirrades such as this.

I hope all the artists involved in the shows you attempt to rip to shreds know that the views you express are not the be-all and end-all. Far from it.

And I'm sure I'm not the first person to disagree with a reviewer in this way... I just needed to voice my frustration about the brutality of these essays you write, Kevin. I believe in respecting the work of artists, and suggesting that you wasted your precious $30 and 70 minutes is hugely offensive.