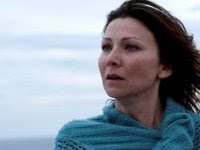 Photo: Beyond The Neck - Anita Hegh

B SHARP and BAMBINA BORRACHA productions present BEYOND THE NECK by Tom Holloway at the Belvoir St Downstairs Theatre.

Last year the Griffin presented Tom Holloway’s DON’T SAY THE WORDS and I believed that this was a very exciting new writer for the Australian audience. This play BEYOND THE NECK confirms that impression. Mr Holloway is a Tasmanian and was 17 when the terrible shootings by Martin Bryant at Port Arthur happened. Ten years after the event in September, 2007 this play was presented in both Hobart and Launceston to great acclaim. The community trauma runs deep and this play was a very important event. The fact that the power of the subject matter and the trauma of the incident, even on my unconscious suppression, rose to the surface, in my experience of this play, last Thursday, in the small Downstairs space, emphasises its universal resonances. This play is for all of us.

It tells of four people who, ten years after the incident, find themselves on a tour of the Port Arthur Tourist site. Memories and grief and fantasies are triggered and the disparate individuals find themselves, as do we, united in a strength of confrontation and consoling. Tom Holloway in the play script talks of the writing of the piece. Initially reading verbatim plays and having interviewed many, many people, he felt that that form did not have the required room for “journeys and drama.” So he devised a piece of theatre that “…is perhaps closer to a musical quartet than to a straight play. It is a piece where rhythm and timbre play vital roles, perhaps equally as important as characterisation and narrative structure.” He goes on to say; “The actors in this play have two main functions. The first is to voice the story of each of their characters and the second is to work as a broken chorus in support of each other’s journey.”

Under the Direction of Iain Sinclair, the four actors are terrifically focused and attuned to each other, and he delicately, with the use of his music composer, makes the piece, a quintet. Anita Hegh is controlled and brimming with the pressure of withheld grief. Still, highly traumatised 3: A Woman, is full of generosity, warmth and compassion for others while tough on herself. It is a performance of mature strength. Anna Houston as 2: A Girl,17 years old, is marvellous in her shifts and struggles as a rebellious, difficult and emotionally desperate, bereft young woman, attempting to come to terms with the death of her father and the aftermath on her family relationships. It is a deeply tragic telling. Lex Marinos as 4: A Man, 75 years old, who was actually at the site on the day of the shootings, struggling to live a normal life after such a near miss and witnessing, is embracably pathetic in the character’s stoic journey in the play. A hero, of a kind. Much to be admired and comforted. Jamie Croft as 1: a boy, 7 years old, (not even born when the event occurred) is impressive with the abandon of a young kid, who is acting out a trauma of abandonment accidentally inflicted by his parents, and has resulted in the invention of an imaginary friend called (ominously) “Michael” that encourages him to kill a dog with his cricket bat, and on the tour of this day triggers a joke that causes, unwittingly, the wellspring of horror for the other characters in the play. Some more careful shaping of the ebullient energy of the actor to give the text clearer room to impact on the audience, and not just the generalised characterisation of the “young boy” would, I believe, enhance and clarify the production further.

The simple set design by Luke Ede of ten sandstone blocks in the black space is anchoring to the Port Arthur site and the lighting by Matt Cox supports the shifts of mood and spaces well. Steve Toulmin is the composer and plays his piano score live, moody and supportive, it is an un-intrusive. He completes a quintet of instruments to explicate the play.

The performance I attended was moving, gentle and unsettling and yet oddly consoling as well. The form of the writing requires attention and results in an alert experience. This is theatre of a memorable kind. Difficult but human to its core.