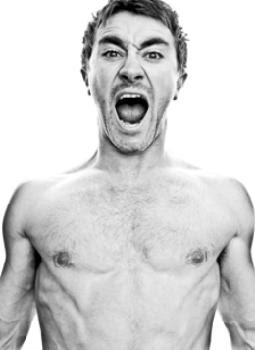 THE CALL by Patricia Cornelius, first produced by the Melbourne Workers Theatre and FULL TILT at the Fairfax Studio, Victorian Arts Centre, Melbourne in late 2007, concerns principally the story of four young people, uninspired by their education who are “disgorged” into a series of jobs in their local community, that are available and maybe, for some, soul destroying: in a battery hen farm (chicken pluckers); an mdf board factory; a meat rendering plant. In between earning a living the usual escapades of youth: of drugs, alcohol, fast driving, fast sex leading to pregnancy and marriage ensue .

The main characters are Gary (Josh McConville), Denise (Sarah Becker), Chunk (Chris Ryan), and Aldo (Hazem Shammas), all in their 20’s. Denise, at the beginning of the play begins with the dreams of escape with overseas adventures and becomes trapped in her place of origin with pregnancy, marriage and babies. The arc of her life in a spiral of depression and hopelessness. Chunk, a feckless youth who has the brains but not the courage to even contemplate escape, unhappy enough to not to challenge his “fate”. Aldo, caught in the boredom of life, becomes beguiled and trapped by the dependency on harder and harder drugs, ultimately “lost”. And finally, Gary, who moves through all of the horrors of his life environment “trap” with these companions but hears “a Call” that gives some rescuing shape or meaning to his life: the call of Islam and the Moslem faith.

Mid-way through the play: “GARY: I thought when I grew up everything would be a lot clearer, that it would make sense, all kind of come together. I’d know what I was doing, what was my purpose. Meaning. I wanted that. I felt sure, I was positive in fact, that when I became a man, I’d have that.” At the end of the play: “GARY: If I think of what I was like, of that man, Gary…… He knew…… He sensed there was something else. When he looked at the moon and it was full, when he touched something fine, when he heard a bird call. He sensed there was something more. I promised to be open to new adventures…… I opened my mind and soul to Islam. Allah will keep me safe…… I’m not ashamed of fighting for what I believe in…… To believe so completely in something that it’s worth dying for, that’s all a man could want for…”. This is the story of many young people, as the testimonies of some of the World Youth Day, last year in Sydney, realised before my astonished eyes - ( I too, in my youth embraced my faith, "Catholicism", in a similarly passionate and maybe naïve way). This particular story could be the story of a David Hicks, but not just he, and not just Islam. The Call is been searched for and the Trekkies or The Force be With You brigade or the Bikie Clubs are just as fanatical and embraced. As is much else. [Better education, maybe, is the key?]

Lee Lewis (the Director) has gathered together a team that is top class. All the elements in this production seem to serve the vision of the play. The writer suggests that the scenes move “quickly and unnaturally from space to space. The suggestion of space is a more satisfying conceit.” The Set and Costume designers Colleen Reeks & William Bobbie Stewart have solved the story telling demands elegantly and simply. The Set, a simple stepped central silver metalled block in a black walled and floored box. On the walls a set of gleaming metal meat hooks. Usually, I find the aesthetic vision of Ms Lewis’ Set Designs, with her artists, tend to dominate the play, but here, all is beautifully, aesthetically and theatrically attuned. It is exciting. All fits. The Lighting by Luiz Pampolha, adds both beauty and service to the story, unencumbered. The Costumes support the simplicity of the set and lighting design by being both amazingly practical and particular in conveying the setting and story. The tiny colour details perceptively skillful. The Sound score by Stefan Gregory is a highly successful and invigorating element to the production journey - most impressive.

All of the actors give a wonderful individual and ensemble shape to their tasks. The car ride sequence of the second scene captures and sets a tone of thrilling theatrics. The actors play many different characters as well as their principal roles. Sarah Becker creates a terrific arc for the “inspired” but ultimately, biologically trapped Denise. Her body language aided by astute costuming is particularly artful. Denise’s fearful prediction in the early scenes in the play: “…I’m going to shrivel up, I’m going to rot, I’m going to become a fat-arsed slob…” are manifested in the journey before our very eyes. (Perhaps, on the night I saw, a little too much over whelming emotion in the last scene with Gary, the clarity of the text momentarily blurred.) Hazem Shammas in all of his tasks is clear and switched on. The decline of Aldo demarcated accurately. Chris Ryan, who I have seen in three different roles this past year (THE HYPOCRITE, in Melbourne, and recently in CONCUSSION, for the GRIFFIN) adds another solid and sensitive performance, that is very subtle and “modest”, in a good way, to the production as Chunk. His story is also heart-breaking for its pathos. Josh McConville serves the leading role of Gary with all the imaginative flair and sensitive invention that it demands, and maybe more so. (Is this Gary just a little too deep, too intelligent for the character’s journey?) The baby - bundle scene is beautifully created and is a highlight of the performance, as is the very difficult speech of the "dream of the Silk Road" later in the play.

The momentum of Ms Lewis’s Direction is exhilarating. But, I felt the writing, somewhere about the meat-rendering plant sequence, seemed to lose its way. It felt to be a redundant scene. The play seemed to become becalmed. The journey of Gary had been clear until the laying out of the “small prayer mat” and the performance of the ritual of the Islamic prayer came as a surprise that I did not feel I had been sufficiently prepared for. I knew the plotting of the play, and had been, therefore, unconsciously conscious of where we were going but still found this part of the play construction puzzling and a little unsatisfactory. Ultimately the first fifty minutes of this seventy-five minute play were totally engrossing, the last section undermined by the writing. Still this was a very good night at the theatre.

Before the performance of THE CALL this night, we were given the opportunity to see and hear a short ten minute play, SPIN by Kamarra Bell-Wykes, one of the resident playwrights in development This is presumably connected to a combined writer’s project called THE FATES which is scheduled for the end of the year. Deborah Kennedy and Bruce Spence read, under the direction of Cristabel Sved, a very simple and charmingly sentimental narrative of a love affair and passing of time to death, with a washing machine as its metaphor.

By the bye: Just a moan. The program was scheduled for 7pm. It did not begin until 7.18pm. With the added bonus of SPIN, it meant a performance that was scheduled to finish at 8.15 did not conclude until 8.55pm. The need to forgo satisfactory food before the performance led to a late night hasty gobble after 9pm. (Scrambling from work.) I mention this because this is not the first time that this company has gone up late, once even, it cancelled, due to computer difficulties - at least I ate well that night, despite waiting till at least 7.30 to be told of the cancellation. As the company has moved it’s timing of performance forward, which I do not mind, at least have the respect and consideration to be prompt, as plans around this demand have been made. Let us into the auditorium before the start time, say five or ten minutes before seven, and things might be reasonable.
Posted by Pearly Productions at 4:16 PM

I enjoyed this production for similar reasons to you. It seemed a very skillful and powerful production of a play that hasn't quite been finished.

The conversion was a total blind side to me [not having read the play or anything about it] and I felt that there was so much to be explored about that part of the characters journey - both gary's lead up to the decision and the consequences for his relationships that had been constructed in such delicate, detailed beauty.

How could the playwright have shied away from this part of the journey?

Still found it a wonderful night in the theatre and a magnificent achievement from all concerned...I just felt there was further for this touching play to go.