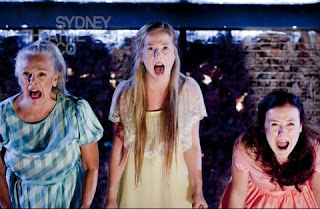 This play is, according to Mr Miller in his many interviews, the most performed of his plays. Published and first performed in 1953, during the height of the McCarthy House Un-American Activities Committee (HUAC), set in 1692 in Salem, Massachusetts, it still burns with relevance in 2009. When the Deputy-Governor, Danforth in the third act of the play speaking to one of his examinees, Francis Nurse, (in this production, Giles Corey, played by Peter Carroll) says, "But you must understand, sir, that a person is either with this court or he must be counted against it, there be no road between. This is a sharp time, now, a precise time - we live no longer in the dusky afternoon when evil mixed itself with good and befuddled the world. Now, by God's grace, the shining sun is up, and them that fear not light will surely praise it. I hope you will be one of those." The hackles of disturbed memory of very recent history stand up.

This is a production from the education wing of the STC. Some twenty one roles have been re-distributed for a cast of ten. There is much fodder for discussion for the students (and other audience). Does this play have contemporary relevance? If so, does the abstracted setting (Simone Romaniuk) of a contemporary looking wall, made up of seemingly caged squares of paper (reminding me very much of some of the contemporary art installations of Claire Healey and Sean Cordeiro - although they use found objects) behind a raised red carpeted geometrical floor, work? What does it do to support or clarify the play? Does the contemporary costuming, similarly, support, clarify or obfuscate access to the meaning of the play? Could it still have had impact in the period it was set in, the Puritan world of Salem in 1692? Does the setting of the play in a hybrid religious world, using Australian accents, and thereby locating it in a contemporary and local world of a kind of extreme fanaticism help the understanding of the play? Do you think it is overstated? Do you think it is a distraction? Do the choices of design and location suggest an insecurity about the strength of the play? Is the distancing effect, used by Mr Miller in 1953, by setting it in a past time, 1692, in the stage directions of his text no longer a valid choice? Compare and discuss the recent design choices of the film of THE CRUCIBLE with Joan Allen and Daniel Day-Lewis.

The Director, Tanya Goldberg, guides her mightily taxed cast through the sense of the play with some admirable clarity. The might of the writing is a great support. Marta Dusseldorp (Elizabeth Proctor) and Joe Manning (John Proctor) after an insecure opening to the second act, where a supposedly wintry household, is undermined by the glowing colours of costume and lighting, build with the mastery of Mr Miller to a suitably compelling last act.

For me, the best work came from Peter Carroll as an irascible member of the village, shocked into fear when his accusations have such terrible consequences. There is a grasp for the mordant humour by Mr Carroll that leavens the performance of the play with a variety of response. (The possibility of ironic comedy.) The focused energy of the textual usage by Angus King (Reverend Parris) kicks the first act into a desperate and hysterical urgency that grabs one's attention and holds it there despite some of the melodramatic choices of other members of the cast.

The most remarkable acting comes from Lynette Curran who in the space of twenty minutes, due to the multiple casting demands of the production, appears as Tituba, Mercy Lewis and Rebecca Nurse in act one. Each one of these creations is accurate in a very refined discipline. Vocally the clarity of intention unequivocable. The audacity of having Ms Curran play a black servant form Barbados, to be followed by the impersonation of a very young teenage girl "bewitched" by the power of sudden recognition of stature is fully sustained by her in a breathtaking speed of only minutes. The creation of Rebecca Nurse that rapidly follows, is such that whenever she appears and speaks, attention must be paid by the audience - there is no escaping her urgent demands of you. The respect for Rebecca's wisdom in the first act, the empathy that she wrung from me in the final tragic act, when with four short speeches she elucidates the dignity and power of goodness as exemplified by Arthur Miller's writing, is truly worth savouring. She gives meaning and strength to the dilemma of the Proctors in the scene with her.

Two dogs and nineteen men and women were hanged for witchcraft in Salem in 1692. The consequences of the investigating committee led by Eugene McCarthy, in the 1940's-1950's, in the USA have not been fully explicated. (The Woody Allen film THE FRONT with Zero Mostel was my first conscience indication of the tragedies.) The contemporary ramifications of recent history are still swirling around us. THE CRUCIBLE is a great play that resonates, staggeringly, still. This production for schools is a very useful tool for education debate. It is an admirable experience for any theatre going attendee, as well.

Dear Kevin,
Long time reader, first time poster. This review of the crucible doesnt seem to mention anything about the younger cast members except for the passing comment on overwrought theatricals. I ask this because I note that some of the young cast members are NIDA graduates. Are you avoiding further comment because of a conflict of interest? Could we have some insight into what you thought of the younger performers. Cheers

Thanks for the note. It isn't always interesting to talk about every contributor in detail, let alone possible. I enjoyed the performance of all the company, who I felt within the limitations of the production, money and probably time, very, very creditable. Certainly the performance I saw was "admirable" enough to recommmend to all audiences, not just the school - education audiences. The play is very well served. What was your response? Any details?