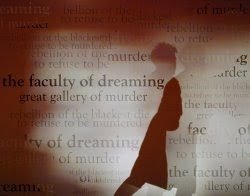 On Friday night venturing into the Carriageworks enclave was a very daunting but thriving experience. The huge foyer of the Carriage works was abuzz with an indoor evening market. On top of that, all the possible performing spaces were in use, including the foyer: a series of local “popular music” performers. It was both disconcerting to have to deal with the excited crowds and yet happifying to be in the Carriageworks space so alive. Wending one’s way, to be on time, to the space of your designated performance was quite an effort. De Quincey Co presented GHOST QUARTERS – The first dream of the Opium Confessions. It is a solo performance work by Tess de Quincey based around impressions from the works of Thomas De Quincey (1785-1859). The most famous of these: CONFESSIONS OF AN ENGLISH LOTUS – EATER, form a spring board for a collaborative "enquiry into the writings" of De Quincey, which cover quite an extensive range of interests and forms. In an interview in The Australian newspaper Ms De Quincey speculates about the possible heritage of origin between herself and the writer.(There is a very occupying photo installation by Mayu Kanamori, in the foyer of the space, where the image of Thomas is gradually translated into the image of Tess de Quincey, and back.) Joan Goodall, a writer of psychological thrillers, and critical works about theatre (including STAGE PRESENCE (2008) which has been shortlisted for Theatre Book Award in London.) has acted as Writer and Dramaturg on the project. A text covering Thomas de Quincey’s young sojourn in the Welsh and English country side and later his living in a sympathetic friend’s (Brunell) London residence in Soho with a single wretched servant girl, who was fearful of ghosts in one of the rooms of the residence; plus excursions into his opium taking (originally for pain relief) and onto touching some of other writings such as his essay MURDER CONSIDERED AS ONE OF THE FINE ARTS (1827), has been scripted and then prepared in an inventive stream of consciousness recorded by the Sound Designer Ian Stevenson with overlapped (and other sophisticated techniques) to form an aural background to the journey of the piece. Knowledge of Thomas De Quincey (or a quick reading of the program notes are useful to have for relatively easy comprehension of the experience.)

The room has the audience seated on chairs around the perimeter of the space. Eight translucent long oblong swathes of gauze hang from the roof, on which images (Sam James), of trees, country side, later urban interiors, chandeliers etc, are projected onto and through the cloth onto the walls behind. The lighting (Travis Hodgson) is suitably atmospheric and careful to take care of the projected images for our delectation.

I was fortunate to sit in the space around the wall where I could observe the dance of Ms de Quincey in detail. Others less felicitously sat may not have had the same fascinating experience as I. The dance technique that the De Quincey Co have been exploring for the past “several decades… is based in BODY WEATHER which is a contemporary dance training founded in Japan by butoh dancer Min Tanaka, melding Asian and Western practices and thought.” I have attended several different works by the company over the last years. It is, then, truly fascinating to be able to observe the leading mentor and artist of this work “style” in a solo performance, so as to closely and undistractingly be able to see the Mistress (Master) explicating an ideal of the form. It has been interesting to watch the Company at work with the disciples but it is always valuable, and was in this instance, to see the originating force in display of the technique. I was, personally, engrossed in the performance. More for the opportunity of watching the unadulterated commitment and original "movement language" that Ms de Quincey has evolved than in the piece itself. In a highly stylised movement-dance technique of very slow evolving whole body gesture and movement, the figure of the “hero” of the piece, accompanied by the sound track and scape, moves through a journey of vividly committed intent. The images are projected and relieved on the body as well as it moves through the space on its journey. The face lit by a hand held light also emphasises a possession or type of madness. Perplexing and yet absorbing.

The combination of the other collaborators seems to be harmonious in its intentions for GHOST QUARTERS and yet it is all not yet completely comprehensible in one sitting. However, provoking enough, to urge me to hunt out some of the writings of Thomas De Quincey. In the program it suggests that this work “forms a part of THE OPIUM CONFESSIONS, (which) is an overreaching enquiry into the writings of Thomas De Quincey.” I look forward to seeing the other episodes to continue the curious investigation of what Thomas calls “a brilliant year of water… set as it were, and insulated, in the gloomy umbrage of opium.”

N.B. : Quotations are from the program notes and Selections From De Quincey, edited by A.H.R. BALL. Ginn and Company Ltd. (1932)
Posted by Pearly Productions at 10:27 PM