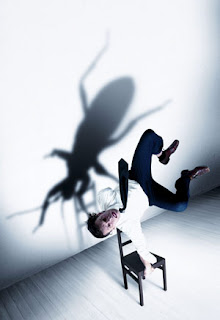 Franz Kafka wrote this short story in 1912. He was 29. He was dead at the age of 40. This work along with The TRIAL and maybe THE CASTLE have had a fascination for intellectuals, so much so that there is a word: Kafkaesque in the English dictionary – “( of a situation, atmosphere etc) impenetrably oppressive, nightmarish, in a manner characteristic of the fictional world of Franz Kafka.” This version of the story concerns a bourgeois family of four. A father (Ingvar E Sigurdsson), a mother (Edda Arnljotsdottir), a son (Bjorn Thors) and a daughter (Unnur Osp Stefansdottir.) {There are also two outsiders that cause alarm when visiting the family, played by Jonathan McGuinness.} The son finds himself to be different, and so marginalised in his contemplation of the world that he sees himself as a minority. An inferiority complex has developed and when we meet him he has begun a metamorphosis into an insect in the attic bedroom of his home. His family is puzzled and shocked. Only the daughter has any level of compassion but even she becomes worn out by the demands and presence of her strange creature brother. The conventions and expectations of the middleclass that the family feels necessary to maintain, causes them to deflect and ultimately reject the son in the attic that is so different. Casual neglect and then persecution and ultimately the sacrifice of the brother is the only way for the family to survive in the “real world”. They leave him and they escape to a landscape of idealistic flowering while the son dies in the isolation of his self, and the family’s making. Something hideous to eschew if one wishes to progress happily.

Kafka, autobiographically, experienced these feelings intensely as an individual. Spiritually and especially physically, so the biographers tell us. All of us who have felt to be the other, the unique, the different, the marginalised, identify with the sense that the world of conventional behaviour looks at us as if we were of another species. Their will and judgement changes us, marginalises us so that they can survive without concern. We become, like in Kafka’s story, an insect, easily, without conscience, expendable. In 1912 this was a relatively hidden truth. Now in 2009 it is an accepted fact. Recent history rife with examples of the most numerous kind. Of the most stupendous cataclysm to whole sections of our human brothers and sisters.

So, in 2009 this subject matter and story is not anything new. It is a reminder but it is not a revelation. The horror of it has been experienced first hand, often, recently, in both history and in the fictions of the many modes of storytelling of our civilization. The most sensational memory of this story was in the telling of it by Steven Berkoff and his company a few years back. This new adaptation by David Farr and Gisli Orn Gardarsson, according to the program notes, comes at it in an investigation that from Mr Farr, is intellectual, and from Mr Gardarsson one that is physical. Both of them working in tandem as the Directors.

We have a Set design (Borkur Jonsson) of two levels. Downstairs is a depressingly accurate evocation of a well used middle class home. A dining room slightly decrepit but well lived in. Naturalism of the highest order. Connecting to an upper level is a realistic staircase that opens up into a room that is skewed visually so that the bedroom floor, with the bed attached, is on the horizontal plane-wall. We see the bed suspended and Gregor Samsa on it, facing us. The design surprise is a delight and it holds our concentration fully. Later, another world reveals itself as the back wall disappears and a weird garden of odd attraction harbours the surviving family. It is eerie and not altogether comforting.

The very conventional text adaptation by Mr Farr is delivered in a fairly unconventional, intense set of stylised choices. The vocal work has a cartoon, exaggerated form of delivery, with loud enunciations and slightly intoned (sung) effects. This is all accompanied by a very robust physical life by all the actors. Highly energised and contained-dance like in its concentration and explication. There is a formal physical vocabulary that we learn and come to anticipate and appreciate. The naturalism of the set is counter-pointed by the peculiarity of the vocal and physical life of the production. The physical demands of Mr Thors as Gregor are fairly athletic and breathtaking in their demands – a range of skills that demand much strength and controlled subtlety. The stylisation is at first highly attractive but in a 90 minute, no interval performance they do not develop or gather complexity. The affect reaches a plateau of familiarity and the dramatic and even curiosity attention wanes and becomes becalmed. The story telling lacks accumulative tension and dramatically stays trapped within the playing choices of the production. It becomes oddly distancing. As the story is not new and the characters relatively static in their emotional development there is little to experience but an objective appreciation of the skills of the actors.

There was much to watch but the cumulative experience was one of admiration rather than exhilaration.
Posted by Pearly Productions at 3:20 AM