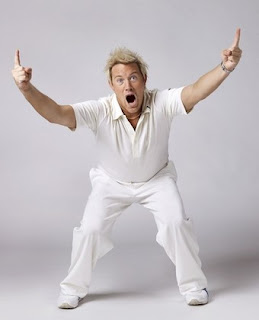 Conception for this Musical began, says Eddie Perfect in his program introduction, in 2006. How time has moved and shaken the “world”. In Sydney, after the recent, persistent NRL scandals, the swimming court cases and much else in many sports, even the Olympics, the hero worshipping of our sporting stars is a little, maybe, politically incorrect. In May, 2009, a musical celebration of the life of Shane Warne might be a little bit “icky”. Well, this was what my companion and I laughed about as we sipped our drinks in the foyer in anticipation. We wondered what sort of spin Mr Perfect might put on it all. Of course, we were there not because of Shane Warne but because we were fans of Eddie Perfect. Both of us having hilarious and affronted and confronting memories of THE BIG CON and DRINK PEPSI BITCH. We were abuzz.

The first shock was to discover how conventional the work was in all of the usual constructions of the bio-musical. We expected something else from the iconoclast Mr Perfect. Straight down the pitch of tradition, Along the lines of… "Hi mum.... I played AFL.... I was unmotivated.... I love junk food.... Thanks mum..... AIS here I come (It’s a bit regimented (Nazi!) here and maybe just a little bit gay etc).... etc.... to, Hi girlfriend... Will you be my wife?... La, laa, la, la!!..... MUCH LATER.... Mum, What have you given me? I’m in trouble again...... I know I’m vain..... I am a text addict..... divorce... lament.... etc , etc.” Despite the familiarity of the structure, it is the acerbic wit of the lyrics of the songs that kick in and keep you on side. And despite the funk of my deep chest infection, I was moved to laughter a great deal, (causing painful coughing- much to the alarm of people to my left and in front and in the back of me (Swine Flu?!!), once, our ears had adjusted to the difficult sound mixing in the space. The clarity of the lyrics was a wee bit of a problem some times- a pity as this is why we were there, the astonishing and audaciously inappropriateness of Mr Perfects wicked, wicker word smithing.

There is much to celebrate here, if not the life of Shane Warne. How could you not want to celebrate Eddie Perfect? Firstly he has written this piece, both writer and composer. This is an achievement of some merit... a really entertaining Australian Musical. Not often do we get to see one of these at such full bore. Then there is Eddie Perfect the performer. There were times that Mr Perfect seemed to be giving 150% and sustaining that energy output with impeccable control for long stretches of consecutive time. This performer seemed to be volting himself into a place of great personal risk to give us a jolting and exhilarating experience. Last week, in my diary chat about Ashkenazy conducting some Russian composers, I talked about the necessity for any great performance to have an ownership of the work/character-- a powerful need of personalisation – identification; to draw upon own truths to utilise in the imaginative steps to creating character and telling the truth moment to moment. I don’t know how near the character traits of the performer, Mr Perfect, is to Mr Warne, but the passionate commitment that is on stage is startlingly overwhelming. One is swept away with a tsunami of belief and wonder. There is no way that you can ignore that “gift” that he gives one.

Then, there is an entire ensemble, including the musicians which, on Sunday, gave ,it seemed to us, all of their souls. Is Mike McLeish a star of the first order, in musical theatre? I’d have to say yes. And yes again. Based on the KEATING performance and now this work YES, YES, YES!!!!!! Then what of Jolyon James with that incredible voice and the dynamic performance of Indian John in the My Name is John number? – a star. Both Sally Bourne and Rosemarie Harris give great emotional dynamics to their roles. This is a team of performers who gave their collective all on Sunday, worth every cent we paid, even if you liked nothing else. My companion and I were chuffed and faced the world after the show with smiles and an exhilarated optimism.

We didn’t like the set much. The costumes were, maybe, necessarily (all of those quick changes), a little too pragmatic and not “glamorous” enough for a musical, we thought.... but ultimately, we felt, it didn’t matter. The lighting (Damien Cooper) was “event lighting” and good. The Choreography was often funny/clever, especially the AIS song stuff; sometimes a little scrappy. The strong hand of Neil Armfield in shaping, pacing and staging the piece was evident and, as usual, of a whole. Whatever he touches, at the moment, there is great artistic integrity, subtly woven into the package. Whether the package be Opera, play, film or a musical!!!! He is worth celebrating.

I understand the show has cut short it’s run in Sydney. It may be the political correctness hoodoo haunting the inappropriateness of celebrating sports heroes that is preventing people from buying tickets, but, my companion and I felt that this was worth seeing. The celebration of Australian Musical Theatre talent and the nurturing of this very difficult genre is worth every cent, here, at a very difficult venue, for this work. There are performances here that you will bench mark as references of quality of the genre and enough wit to keep you occupied if you remain attentive.

We were glad we went, we decided, in our taxi, home. We have encouraged others to get along there before it is too late - even our taxi driver, who was Indian and loved cricket. (We know he will love musicals as well... well he loves Bollywood he told us.)