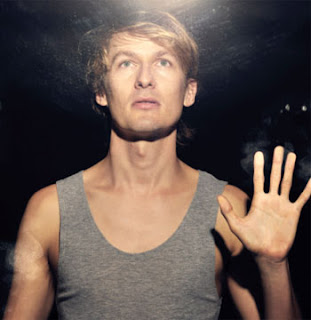 Photo - The Duel - Luke Mullins
SYDNEY THEATRE COMPANY AND THINICE PRESENT; THE DUEL, from The Brothers Karamazov by Fyodor Dostoevsky adapted by Tom Wright as part of Next Stage at Wharf 2.

The most interesting and absorbing aspect of this experience was the story telling of Dostoevsky as adapted by Tom Wright. Mid way through the performance I found myself leaning forward and being absorbed by the journey of the text. Otherwise the work was generally disappointing.

Matthew Lutton made a strong impression on me with his work on the Tom Holloway play: DON’T SAY THE WORDS, last year at the Griffin Stables. This production did not fulfill my expectations. The design by Claude Marcos, both Set and Costume were, as Mr Lutton explains, within “a contemporary landscape” for an “abundance of reasons”. However the dirty off white rectangular box with it’s stained white carpet and ‘cheap-jack’ furniture with no exit, with, in this design, a rectangular centre window and blind seemed so familiar from other recent concepts on Sydney stages that it served as an irritation rather than as a support for this particular play. The contemporary poor street clothing design also followed recent trends and lacked impact or usefulness for me. The fluorescent lighting (Damien Cooper) with a colour fault that blinked on and off at moments during the event was also too familiar to have any original statement. The sound design of a mix of music from a wide range of artists, including Donna Summer ( a favourite track!), seemed to follow a pattern of ‘ironic’ usage that was fun but tried before and now tired. (Why the charade of selecting CD’s and putting them into a machine on stage and seemingly to control them from there was continued, when clearly the stage management was in control even to cueing the track entrance and having it broadcast through the theatre speakers was a production detail that continued to baffle me. Was there an existential meaning? Or was it just not thought through?) The cliché feeling of all these “contemporary” elements were rather a distraction than an original take on the play as far as my experience was concerned. (Maybe a “period” look would have been shockingly right? So unexpected!!)

When we entered the theatre the four actors Brian Lipson, Renee McIntosh, Luke Mullins and David Lee Smyth sat or stood around the set in conscious audience mode. Ms McIntosh and Mr Smyth had little to do during the performance other than to fill in as minor characters or narrators voices. The “ambiguity” of their “metaphorical” presence was not transcended by the functional aspects of their responsibilities. The principal responsibilities were carried by Mr Lipson as the Mysterious Visitor and Mr Mullins as Zosima. The performance that Mr Lutton had elicited from Mr Mullins, an actor I have usually admired, was one that had an air of sanctity or sanctimoniousness or intellectual preciousness. It gave off a remote air of holiness and removed it to an “ivory tower” height that seemed to push us away from identifying with the humanness of the journey of the character. While, on the other hand, the wily reading of the Mysterious Visitor by Mr Lipson had all the right shadings of mystery, cheek and awesome wonder. His task was enthralling.

The text was thrilling and Tom Wright has at last found, through invitation of Mr Lutton, a story that at last as a hopeful view of the human spirit. More of it, please.
Posted by Pearly Productions at 2:50 PM