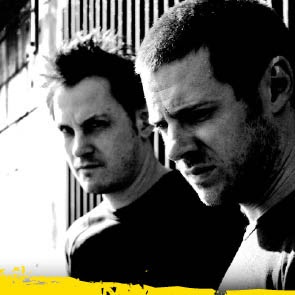 Shaman Productions in association with the Tamarama Rock Surfers present NO MAN’S ISLAND by Ross Mueller at the Old Fitzroy Theatre.

“Two men, trapped in a prison cell as the world goes mad outside. What is there crime? What will it take to set them free?” So goes the promotional material for this play. NO MAN’S ISLAND is an early play by Ross Mueller. CONCUSSION was seen at the Stables/STC Season earlier this year and the developmental growth of the writer is well demarcated when they are compared. This is a mildly interesting work which has promising glimpses of a playwright in the journey-man of his craft.

Set in a prison, simply designed in a narrow swathe of green paint, with two decidedly awful beds, surrounded by strings of barbed wire (Eugyeene Teh), lit schematically by Katie Sfetkidis and supported by a very dense sound track by Steve Toulmin, two prisoners (Andrew Bibby and Simon Bossell find themselves in enforced contact. Who they are, where they are, when is it, what they want and why they want it (five of the six Stanislavsky questions) are relatively unimportant. Stuck on a no man’s land (a prison cell), through conversation, they discover that no man is an island, and rescue and humanity is found through the interdependence, discovered of “getting to know you”. These two men find strength and identity through verbal bonding. An enormous journey is made by the two characters. And although still in prison, at the end, they have found a freedom, amongst themselves. The directing (Travis Green) lacks the vigour of proper stakes in the early part of the play and the two actors, on a cold night to a small audience, seemed to warm up during the performance, but finally found a simpatico of collusion as the play moved on into clearer revelations. Andrew Bibby, particularly strong in the later scenes.

This is an interesting piece of work, principally to see the talent of the writer emerging, and the honest and committed work of the actors.