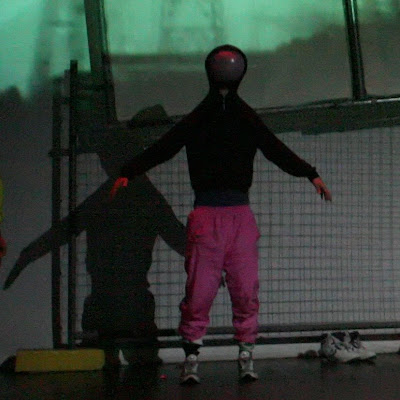 THE RIOT ACT has been developed through residencies at Campbelltown Arts Centre 2007-09 and Blacktown Arts Centre 2007. This work was inspired by the media headlines that followed three highly publicised riots in New South Wales (the Redfern Riots in 2002, the Macquarie Fields riots in 2004 [and even more recently again], and the Bidwill riots in 1983.) For the writer and director of this production, Karen Therese, it is the seminal experience of being 9 years old and living in a street “up the road” from what a reporter on 60 minutes was declaring “the worst street in Sydney” that has formed and informed the foundation of this work. In the program note Ms Therese says “growing up in Bidwill in Sydney’s west, shaped who I am as a person and deeply informs my art Practice.” This is evident, abundantly, in the high quality of what she and her team and supporters have achieved in this work. It has the feeling and, for me, the experience of a deeply insightful and “grass rooted” exploration of the realities of the worlds from which these “riots” may have risen. Although different, (certainly budget wise) it reminds me of the impact that HONOUR BOUND had. Both are contemporary agit-prop pieces and both use contemporary theatre practice, i.e. multi-discipline and multi-media, to achieve their objectives, but, for me, the veracity of the life experiences of the creators and particularly the performers make this work a superior and more affective instrument.

The piece has been devised and written over along gestation period (please note my observation and pleas in my WHEN THE RAIN STOPS FALLING by the Brink Company) with exploration with the artists involved and interactive programs in some of the schools of the concerned communities. Led by the writer and director Karen Therese, with dramaturgy by Chris Mead, (Could you have a better pedigree for this work? NB he is the director of last year’s best production and play, for my money, THE MODERN INTERNATIONAL DEAD), Multi media design that is Video by Scott Otto Anderson (HONOUR BOUND), that is of great, of both, realistic and poetic impulse and impact. Some of it breathtaking in its aptness and heartrending in its placement in the work. Sound design by Gail Priest/James Brown, overwhelming and yet subtle, too, in its intricacies to the gathering drama and observations of the world of the work. The Design of both Set, set pieces (props) and costume by Mirabelle Wouters and co-designer Lara Thoms are seamless in the veracity that they bring to the work both as a realistic and poetic solution to the demands of the work. The lighting too, Paul Osborne (in what appears to be a very difficult space) both spare and atmospheric. The final, behind the scenes, collaborator, Kathy Coghill, as Movement director, has, with the director, created some outstanding and masterful images that were both searing and beautiful to witness.

Finally, the Performers/ Co-devisors: Matthew Day, Matt Prest, Georgie Read, Leo Tanoi, Latai Taumoepeau have embedded in their performance such a deep, integral understanding and empathy to the world that they are creating, that the truthful enactment of the figures in the landscapes of the series of episodes in the work are both devastatingly “real” and yet, also, subsume into poetic imagery of “accidental” creativity of great beauty and yet didactic punch. There does not appear to be any of the condescending nativity of the “actors” in creating these figures, that I have found so objectionable in some of the recent mainstream work when dealing with the “under-classes”.

On entering the space, we cross a soft floor of cardboard packaging, soft and giving underfoot. A sensual interactive experience that the world I am about to see is not one that I would know. It does not have the necessary certainty of my own grounded life. It is slightly unsettling. One could feel apprehensive. Once seated in a steeply raked auditorium, the setting is sparse – an off white back wall and black side wall. The furniture is plastic any factory “spat-out”- sturdy but cheap and probably of a very limited life span, also spare. The actors entered in uniform or “corporate” clothing. They represent “government” – concerned bodies of authority. Media is present. There follows a brief interlude where, projected on the back wall are research reports about the causes of riots in these districts – charts, percentages, numberless lists. The characters begin to give verbal accounts of the statistical facts and conclusions which, satirically, are never completed as these bureaucrats are constantly drawn away from finishing any speech by the chaos of modern technology, especially the mobile-phone, which constantly creates a hurly burly of business that does not seem to have reason to exist except it’s own pre-occupied sense of importance and activity. Quickly the bureaucrats disappear and we are taken to the location of the “RIOTS”. Media is present. We only ever see the “Authority’’ figures again , through the symbolism of a helicopter rotor sound, pounding down upon us while a spotlight roams the grounds beneath them in an attempt to menace the riots to a standstill. (There is also a talk about the introduction and effectiveness of Taser guns for the police.) Media is present. Authority then is seen as presenting a commissioned report (never fully finished) and then only quelling an outbreak at the crisis of its expression.

After the bureaucracy disappears we are presented several episodes of the observations of these communities. We see people unoccupied. Unemployment, education, as the statistics we were shown, is endemic. We see the boredom: directionless lives of these people who begin in "junk" consumption move into trifling activities that gradually escalate into irritations and then grow in intensity to aggressions and violence, finally erupting into contagious nationless explosions of essentially self harm and property damage. The “helicopter” ominously quells the situation. Authority does not appear in any other way. Then, we begin the cycle of behaviour again with different permutations. Then, it repeats, repeats. This is striking political theatre. But what is also arresting is the aesthetic imagery that the collaborative team have struck in these interludes without apparent “pointing”. Time and time again it is the witnessing of “tableaux- vivants” or installation images of great poignancy that sometimes, fleetingly, and at others, fixedly, sit in the landscape of boredom and distress, that grabs one by the vitals of your humanity and bring you to a place of consciousness and maybe outrage. This work is mostly movement and image based. This hybrid form of performance is very important and exciting. (In fact it is the text based communication that is the least confident in the production and slightly distracting. I had some issue with the final five minutes where the “figures” in the landscape come to a microphone. I felt the texts were aspirationally sentimental and undermined the tone of the piece. I understand, for others, however, it is a cathartic need.) The form of the work permits a universality that reverberates away from the particular to a big picture without a dependency on language.

With all the statistical evidence that the production begins with, what is been done, actually, to save a generation of our tribal brothers and sisters from continuing on this hopeless spiral of despair? If nothing is really done, then, beware what we have wrought. (Surely this is the power of the film SAMSON AND DELILAH, as well?) The dignity of work is essential. "People find identity through work", to quote a contemporary British playwright, Richard Bean, much concerned with this aspect of life, “ their work gives them more than money and a job.”

The fact that Government has created this regional city Gallery, (which is beautiful and also extremely active both artistically and socially, the present exhibition of some of its collection is impressive) is a move in the right direction. But only a beginning. It was interesting to sit beside groups of the community from which this enterprise has come. To see them exit with all the rough chaos of their life environment into the court yard of the venue and stand and react. What they thought, what they gained or lost, I will never know. Maybe nothing, and yet, I know from personal experience, that maybe one of them will have had a germ of vision of another way. This production and this Art Institution has held out a non-judgemental and observational hand. Congratulations.

This work will also perform in early July at Blacktown Arts Centre 2, 3, 4 July. I recommend you attempt to see it. Certainly the Sydney Theatre Company or the Opera House Developmental Wing should see the work and bring it to the attention of the population that only ever see the media eye view of this world. To see this performance, I travelled by train through Redfern, Macquarie Fields and Glenfield. All sites of these “RIOTS”. All within an hour of my own residence. It could have being, for all I have ever really known, on another planet. Shame.

A quote from ‘Notes on writing and the nation’. S Rushdie, from STEP ACROSS THIS LINE: “great writing makes a noise in the mind, the heart.” Mr Rushdie goes on to warn us to beware of the writer that speaks on behalf of etc… “The New Behalfism demands uplift, accentuates the positive, offers stirring moral instruction. It abhors the tragic sense of life. Seeing literature as inescapably political, it substitutes political values for literary values. It is the murderer of thought. Beware!..... In the best writing… a map of nation will also turn out to be a map of the world…… Good writing assumes a frontierless nation. Writers who serve frontiers have become border guards.” This work exemplifies some of the ideals of Mr Rushdie and I hope our audiences and funding bodies, concur.