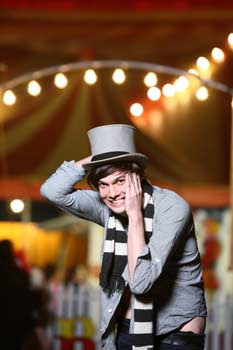 Presented last year as part of the B Sharp Season Downstairs this play has had some re-working, new writing and some re-casting. Wayne Blair’s production has got deeper, darker and more pertinent.

Alcoholism and addiction is the thematic subject. In my own neighbourhoods of suburban Sydney and the inner city, the cultural trauma of alcohol abuse, (binge drinking, just one of the symptoms) is almost unavoidable. The consequences both individually and in the wider community are ugly and on the edge of catastrophic.

Ruben Guthrie (Toby Schmitz), is an advertising "thinker" of some renown; the pressures of his work creative environment, his friends and their life styles and tragically the inheritance of family influence coupled with a guilt and fear of personal responsibility failure and a recent romantic relationship breakup, leads him to face his "demons" and seek help in an alcohol recovery program. The play charts the struggles that he has in maintaining his will and capacity to sustain the "battle" to sober equilibrium. It is a difficult and dangerous journey. The cultural demands of Guthrie’s world: personal, family, friends, societal and work are all geared to encourage and prolong his illness without regard for his personal well being.

Brendan Cowell talks frankly about is own "series of ugly BENDERS" and that he wrote the play after "a year of self-imposed sobriety". "Write what you know", is a pertinent influence in the greater body of this text. It is also, thankfully, leavened with wit. There are some wonderfully funny one liners that allow the play to be absorbed without an overwhelming sense of the “battle”, turning the night into a depressing evening in the theatre. It does have the feel of a contemporary “Williamson”: A pertinent contemporary issue balanced with some very accurate “Aussie” humour. Certainly the audience I saw it with were both confronted and entertained. In one moment, when Guthrie is teased into taking a mouthful of alcohol by his mother, there was a palpable wave of concern, and then, when Guthrie, after his mother’s exit, spat the wine out, there was a spontaneous round of applause from some in the audience. Clearly the audience was identifying and supporting the character’s journey. The comedy, well tuned, was a skilfully placed release for the audience – mostly recognising a real life experience that needs attention.

Wayne Blair, along with his designer, Jacob Nash, has simply expanded the original look from the Downstairs production last year. A polished wooden floor, with two vast black-bricked walls carrying shelved gleaming bottles of alcohol. It is magazine “glamorous” and very seductive. With only one piece of furniture the location changes are simply rung in with lighting (Luiz Pampolha) a few props and actor’s belief. The Sound composition and design (Steve Francis) is simple and atmospheric.

The production has expanded well into the bigger space and the acting from the company is uniformally strong. Toni Scanlon and Geoff Morrell adding considerable weight as the parents. The writing is still strongest in the monologual “riffs” that Ruben Guthrie has and Toby Schmitz is just as dynamically thrilling as he was last year with the challenge of the role and there is also a considerable deepening of the emotional “weather”. This is a remarkable feat of stamina and control. Along with the performance in TRAVESTIES earlier this season, Mr Schmitz, keeps fulfilling the promise of excitement for his audiences. Let us hope the challenges he is offered in the future challenge him as well.

I just came back from seeing Ruben.

Talking on the writing here.

I can't help but feel that many of the scenes were two-handed discussions about alcoholism, bookended with sporatic and brief exposition which somehow tried to give the piece a sense of story. Toby's performance was so fantastic that he turned who for the most part is a caricature, into a believable character. I felt the rest of the cast were competent, but that they almost descended into caricature, archetype. Again, I guess this all comes down to the writing.

To me it felt like a joke-ridden essay. The way in which the wafer-thin story turned was abrupt and not satisfying for me.

But what do I know? I enjoyed your review.