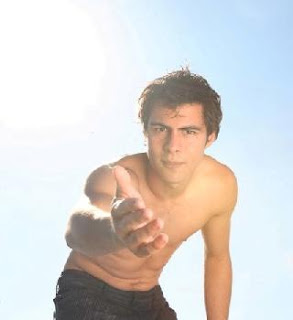 Savage River is set in a remote area on the west coast of Tasmania; “Hour–north from Zeehan. A ways south of Arthur River. Savage is two hours east..... (and west?) The Republic of South Africa.” Kingsley (Ian Bliss) , a deeply, psychologically, injured man, has fled with his half caste son, Tiger (Travis Cardona) to the wilderness, in an attempt to protect the boy from the prejudices of ‘civilization’. Tiger has been brought up a relatively protected ‘wild child’. Nature and its bountiful gifts are his principal knowledge. Television, The Three Stooges and mid-night movies and cooking shows creating a curiosity for the other world, through an old television set in the camp. Into this world is brought Jude (Peta Sergeant), by Kingsley. She, like him is an injured ‘soul’. The collision and the naive interactions of these fractured characters is the body of the play.

The play is, relievedly, straight forward - an old fashioned “melodrama”. There is no strain to follow the meaning of the play. No puzzle as to who these people are. It is a play that has clear form: two acts, made up of twelve scenes (with an interval – how old fashioned can you be?) with characters that have gentle psychological and narrative progress – building all the time.

The Director, Peter Evans has elicited a naturalistic production. Giving the actors the opportunity to breathe in the spaces between the lines and their situations. It is the acting choices that give a contemporary edge to the witnessing of the piece. Peta Sergeant is oddly uncomfortable to watch, as the pain of the character’s external and internal struggles register painfully, truthfully, across all of her instrument. The anguish and uncertainty of identity is contrasted with the bravado of action in the safety of alcoholic haze or in the ordinary doing of house making (Curtains etc). The tenderness towards the young Tiger and the flailing endeavours to deal with the dangerous Kingsley provide a range of intriguing responses for the audience. They flicker across her face and body like electric shocks. Travis Cardona as the ‘wild child’ held captive in this wilderness paradise treads a pathetic line between the glorious nature of the wisdom of nature in the child and the struggle for a fuller knowledge of the real world, to become a man: it could be the loss of an innocent or the liberating of a spirit- the ambiguity of my response to the character’s journey is challenging. After the confrontation with his father “I’m goin’. To see everythin’. I won’t be chained. I won’t be buried anymore.” And his assurance “I’ll be okay.” buffets with the romantic but maybe tragic image of Tiger standing on his swing above the river, his arms raised like a bird, squawking like a seabird, laughing, “free”. How free when he enters the environs of Zeehan and the bigger world, one wonders? Ian Bliss creates the neurotic and paranoidal danger of an injured man, the rages of frustration and threat of violence, balanced by a final effortful restraint of civilized behaviour. It is full of tension making experiences for the audience. The threat is ugly and the restraint is unexpected. All three characters like the Savage River of the title of the play, register the possibilities of the multi-faceted nature of man; savage and noble.

The Designer, Stephen Curtis, has created a redolently atmospheric bush hut on the black shale and pebbles of a river bank. The Sound design (Kelly Ryall) and especially the beautiful and hauntingly romantic composition, cinematic in dimension (Jed Kurzel), provide great support for the essentially old fashioned story telling .It gives dimension and depth to the experience. The lighting (Daniel Zika) is similarly romantic in it’s support.

It is wonderful to sit beside an audience that registered its pleasure and confidence about having had a shared experience that they had no equivocations about. There was a confident beaming in the faces of the exiting audience. They expressed a joy of the possibility of a world, that with all of it’s problems, still may have solutions that give substance to the simple virtues of hope and charity. Old fashioned but highly satisfying theatre. I recommend it.

Came across your review of Killer Joe when doing a search for Maeve Dermody and noticed the comment of her lacking the "theatrical energy" of the rest.

I've seen the play twice and each time it is the character of Dottie who has been the weakest of the cast. Once the role was played by Michelle Williams, the other actress I can't remember. However both were extremely pretty as is Dermody. I got the feeling that the role of Dottie was cast with looks in mind given the nudity. Did Dermody perform nude? Do you feel the casting was influenced by looks?

I saw [also twice] the production in the mid 90s that had Kate Mulvaney in the role. She didn't come across as lacking theatrical energy and was stunningly moving in the role. Her trusting vulnerability was a brilliantly manipulative mask.

Anon. I'd say yes her looks did have something to do with it. But that said Dermody isn't without talent. She was great in the film Blackwater but a camera isn't a stage.

It may have something to do with the writing of the role. In memory it is a young girl with some disabilities who although central to the story and very present, has not as much text to support the explication of the character. So, it requires a really powerful presence and inner monologal vitality to maintain centrality in the storytelling. This maybe what I meant by lacking theatrical energy: the technique to create and sustain a performance over the hours of the play without textual support, unlike the film technique of having to create and sustain piecemeal over the timing of the shoot which is not as demanding,or is, but, in an entirely different way.

It could be down to the youth and inexperience of the actresses. Michelle Williams was 18 in Killer Joe. Ten years later she delivered a stunning performance in Incendiary.

Maeve Dermody too must be in her early 20s and relatively inexperienced.

It could also be that Dottie is being contrasted with Sharla. Lori Petty was brilliant in that role delivering a performance that was variously nuanced but also in your face and pretty explicit. Tank Girl bare below the waist was not how I expected the play to open!

Back on Savage River...saw the production last night, and thought that the parts mafe the whole look better than it actually was.

The design was excellent, and the performances were equally strong.

However, I found the script tedious and obvious. I constantly felt well ahead of what was happening on stage, and there was nothing within the plot that surprised. The interval point wasn't helpful, without a driving point urging me to return for the second half to see what was going to happen next. Particularly, I couldn't tell that Kingsley had found the money in Jude's bag...the lock was not visibly obvious from where I sat, and the breaking of it offstage was thus mildly perplexing.

This may come down to the stage direction, which again felt fairly pedestrian. The Griffin is a difficult place to stage action, and I was constantly straining to see what was happening due to the angles. At one stage, I think that Tiger was cleaning abalone shells, but I could never be certain.

As a sum up then, I found the script held the production back. If you can be caught up in the story, and there is a story there, then I think the production will be enjoyable for you. However, without any twists to grab me, I felt that the piece was fairly dull, a bland exercies in storytelling.