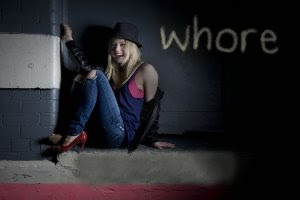 Arts Radar in association with B Sharp presents the world premiere of WHORE by Rick Viede, at Belvoir Downstairs.

WHORE is a play, in a set of numbered episodes, about two young people that decide that the world of the sex worker is a way to make money and be “interesting”. It covers a familiar trajectory of naive entry to the world and a series of initially benign adventures that gradually disintegrate to ugly confrontations. It charts a journey of friendship, comradeship between Sara (Rhiannon Owen) and Tim (Paul-William Mawhinney) as they get to know each other and the world they work in.

Certainly there is a deep psychological “authenticity” to the characters as observational types but hardly any real authenticity to sex workers and the sex workers’ world as it exists. The characters mention the Julia Roberts film PRETTY WOMAN and laugh that that world is only a movie. The world in this play does not have the feel of reality and is then, only a play, for me. It was the sanitation of the ease of success and the real lack of physical consequences from practicing in this world (where Tim accumulates 5o,ooo pounds in savings from his trade!!!) that did not permit me to enter the play. (I attended the performance with a companion concerned with the issues of this world on a daily basis and she found it mostly unrealistic.) Similarly, the thriller element lacked credibility or follow through and I longed to revisit the world of Brad Fraser’s UNIDENTIFIED HUMAN REMAINS AND THE TRUE NATURE OF LOVE of which WHORE felt derivative.

The writing has some sense of structure and some dialogue promise but the scenes meander and do not really move the experience forward excitingly. The production Design (Justin Nardella [set] and Jessie Giraud [Costume]) has initial interest but it stays a static image. Gloss black and silver grey, another repeated trend that is, on repetition, a bit under whelming in the theatre going experience in Sydney. The AV design is not very inventive and is hard to read - it is of not much impact except as titling to the scenes. The costumes lack gathering details. Sara’s shoes, for instance, stay the same despite her acquiring of wealth-scruffy and not in keeping with the textual development of the character’s success. (A Prada coat and those same old shoes?!!!) It is these details that continually undermine the authenticity of the production. It is all faintly under cared for in accurate detailing.

The acting, that also includes Keith Agius and Ben Mortley, is genuinely committed but not complex in its sub-textual development. Mr Mawhinney as Tim, is at first an interesting character to watch but having recently seen him give a reading to a disturbing character in DNA at the Old Fitzroy, the performance’s affects had similar expression. The inner life and it’s journey did not seem fully investigated. This was relatively true of Ms Owen’s work as well – developmentally, there did not seem to be an arc to the journey, clearly delineated. All the character’s experiences seemed to affect only externally, momentarily. Sara was hardly a different person at the end of the play as to what she appeared at the start: World weary but not changed. Her perception of the world still as empty and superficial. WHORE won the 2008 Griffin Award. It will travel to New York for a production at the Summer Play Festival.