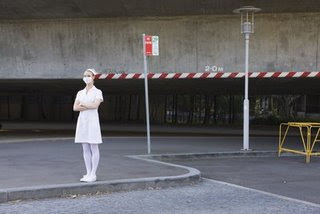 Sydney Theatre Company at Wharf 2 present THE CITY by Martin Crimp. Presented by arrangement with the English Stage Company at the Royal Court Theatre.

Maybe written as a companion piece to Mr Crimp’s play THE COUNTRY (2000), THE CITY (2008) concerns a young couple, Clair (Belinda McClory) and Christopher (Colin Moody) living in a city under the contemporary pressures of job insecurity, and the influence of a world full of war, torture and terrorism, of all kinds – close at hand and far away. It reveals a world of the fracturing social block of ‘marriage’ and the residual inheritance that the children are dealing with – unfinished ‘music’.

The play begins ordinarily enough with the husband asking the wife simply “How was your day?” Clair replies and takes us to amazing and disturbing incidents concerning a meeting with a stranger at Waterloo station called Mohammed who tells her of torture he has suffered and the abduction of his child by his sister-in law. Ordinary lives obtruded by the extraordinary. “How was your day?” In a following scene, a neighbour, Jenny (Anita Hegh), a nurse comes to ostensibly complain about the noise of the couple’s children, keeping her awake, an everyday problem possibility, but digresses into the harrowing telling of her husband’s experiences as a doctor in the army in a war zone in the drain pipes of another city. Later, again, we meet Christopher with a little girl (his daughter?) (Georgia Bowery), dressed in a nurse’s uniform identical to that of Jenny, the neighbour, who recites some very ‘blue’ limericks. (Where are the “Henson” police?). In the last scene we meet her again, again, identically dressed as Jenny, in a different outfit, including precipitous pink high, high heels, climbing to a baby grand piano where she attempts to play music. The little girl falters and tries again. And again – unfinished music. Before this final image we learn, Pirandello-like, that none of this is necessarily real. It all may be the creative writing of Clair in her diary as she tries to cope, her profession being that of a translator – she flees to attempting to create her own world. To create a city. To translate her experiences into a fictional order, but the diary finishes as unfinished musing – an unfinished tune. A feeling of desolation, of been unsettled, anxious could be the final take away of this piece.

Benedict Andrews (the Director) and the Set Designer (Ralph Myers) have created a black carpeted proscenium breadth of seven ungainly high steps, which the actors clamber upon with difficulty and unsafely (metaphor, perhaps!!). The lighting by Nick Schlieper dependently warm and comforting and atmospheric, the Sound (Alan John) mostly apparent in lengthy blackouts of urban noise and foot sounds, soothing in identification. The costumes by Fiona Crombie beautifully controlled and telling in their details. The acting style that is demanded by the set design choice is a heightened naturalistic creation that is then warped and delivered mostly out front and at a demanding speed. (The London production some 80-90 minutes in contrast to the 60 odd minutes at Wharf 2.) The character’s interaction with each other is rare and supposed. We, the audience have a reading of the play that is a bit like a staged radio play. (Act one of THE WAR OF THE ROSES!!!!!). In fact if you close your eyes the impact of the play may be much the same with your eyes open. Physically or image wise not much, other than the costume design, is useful. The writing is mostly absorbingly interesting. I am not sure, in this production, whether it is good playwrighting? It is a fairly arid, and event wise, dull evening in the theatre. I feel, having read the play, that I gained no new knowledge by having given an evening at the theatre to experience it again.

The acting by the three adult performers is as good as one expects of these performers within the givens of the directing demands. In fact it is the presence of these actors that mostly drew me to the play. It is the presence of the actors that sustains one’s interest throughout the piece. (Belinda McClory and Colin Moody last year in THE MODERN INTERNATIONAL DEAD and Anita Hegh in KILLER JOE and BEYOND THE NECK gave performances worth savouring.) (NB that the young actor, on the night I attended, was mostly, except for the limericks, inaudible, particularly when facing to the sides. Is there some coaching given to these young people to prepare them for each night? It did not seem very professional or with any real sense of duty of care to the paying audience. “What did she say?” – “I don’t know.” “What?” And on it went.... etc, etc.)

A few years ago, I saw a wonderful production of ATTEMPTS ON HER LIFE by John Sheedy, one of Martin Crimp’s great experiments in theatre and form and was so stimulated that I went several times and took friends. As we left the theatre we were handed cards advertising DEALING WITH CLAIR, another Martin Crimp (a twenty one year old venture, with the major character also called Clair.) up at the Griffin later this month. I’m not sure whether this was wise as there were many unhappy people in the crush to the exit mumbling and grumbling about that “bloody awful play.” In this production of THE CITY we had the experience of a chamber play of little consequence. No-ones life will be the poorer for not having seen it. Read it and you may feel it should have a consequence.

Playing now until August 9th.
For more information or to book click here.
Posted by Pearly Productions at 2:14 AM

Attempts on Her Life plays in Sydney at the end of this month. Kate Gaul directs for Sydney Theatre School. Quite a feast for the Crimp Cult!

Just wanted to let you know I loved your review, but disagreed slightly with your overarching description of the play.

Not that I believe anything you said was incorrect, I just saw more that what you described in the play. Different things were stronger for me, like the motivation games Clair played to gain control. Clair reminded me a little of Nora from A Doll’s House, actually.

I also wonder, which young girl did you have? Our night featured Georgia Bowry, so I'm curious about the other girl's performance.

I've quoted you extensively in my own amateur, personal blog here, just so you're aware :).

I enjoy reading yours reviews after seeing the various productions, and hope you'll write a piece on Streetcar!