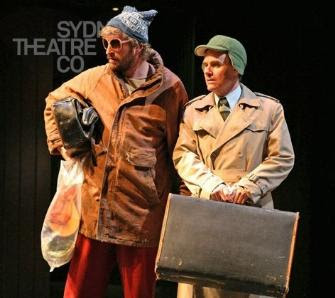 ELLING, as you can read (above) comes to us through a very numerous set of creative hands: writers, translators and adaptors, (the screen play of the novel, which was the first of three films based on the books, which was nominated for an Oscar for Best Foreign film in 2002, was also an important source of Mr Bent’s contribution). It is a slight, feel good time in the theatre.

It concerns two patients from a mental institution who are placed into the community in government accommodation as a means to “empowerment”. This program, by the Norwegian government, “places great emphasis on those integrated back into society living a normal life, promoting independence, improved living conditions and involvement in everyday life.” Simon Bent, the final adaptor, says “my aim (was) to tread the fine line of tragi-comedy”..... not to ridicule or make figures of fun or “become mawkishly sentimental”. This is true of the play we witness. Mr Bent goes on to say, “It’s a classic double act, Laurel and Hardy, Vladimir and Estragon, the odd couple of the world of social services.” The key comparison in this production would be that between Felix and Oscar in Neil Simon’s classic THE ODD COUPLE. (Hardly, Vladimir or Estragon.)

Directed by Pamela Rabe it is well staged. Scene tempos seem to be fairly similar and the play sometimes flags in maintaining sustained interest, especially in the second half. Some scenes seem to be directed in an isolated way, e.g. the poetry performances, and become tour de force of stand up comedy without real integration to the thematics of the play - satirical gems and hilarious, but do not add much forward thrust in the story telling. Glenn Hazeldine, Frank Whitten and especially Yael Stone, in a series of cameo characterisations, give great support to the two principals.

Darren Gilshenan creates a wonderful characterisation of Ellling with deft comic skills and timing and a clear actor’s insight into the psychological motivations and makeup of the character.It has details from an observation of a life lived outside what we see on the stage. He brings a life-force onto the stage and fills in a back-story with more than competent joy and real physical and vocal skills serving a vision of the man. The history and aspirations of Elling “with his mad precise logic but always glimmer of truth” are clearly present and indelibly drawn. Mr Gilshenan’s Elling is a very moving and gently comic creation.

On the other hand Lachy Hulme as Kjell, although successful in the playing of the scenes moment to moment, lacks real depth. The performance is full of charm and we the audience are seduced in the moment but he never seems to enter the role and fill it out. Mr Hulme seems content with what he says and does, as the writer dictates, with no insight or resource to expand the rest of the character’s life. The narrative developments of the beautiful match box house, equipped with lighting, which Kjell builds, and the fact that he has the mechanical skill to repair a motor car seem to be random ‘miracles’ since the characterisation presented by Mr Hulme has not prepared us for those turns. Sex, mostly masturbatory, and food seem to be Kjell’s only interests. The motor skills or interests of the man are never prepared for. The performance is full of a comics tricks that are clever and rewarding but ultimately shallow. Simon Bent speculates that this couple has the potential to be a classic double like Laurel and Hardy, I would add Abbot and Costello or George Burns and Gracie Fields, but in this case we have only one of the couple (Mr Gilshenan), with the depth of human observation to fill out what makes these other classic pairings immortal. It is a let down and a clue maybe to why this production does not elevate into a wholly successful experience. Why it doesn’t transcend the writing.

The Costume design by Tess Schofield was as usual, inventive and witty. The lighting by Nick Schlieper, subtle in its contribution, as was the sound design by Max Lyandvert (At last, the source of the sound, a radio, being used to be the place of origin for the cue. {see THE DUEL}). The Set design by Michael Scott-Mitchell was relatively subdued (TRAVESTIES) and clever, although, maybe just a little over inventive in the slide box revelations, and expressive of a budget to burn. (Let’s save some money and hire an actor!!!) (Was it really necessary to have such a detailed observation of the urinals, for example? Would an image have been just as affective for these design ideas in the play, contextually.?

If the object of the choice of play was to give the audience a feel good experience this was our experience at the performance I attended, if slightly flawed. If it was to enlighten us about the difficulty of these people’s lives maybe texts by Joe Penhall are more observant and enlightening. Still, what is of especial interest in this production is the pleasure of the quality of work of Darren Gilshenan and worth the cost of the ticket. Otherwise the film is pretty good and cheaper.

Playing now until 18 July.
For more information or to book click here.
Posted by Pearly Productions at 7:07 PM