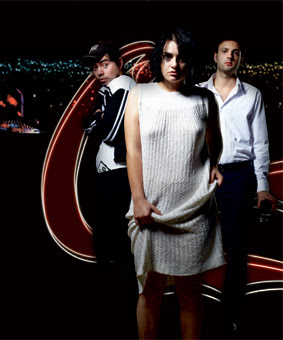 Louis Nowra wrote this play and it premiered at The Sydney Theatre Company in 1995. In the program notes to this production Mr Nowra talks of this piece as an “intimate epic” and of “using a small cast to play many characters over a large spectrum of society.” 9 actors play some 29 characters over a sprawling three and a half hours in some sixteen scenes. In THE JUNGLE there are quite a collection of characters living in the Darlinghurst/Kings Cross area, “this is a world of, straights, gays, the wealthy, the underclass, the aids virus, users and the desperate…” However, the “large spectrum of society” that Mr Nowra speaks about is very narrow indeed in this epic!!!! Having many friends in this area, I have often been a dinner or luncheon guest, and even just walking to the railway station to get home after this performance, I know, and encountered quite a collection of people who are much more diverse, in all the ways that our society can be, than the set of people that dominate the stage of THE JUNGLE. It seems that Mr Nowra has a very limited set of acquaintances that live in this ‘Jungle’ and feels a need to write about. The choice of characters are very Tarantino PULP FICTION, the definite underclass, misfit or marginalized. In 1976 Mr Nowra published a photographic essay book (of which I have a copy) called THE BEAUTY OF MISERY. It is an interesting ‘essay’ and has indicated the viewpoint, for me, that Mr Nowra has been preoccupied with most of his career. Both, the physically and socially deprived and/or deformed and the beauty of their misery. This epic is stuffed with them, not a “normal” person to be seen that is not either gay or drug addled. It is indeed a tiresome group of people that he writes about relentlessly in THE JUNGLE. Tiresome, mostly because it is a relentless-three and a half hours of it. There is no contrasted world and this production renders the final scene titled in the text: HERE COMES THE SUN as a pretentious and lame conceit, attempting to lift this world into a place of beauty, probably because he regards them as human, flawed but human. They probably are, but, not in this manifestation of them.

To be honest there were some scenes that I found interesting; the first scene after interval THE PRICE OF PRAYER is an example. (I became engrossed in the problems of Nicolae and Sean). I felt that there was some good writing in the scenes concerning Cynthia, an international touring pop has-been, although the character and the situations are immensely over familiar. Is it the writing or is it just an over ambitious project by the director (Alex Galeazzi)? It is the Direction. The ponderous direction of the opening two scenes (A bad 'girl' bubby scene – a throwback to the principal character in Mr Nowra’s first play VOICES, perhaps - the wild child, and an horrendously dated Aids virus scene between father and son.) derail the opportunity for the audience to even begin to engage with the piece. This is compounded further with the director not able to find the right tones for characterisation from his actors. There is wit in the writing and with more close direction we might find it communicated to us. The actors just seemed panicked, unable to find timing or delivery. The audience I saw it with were befuddled and bemused, unsure how to behave. (A great number had sorted that out at the interval and did not return.)

The actors are valiant in their efforts to keep the work afloat. They need to be, I guess, as they have to turn up and do it every night. (I noticed Mr Galeazzi was not present – oh, the burden of the actor, the show goes on no matter the comfort or confidence zone that they may have about the “canvas” they are showing the paying audience – the director and other creatives can stay home and forget it.) Mr Galeazzi does not seem to be able to guide some of his actors to better calibrations of their instincts and techniques. The best work comes from Ivan Donato (surely one of the most talented young actors trying to get his break in Sydney - THE AGE OF CONSENT and CHERRY SMOKE, just two recent instances of his gift and talent), Emma Palmer, Kelly Butler and very intriguing work from Gianluigi Carelli (new to me). The other actors are variable, but the most prolifically questionable has to be the decisions made by Anthony Gooley and Mr Galeazzi in the creation of his characters: The two "gay" characters, Vince and Tim, are so grotesquely conceived as caricatures and /or cartoons, that the undoubtedly clever physical gifts of the actor as a mimic are ridiculously risible if we are meant to believe them as real people. (I defy either the actor or director to show me a real live Tim in the form they have invented. If the Vince creation had a more recognisable inner life, I might buy him, but, at the moment it is simply an externalised piece of aggressive homo-phobia. Mr Galeazzi talks of his recent project ANGELS IN AMERICA and in that, the writing of Belize, also a nurse /carer, is similar, but in all the incarnations I have ever seen of this Kushner character I have never seen anything but a great admiration for the person no matter what his expressive eccentricities. I believe there is similar potential in Vince. Mr Gooley, gave, last year a very creditable reading of Biff in the Ensemble’s DEATH OF A SALESMAN, so, I lay most of the blame at the director’s feet.)

This has to follow on to the design elements. Nothing, not set (Charli Dugdale) – surely the Darlinghurst stage as many unique problems and they need to be dealt with earnestly), costume (Aasa Neeme), lighting (Jack Horton) or sound (Panos Couros) are very conducive to a good night in the theatre. They are mostly ugly and not useful in the suspension of one’s belief. Mr Galeazzi either needed more time or budget or both. But then, of course, he agreed to do the gig. No-one else to blame.

Bravo to the actors. Keep working together, and time and conscientiousness may help solve the problems that the rehearsal obviously hasn’t. It was a little dismaying to see a half apologetic curtain call. We wanted to thank you no matter what the experience you felt you had given us, otherwise, we would have left at the interval as well. Bravo.

Playing now until 8 August.
For more information or to book click here.
Posted by Pearly Productions at 10:44 PM