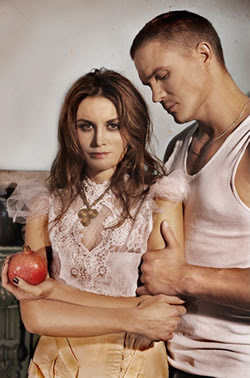 Photo - Alice Parkinson and Conrad Coleby - Lady Macbeth of Mtsensk
ARTS RADAR in association with B Sharp present the world premiere of LADY MACBETH OF MTSENSK by Robert Couch, adapted from the novella by Nickolai Leskov in the Downstairs Theatre.

Robert Couch and Joseph Couch have taken the 1864 novella by Nikolai Leskov and have adapted and staged it for a 2009 audience. This is a famous story made more famous by the Shostakovitch Opera which we have seen in Sydney this year from the Australian Opera. This version is fairly truthful to the structure of the major events of the original. A straight forward and affectionate version. (An act of romantic admiration that has a vanity project feel about it.) It is the novella subjected to a fairly ordinary play transformation into another form. It is simply a retelling of the narrative that feels like a screenplay: little textual sinuosity with a dependency on sub-textual explication. Robert Couch’s version is polite and seemly; all the sex off stage and/or dressed. The Shostakovitch version has much more power and sexual tension (aided and abetted by a fabulous sexy and witty score) and Joseph Couch’s production is fairly pedestrian in its dealing and staging of the turmoil of the narrative and hardly bares comparison with the searing, confronting production of Francesca Zambello for the Opera Company. Odd to see this timidity, about this text, by this acting company at the usually brave, out-there B Sharp Downstairs Theatre. (Remember the Wedekind offer last year, SPRING AWAKENING – for all of it’s ‘horrors’, at least viscerally provocative with a very committed point of view.) It almost feels as if the antique age of this original novella requires, for a contemporary audience, a shielding from the repugnant experiences of the characters. It feels like an early twentieth century writing mode (say 1950’s) for a nineteenth century story in the twenty first century. It is essentially boring, except for those of us who, either, have not read the novella or seen the opera. As an overlap audience, as I am, I was shocked at the lack of real drama, confrontation or point of view. Its relevancy for our time, other than the possibility of a great story is lacking. The new acquaintances to the story might find it interesting but the audience I was with, in the interval, I overheard, had got the predictability of the unravelling of the narrative and were way ahead of the playwright - a BBC /ABC Sunday afternoon TV version. Why did they want to do it? WHY? What is the purpose of this use of time and space in the B Sharp program? Beyond me .

The design elements do not presage much expectation: the Set (Esther Couch), a grey tiled floor and a paint washed wall focused with a bizarre detail of an Italianate portrait of the Catholic Virgin Mary with a flaming heart, that was/is familiar in every contemporary Australian/Irish Catholic school. (I had one exactly the same on my little altar in my bedroom as devotion – set beside a similar one of Christ.) A Russian Orthodox image could not be found? Or is it a post-modernist affliction- set up by the director? It is a lit focused gesture of attention throughout most of the first act and as the production wends on, simply becomes a gnawing pedantic, on my part, annoyance. The furniture is a mixture of miscellaneous, found, mid-twentieth century table and non-descript chairs and stool. It is accompanied by Russian Church choirs and bells and folk music (Stefan Gregory), even with the Katerina singing, triumphantly, a folk song in Russian. So where are we? The Costume design (Alia Parker) and the props looks as if they have been found in a reject St. Vincent’s donation bin; its wherefore or why lacks any real clarity. The poverty of design vision and care is dispiriting. What decisions have been made to serve the clarity of the story or the characters? I found not much. When is it, what time period? Oh, maybe in all of history, except the original period of the story (as there is no reference): more post-modernist leanings?!!! Truly poverty stricken in vision, or invention or budget? Which one? The Lighting by Verity Hampson is, as usual, of a suitable quality.

The acting elicited from this cast is mostly two dimensional and relentlessly repetitive. The two leading characters played by Alice Parkinson (Katerina) and Conrad Coleby (Sergei) have very little writing to support any real depth of characterisation. (It is present in the novella surely? - It is.) This Katerina comes across as a passive, still waters run deep, psychopath- nothing more. Sergei as a stupid victim of sex projection. It is fortunate that both of these actors are so comely in their appearance, as that is the principal sustaining reason to stay connected to the piece. The personal charisma of the actors, not those of the characters. It looks and feels like afternoon soap opera writing and casting and performing. As the rest of the cast play multiple roles and are similarly thin in the depth of their renditions this must be a deliberate decision by Mr Couch. (The resumes of these actors in the program suggest that they are experienced and oft employed professionals.) The puzzlement of Mr Couch’s intentions are highlighted by the off putting choice of the Virgin Mary print (as mentioned) and the touch of the Colombine spots of pink rouge on the cheek bones of Katerina in the first act. It is supported by full glamorous make up choices by Amy Kersey and Edwina Ritchard in the long stylized (lazily, by movement coach, Peter Furness), episodes of the long walk to Siberia in the second half of the production. Glamorous trip or, again, ironic post-modernism obfuscation? The point in the visual choices are.....?

If you like story telling at the level of Charles and Mary Lamb and their delightful and harmless renditions of Shakespeare’s plays, even the horrid ones, then this adaptation and staging of LADY MACBETH OF MTSENSK is for you. The reduction of the fierceness of this story and its psychological investigation by this company is Disney like at it’s most careless and disrespectful. The modern relevant, confronting contemporary theatre version you can catch at the Australian Opera in a few seasons time, perhaps. When it comes back to the repertory.

Playing now until 26th July.
For more information or to book click here.
Posted by Pearly Productions at 10:10 PM

Asking why this has been included in the Downstairs program is very pertinent.
When it comes to programming they seem to have lost their way there.
Is it really acceptable to have so many in-house productions in a season as is the case with their latter 2009 program? It's tough to say since there is no clarity or transparency in their programming guidelines.
Thanks for the warning about this show Kevin. It sounds pretty on the nose.