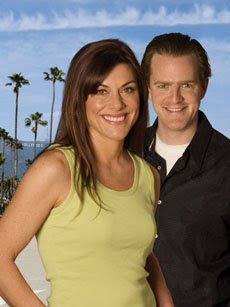 This is the second play by Douglas Carter Beane we have seen in Sydney this year. AS BEES IN HONEY DROWN was presented at the Darlinghurst Theatre as part of the background to the Sydney Gay and Lesbian Mardi Gras festivities in February. The principal characters in this play are also entangled with the plight of being homosexual and in the world, or edge of it, as a celebrity, and the difficulties that that fact may make for the individuals. The characters here include a hard-driving Hollywood agent (Diane, a lesbian) [Alexandra Fowler], her budding screen idol client (Mitchell, a “wants to come out of the closet” homosexual) [James Millar], a sexy young drifter (Alex, a bi-sexual {in this performance, a slightly intellectually impaired individual} rent boy) [Lindsay Farris], and a needy girlfriend (Ellen, hetero-sexual who becomes pregnant!) [Alexa Ashton.]

Mr Beane has the gift of the gay, glib “gab”. A kind of reckless, cynical satirical eye, and, based on the two plays of his I have seen this year, a sneaking admiration for the shallow world he writes about. He has a way with the quip that made the television series THE GOLDEN GIRLS a cultish hit. eg.1. Ellen: "Alex save me from the remains of what was no doubt once a decent club. The publicist said I was on the list and now that I see who else is on the list I want my name taken off the list." 2. Diane: "Do you hate me? Is that it? The way I suppose all gay men hate women unless they’re in a black-and-white movie and suffering majestically." This is funny, I confess, that I laughed some (especially at the stuff of Ms Fowler’s character), it’s just that it is in such abundance that it is wearying and there is very little substance of the production of this play to give it ballast. All four of these characters are, in the end, quite despicable human beings motivated from the basest of needs: greed and power. And what is worse they all triumph without impunity.

This play was nominated for a Tony (Antoinette Perry Award, New York, Broadway) in 2006, the first production opening in November, 2006. Here are some of the notices (Quoted from the published text.):
"Theatergoers have cause to rejoice. Devastatingly funny, with dizzy, irresistible writing that brings down the house." - THE NEW YORK TIMES.
"A fun evening, full of wit and wisdom." - THE NEW YORK POST.
"Big fun and an out-and-out delight…. Don’t be surprised after seeing it that you giggle in your dreams." THE NEW YORK DAILY NEWS.
"Audiences no doubt will be tickled by the satire’s risqué humour and hint of topicality… Clever and funny quick-witted dialogue." - VARIETY. (Interesting that these reviews were before the devastating challenge to the GREED IS GOOD philosophy with the crash of the money markets around the world.)

However, the Sydney press have similarly been encouraging, which is why I went. (Some were admiring the Ensemble choosing this play for their subscription season - so risky - it is, sadly, in Sydney in 2009 – still risky. Only one third or less of the theatre capacity was filled.) However , my experience, generally, on Tuesday evening ended up being very dispiriting. Ms Fowler as the agent, Diane, was best. After an audible “Warm-up to speed” in the early part of the play (several textual mistakes and corrections, extempore), she found her stride and drove with ferocious energy through a fairly difficult role (having lots of direct conversation to the audience and, harder, lengthy telephone calls [in other words playing and responding to imaginary figures that we never get to see]), managing to keep the play afloat-pushing and attempting to push the other actors into gear and to “playing” with her in the interactions she has with them.

The problem with the other performances seemed to emanate from the work of Mr Farris. Mr Farris, as Alex, is the fulcrum to the other characters choices, and needs to be affecting the other character’s lives in a fairly passionate way. Mr Farris is, however, giving a pre-packaged conception of an actor’s creation in defiance of what ever else the other actors are doing or the audience is observing. It is both vocally (an extremely, consistently annoying, vocal character lilt) and physically mannered in the most extraordinary way, drawing attention to the actor’s choices. He has no narrative drive just character revelation within the constructs of the actor’s creativity - forget the writer’s input!!!! He seems to be playing a suffering, misunderstood, perhaps intellectually impaired adolescent with a heart of gold, a martyr saint, Saint Alex. However, one of the most interesting clues from the writer, for me, when I read the play, was after the trick, Mitchell, falls asleep, Alex robs him of his money and cigarettes, goes to leave but then stays “Sits across from the sleeping john, lights the cigarette and stares at this man. With the coolness of a surgeon.” WITH THE COOLNESS OF A SURGEON. Is Alex a calculating grifter / grafter or the victim of circumstances? He finishes with a $10,00 cheque and an easy exit from all the complications!!! Mr Farris has a very consistent IDEA of his character but is not in action with the clues of a close reading of the story of the writer. He forgets that character is the sum total of what Alex says and does in the pursuit of his goals (in Stanislavskian jargon, objectives), not what he demonstrates creatively. (Is there a better play here at work than just the glib comedy? It is what I felt about the production of AS BEES IN HONEY DROWN as well. Have the Directors fallen for the Camp Humour and ignored the very astute social observation and criticism? Both qualities would make a very satisfying night in the theatre.) Mr Farris ignores not just the writer but ignores the other actor’s characters contributions as well. As a result Mr Millar is forced into playing in another play, where he appears to have to play both parts in his scenes. He ends up playing in the style of musical theatre genre - earnest, and mostly externalised, one expected that Mitchell was about to burst into song at the end of some of his speeches. Ms Ashton on the other hand plays her work as if it were a television soap script. It has all the homework of an insightful actor but not many of the skills of the commercial comedy that she is playing in – a limp body and poor comic timing, the speeches delivered naturalistically, full of pauses and considerations having to, generally, like Mr Millar, to play the scene she in, by herself.

The director, Andrew Doyle, has not managed to find a way, in the rehearsal time, for all of his talented actors to play collaboratively in the style and manner of the writing or to connect to each other. Four actors playing in four different types of plays - only Ms Fowler showing the way. The Set Design (Anna Ilic) is practically solved and is not an impediment (the odd thing is that across the back wall there is a photographic cityscape that looks, to me, more like Los Angeles than the city, that all but, perhaps 5% of the play takes place in: New York - strange error of detail!!?) Costumes and Lighting (Bernie Tan) are serviceable. There is no Sound design, mostly just the soundtracks from Hollywood movies. (e.g. HIGH SOCIETY, BREAKFAST AT TIFFANY’S)

At the cost of $54 plus a $4 handling charge this was a fairly luke-warm performance of what, in this production, looks like a fairly flimsy comedy that needs all the discipline of finely tuned artists it can find to pull it, consistently, off. This Tuesday night, 28th July, it didn’t.

The Financial Review on the 27th July, 2009 in an article by Katrina Stickland about the Theatre Box Office tells us: “Box-office takings for the live performing arts, including musicals, concerts, theatre, opera and dance, slumped nearly 14 per cent last year, suggesting the arts have not escaped tighter discretionary spending.…. Total box-office revenue fell 13.6 per cent, from $1.23 billion in 2007 to $1.06 billion in 2008, the lowest level since 2005….. Consumers have not been given much financial incentive to wash away their woes. The average ticket price shot up 16 per cent to $76.60 last year. That’s the biggest price rise since the surveys began in 2004, highlighting the extra pressure on companies to make up for revenue lost in other areas such as sponsorship and philanthropy.” Attention to quality details needs to be vigilantly demanded, and practised, otherwise I spend my money elsewhere and with greater discretion. Pity that, as I actually love going to the theatre in all of its forms - both comforting and challenging. All it needs to be is. WELL DONE.

Playing now until 15 August.
For more information or to book click here.

Posted by Pearly Productions at 8:19 PM

Yes, I felt the same about this piece as I did with Bees in Honey at Darlinghurst, that the writing is everything a gay man, or conversely, his hag, wish they had the wit and expedience to deliver in their everyday lives. Fantastic in your head, but kind of wet on the stage. Writers play out these quick fire scripts that seem to need the timing of snappy film editing to deliver the rhythm. I find it in Van Badhams work as well. SHould they be writing for screen or are the directors misunderstanding. Don't know. Whatever it is, it is dissatisfying.

I recently came accross your blog and have been reading along. I thought I would leave my first comment. I dont know what to say except that I have enjoyed reading. Nice blog. I will keep visiting this blog very often.