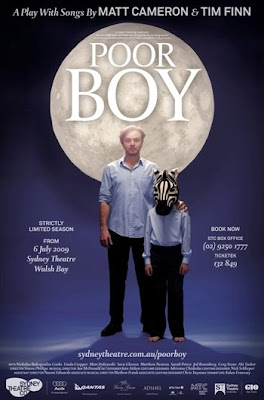 The most astounding thing about POOR BOY is that the Artistic Directors of both the Melbourne Theatre Company (Simon Phillips) and the Sydney Theatre Company (Andrew Upton and Cate Blanchett) believed that this play represents the best in new Australian writing and that it deserved a major production. The fact that the January, 2009 production in Melbourne received very wan reviews and no real development has gone on, seemingly with the text, since then, its presentation in Sydney in this form, many months later, seems very disappointing. Just how serious are we about the development of good plays, I wonder? My afternoon at the theatre was excruciating in almost every way.

The Set Design by Iain McDonald, Costume Design by Adrienne Chisholm and the Lighting, Nick Schlieper, were three features of the performance that one could enjoy. Romantic, skeletal set with stairs and metal banisters with gauze walls, that became transparent, imprinted with a beautiful design of William Morris-like wall paper, weathered wooden floors, with an aesthetically detailed cloud backcloth covering the width of the enormous stage, gorgeously lit with romantic contrasts of the blue of the sea and the warmth of the sun – caressingly calming and redolent with wistful memories of a sea side holiday house of one’s romantic backhood. (The elevator platform for the band with a masking blind seemed to me an excessive design budget touch. Could some of that money be spent on a between season re-development project? Well, no matter the quality of the essential product, it at least looks good, eh?)

The cast is made up of actors that can act, actors that can sing and one or two of them that are known to be able to do both. Linda Cropper (Viv) does well as an actor that can sing (who knew?) (she gets most of the I HOPE I NEVER song that I recognised from my youth- “they don’t come more iconic than this’’ says Matt Cameron in the program notes) and does remarkably well in both departments. Matthew Newton (re-creating a role premiered by Guy Pearce in Melbourne) as the spirit/ghost adult, Danny, is very deft at the singing and in making the acting of a very difficult role relatively believable - it is a very sensibly and sensitively judged performance. Greg Stone (Sol) does well both as a singer and actor, until, the enactment of the denouement of the play (maybe it defies playing –I had to close my eyes – it was all the elements that were painful: the writing and the acting of it, so excruciating. Mr Stone had turn upstage to sustain the moment). Matt Dyktynski (Miles) sings well but finds it hard not to sing his spoken text as well, avoiding the finishing of ideas (or objectives) in the lines he has, and, steadfastly, is unable to reveal any inner truths - the character is a serial sex addict who, in the writing, is not explained or dealt with in any way except as a slightly sympathetic victim of being a second sibling. Sara Gleeson (Sadie) has a good go at acting and singing a very confused young girl/woman (– a Lolita by the sea) (another whinging second sibling) but ends up confusing the audience as well in what to make of her. Abi Tucker (Clare) has little to act but sings deeply. Unfortunately, Sarah Peirse, as Ruth, the grieving mother, a major character in the story, gives a truly uninvolved performance of superficial externalisations both physically and vocally. The spoken text, mouthed and expressed merely to give information with not an inkling of truthful characterisation or sense of evolving journey. Demonstrating emotional states and forgetting to just simply tell the story so that we can endow the feelings. So, that we can have the catharsis of the character’s journey discovery instead of being told what it is. One can only assume she has been cast for her singing ability, which I barely remember. The young boy actor, Nicholas Bakopoulos-Cooke (Jem), was perfunctorily guided through his paces.

The writing of this piece by Matt Cameron is very difficult to take seriously as playwriting, maybe poetry, but when this poetry is uttered on the stage, as it is by this company, directed by Mr Phillips, it is almost too portentous and pretentious to take seriously: A plane thunders overhead, Sadie and Miles kiss passionately. Sadie: "Do you think they heard us?" Miles: "Living under a flight path has its advantages." Sadie gazes up at the sky. Sadie: "They get close don’t they? Like a bird of prey descending, claws poised to pluck you from the nest" Miles : "If only." IF ONLY, I groaned. Or again... Viv: "Where did he go? The boy we loved who loved us in return…?" Sol: "He always had a thousand-yard stare on him." Viv: "Wonder where he got that from." Sol: "The horizon never let a man down.". There is much, much more like that. On reading the text I can’t quite work out whether it is the writing or the directed acting style that undermines the performance. The melodrama of it all is audacious in its predictability. Danny (short for Daniel, in case you don’t get it): "I remember (Whilst wearing a Zebra mask) walking on the dark keys of the zebra crossing, the black notes, sharps and flats, till I stood in the middle of the road, cloaked in fog, and I saw the dull glow of the headlights, feline eyes fixed upon me, the lion bearing down on its faithless prey, and I waited….. I waited for that car to come…. 'Daniel into the lion’s den…..' (Silence). Forgive me." OOOOOHHH!!!! Of course, one of the added ingredients is the fact that the two Danny’s wear a zebra mask as well, at different times, connecting us to the actual physical source of all this much ado, of two accidents on a Zebra road crossing!!!! We also have a rain of silver glitter to mark the ending moments of the play at the back of the stage accompanied by a musical crescendo!!!

The songs of Tim Finn all sounded the same to me and I, despite the fact that the show was all painfully micro-phoned, can not recall a lyric except the iconic I HOPE I NEVER. The orchestrations are all too crashingly-boring similar to distinguish them, one from the other, for me. Maybe it has something to do with the observation that Simon Phillips makes in the Director’s notes to the published text: "POOR BOY is an unusual if not unique hybrid. Its songs don’t develop plot or character as they would in a conventional musical, nor do they offer an objective or ethical overview in the style of Brecht." The character of all the songs are the expression of one character, then, that of the composer, Tim Finn, and so they are remarkably unhelpful either for the characters in Matt Cameron’s play, since it is the one character voice all night, as per his recordings, the essential Tim Finn, or in any story telling-narrative extension. Mr Phillips goes on: "Rather they sit both outside and deeply inside the action, as if their oblique connection to the specifics of the plot gives us a window into the deepest internal monologues of the characters, voiced in appropriately poetic language of the soul." Since most of the acting is not entirely rooted in complex characterisation supported by internal monologues, let alone deep internal monologues, this fails to appear as well. To finish Mr Phillips eloquence in the notes: "This seems entirely appropriate to a work so essentially concerned with the mysteries of the human spirit and its potential astral transmogrification…… But while its form and premise are navigating theatrical and spiritual frontiers, its heart and soul are in a universally recognisable harbour. Above all it remains a simple and moving testimony to the human quest for family and belonging. Unsinkable." The portentous expectation of these written notes (Written before rehearsals began) as expressed by Mr Phillips is only wishful thinking. Certainly, in execution, on Wednesday afternoon, July 22nd, at the Sydney Theatre it was. Clearly, as is Mr Cameron, Simon Phillips is a big fan of Tim Finn. (So must Mr Upton and Ms. Blanchett). For the rest of us who don’t really know Mr Finn’s work intimately, it is a fairly dull and painful couple of hours. In my case, this play was far from "unsinkable", it sank like a Sol’s boat, the Neptune into a very deep "abyss".

In the program notes, there is a wonderful telling of the story of SWARNLATA: A young Indian girl who remembers in vivid detail another life, geography and history. A re-incarnated soul. The two families in this story, strangers to each other, as are the families in POOR BOY, reveal a maturity and spirituality that is admirable for its good sense and human dignity in working out the ‘miracle’ of this young girl’s fate. One wished this play had a similar feel. This vision in Australian terms seems to be not poor boy, but impoverished.

I read James Waites blog about this work and although I have reservations about the production of THE CITY across the road, I can only agree with him, it is, relatively, a play of genius. Good writers have to be at the centre of the performing arts. And time needs to be given for the nurturing of them. Last Year’s THE PIG IRON PEOPLE by John Doyle had the same feel of lack of nurturing.

Playing now until 1 August.
For more information or to book click here.
Posted by Pearly Productions at 11:41 PM