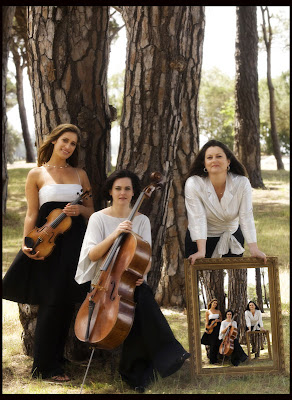 I attended my first concert by the TRIOZE Ensemble. It is made up of Kathy Selby, Piano; Niki Vasilakis, Violin; Emma-Jane Murphy, Cello. As I have mentioned before I merely diarise my experience as this is not my field of expertise. I went to the concert because of the programming, Arvo Part and Kats-Chernin being points of fascination and admiration for me.

On the night I attended the order of the material began with Australian composer Elena Kats-Chernin’s piece; The Spirit and the Maiden. This is Ms Kats-Chernin’s third piano trio, this one completed in 2004. It is built around a re-constructed Russian folk story and in the printed program each of the three movements has an episode. It is, recognisably, music of this composer and as I am a fan, had all the usual pleasing thrusting energy and syncopated notes that is underlined with a smooth melodic undertow. Its at once gently sprinkled at you and yet flowing around you. Short and stimulating.

This was followed by Johannes Brahms: Piano trio No3 in C minor, Op.101. As in the last musical note I wrote for the ACO Concert: Great Romantics, I confessed no great understanding or appreciation for this composer. However the first two movements of this piece arrested my attention and took me to a sustained place of curiosity. It was not to last, and in the last two sections, my mind began to wander. It was not the playing, simply, the music does not hold me.

After the interval a short but glorious work by Arvo Part: “Mozart-Adagio”- for violin, cello and piano (arranged from the Mozart Piano Sonata in F Major, K.280). This “was written in 1992 as a memorial to the Russian violinist Oleg Kagan, one of the composer’s close friends. It was also composed to fulfil a commission from the Kalichstein-Laredo-Robinson piano trio” The music has all of the simple signal externals of the composer: “This arrangement begins with harmonies that sound bell-like and underline Part’s philosophy:” I have discovered that it is enough when a single note is beautifully played.” Interwoven into the mostly, faithful homage to Mozart, are silences. They are so pregnant with space-wonder, that one holds one’s breath. The final minute is divine in its organisation and placement. This is why I attended this concert. Arvo Part is my favourite contemporary composer.

The last piece, Bedrich Smetana’s Trio in G minor for piano, violin and cello, Op15. Smetana is known as the “Father of Czech Music.” In the nationalistic cultural fervour of this nation this composer holds an inspirational place. I had never heard the work before and its energy and tempo contrasts, melancholic and restless, captured me and exhilarated.

This is the first time I had heard the TRIOZ Ensemble. Each of the players impressed me both individually and as ensemble. Intellectual rigour and a love of the music. They do not quite have the dramatic/theatrical tensions of the ACO Ensemble - a little too held or a little academic in their presentation - particularly in the rests between the movements - but well worth catching and supporting. As the rapport with the audience’s develop, their obvious passion for the music might lead them to a more shared passion in their playing, with the urgent need to express and share it more viscerally as a more holistic experience - not just the intellectual one. Immaculate but slightly dry.

P.S. The program notes were/are excellent for a philistine such as myself, particularly the historic contexts which immediately, imaginatively extended my care when listening. I had had a terrible sequence of theatre experiences in this last few weeks and the music concert was a positive palate cleanser. Music does soothe. More of it, I think.
Posted by Pearly Productions at 5:27 PM