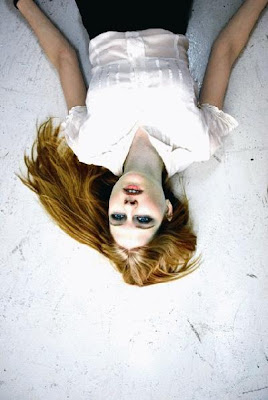 DEALING WITH CLAIR is a very early Martin Crimp (1988) and it is interesting to see alongside the STC production of the more recent Crimp play THE CITY (2008). Whether it be the “auteur” tendencies of Benedict Andrews or nor, or, if it is just the development of the writer’s styles (and aesthetic interests) over time, I found Cristabel Sved’s Direction of DEALING WITH CLAIR very engrossing and clear in the service of the playwright. This work set out to solve the writer’s intentions as writ without an overlay of the director’s aesthetic explorations obfuscating the substance of the play.

Ms Sved had an authoritative and intense creative grip on her intentions from the first moment that I, as an audience, engaged with the offers. The Set (William Bobbie Stewart) that is present on entry to the space, Lighting (Verity Hampson) and the Music-Sound design (Steve Toulmin) are immensely intriguing and provocative. Things to deal with. What follows when the play commences are introductions and then expansions of characters that Ms Sved with the actors have carefully considered, textually, and delightfully, physically. The vocal energies and sounds seem to have been orchestrated like a beautiful chamber orchestra of six. The physical work, individually characterised and collectively organised are detailed in their “choreography” so that every gesture and pattern, on this small stage, resonates with possible meaning. The Costume Design (again, William Bobbie Stewart) in all of the scenes is so finely calibrated and detailed in the journey of the characters that much pleasure can be gained from just deciphering those directorial/design offers. Much to deal with. Here is a Director that with all of her artists explored patiently and creatively the possibility of how each moment on stage is useful in keeping the narrative and its social observations always moving forward. It can be quite an intellectual workout. It was also a jolly good narrative. A thriller of money intrigues, sexual longings and possibly murder.

Martin Crimp’s play has some of the learnt knowledge of maybe a close study of Harold Pinter. The plot and the characters have all the skilful menace and wit of the best of Pinter, structure is meticulous. The wit is subtle and subversive. The characters are so true to real life that the middle class greed and sexual urges, lustiness of both needs, revealed in this production, is frighteningly easy to recognise as traits of our very own behaviour. The play uses the world of real estate, with all of the games of dealing, money and sex, to ensnare us into the witty critique of a world that we have allowed to blur our own moral principles to get more. To paraphrase: What does it profit a man if he gains the whole world and yet lose his own soul? This is a question that comes to mind while watching this work. It is even more pregnant in the wake of the present economic catastrophe, and particularly ominous as you feel the “monster” economics of old slowly reviving – the stock markets rekindling as my evening news bulletin told me when I got home. A play that despite its age is still relevant today (as all good plays are).

What Ms Sved has added in her direction of the text of this play is also a visual delight in the masterly footsteps of Alfred Hitchcock. Ms Sved with all her designers leads us to intriguing clue to clue, to underline the writer’s intentions. The subliminals smartly screwing up the tensions of the evening. The change of clothing of each character is telling in each scene. It is like all good design however, subtle. The Sound design by Steve Toulmin, the choice of sounds and the volume levels, seemed to me, carefully executed. The lighting by Verity Hampson, for example the noir usage of the spin of the blades of the ceiling fan and it’s vertiginous effect as the play moves to its off stage denouement, clever. The metaphorical cheek and trick of the set is arresting as well (– maybe over the top?!!!)

Ms Sved has spent time working with the actors on the minutiae of the psychological gestures of the character. The shifting/lifting/splitting of the shirt revealing the vulnerable lower stomach and back of Mike (Ed Wightman) as he drunkenly sprawls on the plastic covered black leather divan, accompanied by his scratching/rubbing/stroking of it with his “paws”, bubbling with alcohol and boiling with sexual yearnings for his wife/nanny/or house dealer is outrageous in its display and true to character. And all of the actors/characters have similar gestural clues that are revealing of the stages of their storytelling. The arrangements of stage patterns for the scene changes choreographed for juxtapositional psychological re-enforcements. This is very densely loved work. The joy of creative invention at the service of the writer.

Laura Brent (Claire) begins the play with an enormously difficult one-sided telephone call. The vocal energy and the detailed listenings (to the imagined conversation) are physically charged. The use of levels: floor crouch, seated, standing etc judged exquisitely for propelling our interest into the information of the text. The following scene is electric in the dynamic focused energies of Ed Wightman (Mike) and the rapport between Ms Brent and Mr Wightman very exhilarating. Mr Wightman gives a very brilliantly sustained performance over the whole of the play. Sarah Becker (Liz) is detailed in the work, (maybe just a trifle pushed on occasions – drawing attention to the work rather than let it be endowed by the audience.) Boris Brkic (James) is intriguingly contrapuntal in energy to the other life forces on the stage, and the sinister pointillist detailing of his portrait of a very sinister "gentleman" is a little unnerving in its gathering details. His character, a dealer in pictures and the intimation of the "vanishing point" in his conversations add to a sinister suspicion that is Hitchcockian in this productions revelations. Kelly Paterniti (Anna) in a small role as a sexually simmering Italian "nanny" adds to the heated glues of the sticky stains of these people. Josh McConville acquits himself well in three cameos. His Toby especially ripe.

This is a very good night at the theatre. Not always feeling as sure as it could be, but the parts are worth savouring, even if the whole is not completely cooked. Well worth seeing. And as dinner conversation the contrast and comment between the experience of THE CITY and DEALING WITH CLAIR is well worth having.

Playing now until 15 August.
For more information or to book click here.
Posted by Pearly Productions at 5:23 PM