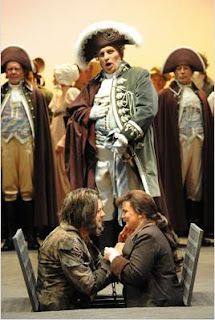 This is Beethoven’s only finished opera. Written during the dominance of Napoleon on the stage of international affairs it is in the tradition of what has been called the “rescue opera” which so the program notes tell us: "Broadly speaking ,these pieces tended to cultivate ‘realistic’ settings, with a recurrent theme of the heroic release of an innocent hero from unjust imprisonment – one needn’t labour the point that this offered a metaphor of revolutionary liberation from tyranny." In this case Florestan (Julian Gavin) is rescued by Leonore, Florestan’s wife (Nicole Youl) from the prison of Don Pizzaro (Peter Coleman–Wright). First unsuccessfully presented in 1805, it was rewritten and re-organised and performed in this re-incarnation at the Karntnertortheatre, Vienna on 23rd May 1814. It is, then, nearly two hundred years old and certainly in the libretto story telling the piece creaks with age. The lyrics and dialogue, the plot and the “black and white” characterisations (He is the villain, he is the hero, she is the heroine, he is the good natured dupe etc) are fairly obvious and silly for a contemporary audience. What is great is the music and the possibility of great singing - the stand and deliver stuff – stand in a straight line across the stage, face front and sing your heart out: the aria, the duo the quartet, the sextet, the rousing chorus. It can be amazing.

This production was first presented by Opera Australia in 1992, directed by Michael Hampe. Now rehearsed by Cathy Dadd, it is a straight forward, simple staging and arrangement of the singers on stage to facilitate the virtue of the piece: the Music and singing. The set (John Gunther) is a mammoth and impressive realistic design of a number of scenes in a formidable and diabolical castle. It is a persuasive space for the singers to play in and quickly orientates the audience’s imagination to the world of the opera, plus, the design has simple design “tricks”, to keep the opera moving with few halts of action for set changes (especially, the mechanics in the act two transfer from the prison cell to the court yard of the castle – my audience applauded the device used!!!!!) The lighting (Nigel Levings) is also atmospheric and “romantic” to clarify the moods of the settings, both realistically and emotionally.

On this night there was a recording being made for broadcast. The Score conducted by Jonathan Darlington was especially impassioned and the orchestra sounded very engaged and fervid. Of the singing, while no expert in this area, it was to my ear very engaged as well. It was, however, the voice of Julian Gavin (Florestan) in the opening solo of the second act that enlightened me to the sense of the proper scale of sound that this work really needs to take off. It requires great voice. An heroic scale. Whilst the act one singing was interesting and genuinely pleasant, the potential to reveal why this opera is respected in the repertoire, still, had not fully revealed itself. With Mr Gavin’s introduction into the performance, the calibre of sound from all the singers lifted into another stratosphere. Nicole Youl (Leonore) found a partner that lifted her expression into a more challenged and charged place. Their duet was, as history tells me it would be, moving. The work from the rest of the company, especially the chorus in the last scene of the opera, was rousing and life enhancing. Like Beethoven’s great Ninth Symphony and the Ode to Joy Chorus, this latter section of the opera has the potential to translate an audience into an optimistic embrace of the possibility of the goodness of being human and the power of the triumph of virtue over evil. (The antithesis of the message in Barrie Kosky’s contemporary adaptation of Monteverdi’s POPPEA - where the ‘good’ are punished and the ‘bad’ are rewarded). The Company all round was impressive. The less said of the acting the better. Peter Coleman-Wright (Don Pizzaro), usually so persuasive, not only as a singer but also as a characterised actor (Mandryka in ARABELLA, for instance) was disappointing. Conal Coad (Rocco) acted well but the voice sounded not as sure. I liked the work of Lorina Gore (Marzellline) and Stephen Smith (Jaquino) especially in the Opening act ‘love’ scenes, both in the singing and the acting of the situation, which requires some silliness to get through.

It is the music of Beethoven that is the joy of the experience and well worth hearing in this age of cynicism about the human condition in our times. It is a necessary tonic, for some of us. It can inspire the necessity to endure. It is indeed, still today, a “rescue opera”.