I Capuleti e i Montecchi (The Capulets and the Montagues) 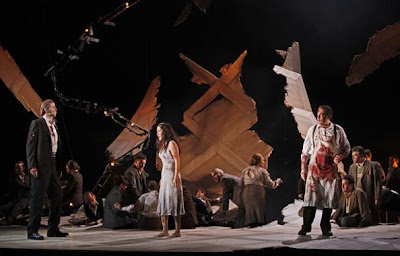 Opera Australia presents at the Opera Theatre, Sydney Opera House: I Capuleti e i Montecchi (The Capulets and the Montagues). Opera in two acts by Vincenzo Bellini. Libretto by Felice Romani.

I Capuleti e i Montecchi by Bellini is a co-production with Opera North (UK) and Opera Ireland. The first thing to say is, for those of you, like myself, unfamiliar with the opera, “It’s not Shakespeare.” Based on other material prior to the Shakespeare play (Ovid etc), this story line is set in civil war between rival factions, the Capuleti and Montecchi, and like the more famous play’s story line, Giulietta Capueti (Emma Matthews) has fallen in love with Romeo Montecchi (Catherine Carby). Orpha Phelan, the Director notes “.....On the one hand it is about civil war, as experienced the world over; on the other, it shows how two people’s lives are doomed from the beginning, ruined by inherited conflict.” The details of the opera and more famous play are different but the general shape of the tragedy is much the same: The two love each other despite their opposing families; Giulietta is betrothed to another, Tebaldo (Henry Choo); there is a love scene in the bedroom between the two young ones; to escape her predicament she takes a drug to induce a sleep that looks like death; Romeo discovers her in the family tomb and slays himself, only for Giulietta on awakening in the tomb/vault to do the same to herself, broken hearted. The major difference is the civil war background.

Ms Phelan along with her Designer, Leslie Travers have set the place in a contemporary image of non-specifics. “It would have been all too easy to have given this production a (definite) time and place..... Afghanistan, Bosnia or Iraq..... St Petersburg, Chicago or Belfast.” (In fact because of the Irish background of the director and the use of the boy-soldier in the production (costume choices as well!!!) and knowing the Martin McDonagh plays (LIEUTENANT OF INNISHMORE and THE PILLOWMAN etc), Belfast and ‘the troubles’ kept resonating tragically as I watched the performance). The set in act one, a triangulated wooden floor of parquet, crumbling in the downstage edge. Flown pieces change the locations, beautifully assisted by delicate and intricate lighting (Chris Davey). In act two the static set is of the floor that has been blown apart and suspended in space, in time. Very symbolic. The costumes are modern dress. The direction, placement/staging of the singer/actors is very thoughtful and dramatically pleasing, mostly picture images, especially in the chorus scenes; non-naturalistic.

The Conductor is Richard Bonynge. Mr Bonygne’s career history to this form of music: the “bel canto” repertory, is probably the reason that we are seeing this opera in Sydney. The Opera is melodious (Verdi praised Bellini in particular as the composer of broad melodic curves) and has some pretty music (“…[Bellini’s music has a tendency] towards an ecstatic unfolding of sonorities……[and] it is above all in this ecstasy of sound that the Romanticism of Bellini’s music is grounded” ) but dramatically lacks the oomph, to my ear, to lift it into a first grade experience. Whether it is the passion of the music or it’s rendering here, or, whether it is the singers under playing the drama for vocal safety, it is a low voltage experience.

“Bellini’s music comes from the heart, and it is intimately bound up with the text”, says Wagner. “...(Bellini’s) opera, in common with Italian Opera in general between about 1815 and about 1850, present a sequence of scenes depicting particular emotions, not always psychologically connected. No regard was paid to whether a good or bad character was expressing these emotions: villains sing in the same beautiful cantabile style as the purer souls. A love-aria is a love-aria, no matter who sings it.” – pure bel canto the definition of which is quoted in the program notes by Judith Armstrong: “singing, that is one continuous melodic language of the emotions’”- (a POOR BOY connection for me.) The lack of character development/coding, maybe, is what throws the work out of balance to my ear. Maybe the singing, then, in this performance was too cautious? The recent Metropolitan Opera production screening of La Sonnambula was invigorating. NORMA and I puritani, I can recall, thrilling. Certainly, the Callas recordings make NORMA so. The Sutherland performances of NORMA in the Sydney Opera House were so as well.

This is a pleasant experience, but not a great night in the theatre. I relish the opportunity to see performances of a work that I have never seen before or I don’t know. If you have the same curiosity, do go.

Playing now until September 9.
For more information or to book click here.
Posted by Pearly Productions at 2:14 PM

Sweet music but where was the passion and danger? The AO needs a drama producer who can make sense of the opera dramatically. This production had dull lighting aimless crowd scenes inappropriate costumes lame fight scenes and a pants role where Romeo was poorly dressed and not taught how to move. All of these elements are not hard to fix.