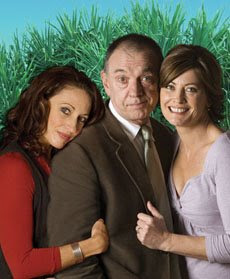 Oh, what is all this guff about David Williamson and all the other contemporary playmakers etc? Horses for courses. Please!!! THE WAR OF THE ROSES written by Tom Wright and Benedict Andrews, THE WOMEN OF TROY also written by Tom Wright but with Barrie Kosky (and I presume the up-coming POPPEA by Barrie Kosky from the Monteverdi Opera, Poppea) are worthwhile contributions to the Australian theatre culture. And, I have to say, my very pleasant night at the Seymour Centre on Thursday night gave another worthwhile night in the theatre. All of the above experiences different. All differently intended (perhaps) but/and all stimulating THEATRE. Whether I had spent my money or time well was not part of my immediate concerns or worries with this work, I felt happy, elated and immensely “validated” (how weird) as an Australian on my exit.

A few years ago I returned to Australia after a longer than usual stint overseas, and, one of the first things I did ,was walk along the concourse from Circular Quay to the Opera House Drama Theatre to see a play. The sheer beauty of the Harbour and The “Building” on a sparkling afternoon overwhelmed me and gave me a rush, of not quite patriotism, but, a relief of being home and a warm validation of being part of a tribe called Australian. (How embarrassment!!) The play I went to see was David Williamson’s AFTER THE BALL. I remember Gary McDonald was in it and that it had to do with families and their relationships after the metaphoric “ball” of someone’s life, and not much other detail, except the total joyful recognition of the characters and the events in the dramatised life of the play and the immense excitement of knowing where I was and who I was as a result of those few hours spent with the comic, satiric, dramatic machinations of David Williamson. I knew these were Australians and I knew, I, and all the people about me, knew they were as well, and, boy! were we rapturously grateful that someone could put us up there on a stage to give us the cathartic experience of recognition, confirmation and a sense of belonging somewhere in the world, together. I felt happy to be HOME amongst my tribespeople, and not amongst strangers anymore, and happy to be alive.

During and especially after the performance of LET THE SUNSHINE, I had similar resonances. Not as dramatic, as I have not been away from home, but still recognisably intense and gratifying. From the first simple moment when William Zappa appeared with what looked like a map in his hands to the long pained glance he gave to a pile of collapsed wood pieces and we, the audience, recognised the daunting agony of dealing with the instructions for what may have been an IKEA furniture kit, we laughed. Not yet a word spoken, but all of us knew exactly where we were. We all had been there. Puzzled, stupefied and momentarily hovering between panicked surrender to the problem and stuffing the mess in the storage room or a desperate summoning of courage to solve what we have been told is child’s play and finishing with a bookcase (in this case). From then on we were on board. Mr Williamson has the insightful knack to hone in on the sociological incidents of the world of most of his fellow travellers and the gifts to then select, delightfully, the right pregnant moments of dilemma and explicate them with wit and economy and meaningful impact.

This play about two sets of parents having to overcome there personal, sociological and political dislike of each other and to negotiate the relatives-in-law for the sake of their beloved children and the grandchild, is in the territory of Mr Williamson’s growing up and now old. We began the journey way back in his and our youth with plays of friendly recognition, we saw ourselves as the protagonists in DON’S PARTY; WHAT IF I DIED TOMORROW; THE CLUB; MONEY AND FRIENDS; AFTER THE BALL and many, many others and now with him, relieved, in LET THE SUNSHINE. Once we were "root rats and alcoholic, amateur politicians", and after many other metamorphoses we are In-laws and Grandparents. What we could brawl and sprawl about in our youth we have to tread more circumspectly around and find a way to civilly endure and negotiate because we see our immortality in the children and the children’s children and we definitely want to be part of it no matter what polite principle we have to seemingly cross to have it.

Story, characters, true observations of, wit and musicality of writing style make this writer a “genius” of the playwrighting task. What Mr Williamson has achieved, and in this play still achieves, is immensely skilful, and upon analysis is technically amazing. The musical scoring of the text is deceptively naturalistic but on trying to solve it requires great objective, classic, comic insight and “textual musical” skills. (Which, maybe why, Gary Mc Donald is one of Mr Williamson’s greater interpreters.) Within the “oeuvre” of this play in his repertoire he has no equal, in Australia, (He, also, writes very vividly in other “Oeuvres” very brilliantly Eg. FACE TO FACE, IN CONVERSATION, CHARITABLE INTENT.) It is interesting to see Brendan Cowell’s RUBEN GUTHRIE or maybe Tommy Murphy’s SATURN RETURNS this year, and see, from my perspective, similar, new generation attempts at the “oeuvre”. RUBEN GUTHRIE with a hot spot issue (alcoholism in the Australian scene) that needs urgent contemporary attention with its uncomfortable observations of parts our society, tempered with comic jokes to soften the cultural mirror confrontation for the audience and make it less hard to sit through. Or, SATURN RETURNS with the young and carefree, being confronted with the decisions of their life so far, being confronted by swift footed time - 29 nearly 30!!! YIKES!!!!! Comedy and what is possibly new, Fantasy (- one of the tools of the English writer, Mr Ayckbourne’s fabulous bag of tricks) to help the audience digest life’s bitter pills. Compare the achievements and see why Mr Williamson is still paramount in his field and I hope no matter how much critical pain he feels, will continue to survey and record the lives of a generation of his fellow Australians. (Kudos, of course, to the other younger writers as well, but study Williamson’s technique closely and with their own perspective gifts, the contribution that they can make will be as spectacularly continued and just as theatrically rewarding and sociologically valuable, I hope.)

Sandra Bates is directing her twelfth play by David Williamson. It seems to me, Ms Bates great gift here is to cast well and simply put the actors on stage and let them do their stuff. William Zappa, (one of Australia’s most assured actors),Toni Scanlon, Kate Raison and Andrew McFarlane ( in his sixth Williamson) are the older In-Laws and are wonderfully astute and clever in their playing. Mr McFarlane, particularly, is amazing in his adroitly comic choices, his daring audacity in the creation of the “capitalist pig, Ron”. It is a comic wonder of bravura daring. Here, is an object lesson for young actors to watch, an actor of consummate skill, especially in physical range and demonstrated flexibility, and great ‘bourgeois’ comic taste and timing. Observe and learn.

The younger characters, played by Justin Stewart Cotta and Emma Jackson ,ground the world of the play’s dilemmas securely and yet venture into comic creations that are finely balanced between truth and “dare”- dare to be funny. The coupling of these two actors together, results in a palpable sexual energy on stage and they bring it to bear, blisteringly, to the characters, that give dimension to the believability to the possibility of the relationship and its continuance. (I’d pay attention to Mr Cotta and Ms Jackson [no relation]. Ms Jackson has already drawn focus with a wonderful edgy performance in STONING MARY, last year, at the Griffin.) {Look at the talent here and in THE PROMISE and see, with the right nurturing, Australia has some dynamic possibilities for the theatrical stage to come. Intelligence, dynamics and passionate skills.}

Ms Bates has not solved the problems of the space between the short scenes well enough, her clumsy solutions jolt us out of the rhythms of the writing, and the Set Design (Graham Maclean) serves, but, is, once again (STEEL MAGNOLIAS) terribly old fashioned in its solutions and execution- the painted seascape backdrop!!! .The Lighting Design (Matthew Marshall) is a support. No Sound Designer (as in the Ensemble’s THE LITTLE DOG LAUGHED) and it does demonstrate why and how this area of creative artistry has become as integral to the play going production and experience, as the other elements in 2009.

If you have missed this play and the performers you have missed ,in my estimation a very good, affirming night in the theatre. David Williamson is brilliantly, comically, acerbically, accurately back.

Posted by Pearly Productions at 8:06 PM