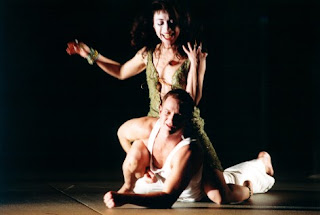 Last Saturday I had a truly wonderful experience in the theatre at Barrie Kosky’s POPPEA. After my disappointing experience with Mr Kosky’s THE WOMEN OF TROY last year, and on seeing the publicity images of the production of POPPEA I was very resistant to attending. I tried to attend earlier (a Wednesday) but the seats were not good. I returned, on Saturday, the last day, leaving it to fate as to whether I would get in to see it. Fate was good to me. More than GOOD. To paraphrase, slightly, the Director’s program note: Resistance gave way to interest, interest gave way to fascination, fascination gave way to delight, delight gave way to moved ecstasy. I can appreciate Barrie’s thrill “to be able to bring the show to Sydney” from the Vienna Schauspielhaus, because, it is a remarkable work.

This is Barrie Kosky’s POPPEA, for he has taken the last of Monteverdi’s operas, THE CORANATION OF POPPEA, which he much admires, re-configures it to suit his own philosophic and theatrical purposes for the present time and audience, and with a bold masterstroke, interpolated some sequences of a twentieth century composer, Cole Porter, into the score and action. The sheer effrontery of it is not new to Mr Kosky and even despite the success of such time-cultural interpolations in THE LAST ECHO and THE WOMEN OF TROY, here in POPPEA it seemed to me a flawless and inspired gesture. The sophistication of the choices of the Porter songs and the aptness of them, always fitted the state of the piece’s play when they occurred and enhanced and underlined the moments and statements with clarity and wit. The relative familiarity, for me, of the Porter in contrast to the Monteverdi (I had heard it and seen it but don’t really know it) helped me to relax and anticipate with an educating hand by Mr Kosky, using the Porter, to where I was emotionally and intellectually in his production’s journey. I felt comfortably “Clever” and such security did I have, that my objective brain was seduced into a deepening subjective state of delicate humanity and many times I was moved to cathartic tears. The amazing beauty of every theatrical element of the finale of Act One, capped by the still stage and then the very slowly descending curtain, held me in a wet faced thrall. The final music and vision of the final Act Two duet between Poppea and Nero was so transcendently breathtaking that it took me some moments to recover to applaud the performers.

Whatever the ‘sad’ but world-wise observations of mankind the work makes, the power of Amor, more than, momentarily, trumps it. The power of the Beauty of Art in Mr Kosky’s vision is both alarming and comforting, on removed time and place reflection. It is attractive and repulsive at the same time and is therefore powerfully fascinating.

The whole of this work from the Design: Set and Lighting, Michael Zerz; the Costume Design, Alfred Mayerhofer and the Director and Musical Directorship, Barrie Kosky (not only playing piano but percussion as well; bongo drums!!) is as one. From the anticipatory energy of Mr Kosky and his musicians; Aisha Buka, Linde Gansch, Jorg Ulrich Krah (celli), in the orchestra pit waiting to begin, to the first deeply emotive “noise” from the instruments, to the last sound and light and curtain cue, all is managed for the best affect.

Mr Kosky talks about the group of actors he had gathered around himself at the Vienna Schauspielhaus: “They could all act, sing and dance. My sort of actors.” The performers: Barbara Spitz (Amor), Martin Niedermair (Ottone), Melita Jurisic (Poppea), Kyrre Kvam (Nero), Beatrice Frey (Ottavia), Florian Carove (Seneca), Ruth Brauer- Kvam (Drusilla) have technical skills and a confidence-depth of expression that are inspiring to observe. The accuracy and crazy bravura in the action of the “acting” is startling to take in. The courage, daring and yet professional control is a wonder to perceive and receive. The joint visions are whole and exhilarating.

What I came to appreciate as I watched the performance and later cogitated over, was the reason Barrie Kosky wanted to bring this work to Sydney and why it was important to him. It seemed to me that these artists were equal and able to interpret and DO what Mr Kosky asked, naturally. The difference between his Australian work and this work, is maybe in the cultural differences in the mode of expression of the actors. I felt that the diverse imagery and wild discoveries of expression on this stage were coming from a deeply embedded internal life. They understood the style of expression. It is the way these actors naturally respond. So the bloody imagery, the sexual aggressions, the near nudity, the usual affronting gestures of the Kosky Oeuvre, and which began to bore me in THE WOMEN OF TROY, had a an authenticity and believability – a necessity, not a decorative or petulant "in-yer –face" statement. It appeared as an internal need and habit. Whereas, in my remembered experience of most of the Australian actors, is that they seem to wear the demands of Mr Kosky’s productions like an external costume. (Not all.) It is not a natural mode of expression for them, it is learnt, it is an acquired one and sometimes, for me, appears to be a style that is externalised like a costume or even parodied, sometimes appearing to be like a caricature, certainly not owned or authentic, as it appeared to me with this company. What this company has, was a "European" sensibility. Whether it is cultural or training or experience is of interest to tease out further.

POPPEA was made in 2003. So in Sydney- Australian cultural terms it came before THE LAST ECHO (2007),THE WOMEN OF TROY (2008) and THE TELL TALE HEART (2009). In my view POPPEA is the greatest of these works and experiences. It is also the oldest. Along with NO DICE, at the Sydney Festival, and WHEN THE RAIN STOPS FALLING, POPPEA has to be on the list of my favourite theatre experiences so far of 2009. Fate was Very, very good to me.