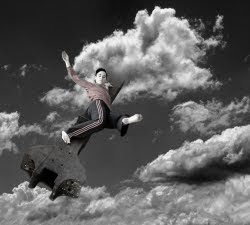 Two years ago De Quincey Co presented, as a site specific experience, a work called THE STIRRING. THE STIRRING had the audience travel around the then relatively “new” performance spaces of the CarriageWorks. In many beautiful and artfully designed and lit spaces,(Like the huge mound of steaming coal, or the deserted and decaying watch-shed beside the busy railway line lived in by a de Quincey dancer, with the clattering of the passing suburban trains lit inside with commuters, blissfully unaware of their performance contribution, moving through the landscape behind, as the sun set in the real universe from, the Earth’s perspective – magic!!!), dancers of the De Quincey Co interacted with the site for the audience. It was a beautiful experience and one timed by the audience, we chose where we were, what we saw, and for how long, all over the carriage works site, finishing ultimately, with all the audience and performers gathered around a fire, burning in a barrel, like a tribe of our primitive ancestors gathered for the warmth of this miracle of fire and the necessity of each other.

On one of the sites was a hung, gigantic piece of the old machinery, suspended on chains, that we all passed to reach destinations of the remnants of this building of another age and process, that could be swung, gently, by the passing parade of the audience, on its travels through the spaces. It is was the most inert of the opportunities of the event, and it was only with our tentative push that it came to life. However, the scale and danger of the piece was piercingly memorable. Man’s power was manifested in our fearful hands when we pushed it. It was truly “awesome” to behold and walk around and dodge, even though it could not harm us. The sense of the danger and the consequences to the human body if it decided to fall was pregnantly personal and it left an imprint in the memory.

In RUN, this new work with the De Quincey Co, the audience enters into a conventional seating, raked auditorium and are confronted by six or seven suspended pieces of huge, weighty, metal scaffolding or support pillars, possible relics of the site as it once was – a working carriage works for the NSW Railways. The back wall is a white scrim on which images of the dancers and the ‘sculptures’ are projected live (Video by Emanuella Prigioni), interacting with the huge shadows of the design elements (Rigging and engineering Design by Garnet Brownbill), (Lighting by Travis Hodgson) and the dancers. With a live score, played on this day, by Dale Gorfinkel and Peter Farrar (Jim Denley the sound originator being ill), consisting of ingenious found instruments - foam cups, toys etc held closely to micro-phones and ‘tortured’ and electronically enhanced, further accompanied by a saxophone manipulated and ‘played’ with, to create a most apt and haunting soundscape for the dancers and the thematics of the piece. (The digital media component, worked live by John Tonkin, screened on two screen combinations on either side of the front space, were peripherally interesting but not yet wholly integrated by the director into the piece).

This time, instead of the audience, as in THE STIRRING, travelling to the CarrigeWorks relics, the relics, now, collected and organised in this entrapped space present themselves to us.(The mountain as come to us.) They are statically hung in the air but then are moved and/or are swung around and through the space, and each accrues a personality and physical demeanour and identity unique to themselves. Even as they move, the sound of the tracks that they are hung from, the instruments which suspend them, when brought to life by the activities of the dancers, also, have their own voice. The weighted sound of the clack of the tracks, or the ratchet of the metronome swing of the gravity sprung swing of the pieces, at first disturbingly ominous, threatening, and then, in the case of the swinging metronomic pillar, the apparition in sound, of a gradual slowing of the clock as it unwinds to stillness or a journey to mortality: to a ‘death’, appears.

All of these relics of a great industrial time/age, once created and animated by man, then left to rust, decline to naught, albeit slowly, have been found, and now collected and hung and now brought back to life ,once again by man, but now in an awesome appreciation and in a perspective that is new and indeed redolent with admiration of the mightiness of what they once were. The De Quincey dancers, Tom Davies, Peter Fraser, Victoria Hunt and Linda Luke under the choreographic auspices of Tess de Quincey in the tradition of the Body Weather technique that the company has worked from and evolved, move around, and then, on, these great Props. They climb, drag, balance (magnificently precariously) around and on the objects of the history of an industrial heritage. Singly, in pairs, trio, and collectively they celebrate the interaction of the life force of man in interplays with their ancestor’s monstrous, at least in scale, and yet necessary creations and celebrate the physical autonomy and wonder of the human body as well. The odd movement expressions of these dancers emanating from their acquired traditions and interests are plastic in a way that the 'mechanistic objects' can’t. The very contrast enhances the wonder of each. Victoria Hunt, at the back in a wonderful costume of black tracksuit with a white stripe and little jacket and teased hair style – has all the sexual tension and presence of a Japanese manga figure - fascinating to behold; The 'animal' impersonations of the dancers across the floor at different times; the gravity defying ‘dance’ on the ladder, suspended in the front space of the audience eye line, while quoting from texts of maybe Wittgenstein and Anne Carson, grew in power through endurance not just in the athleticism, but, ultimately in an admiration of patterns and repeated gesture; the totally circus daring of the balance acts on the gigantic suspended ‘relics’; the final quartet of disciplined dance expression of the individuals and the collective on the floor, beneath the hanging tons of inert force, beautiful not only because of the aesthetics but also because of the dawning appreciation of the stamina of the company.

Maybe too long??!!! And certainly, my usual carp, that if you are going to use text (and why Not?) it requires as much rehearsal to communicate as the rest of the work. Maybe, more so, as this is not necessarily an oft use tool of expression by these artists.

The De Quincey Co once again takes charge of their practice and create a work that sits memorably in the psyche of the present age. The world and them the world and them and us. Inspiring and humbling for its ambition and near perfected achievement.