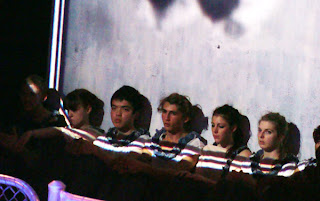 Shopfront has been a theatre organisation out in south-east Sydney, Carlton for a very long time. It works with young performers from very wide ranging backgrounds from the community. In the Shopfront Annual Report for 2008 there is an encouraging and amazing breadth of work that this company covered in that year. The major work was a site specific work in the shopping street/area of Hurstville called (lost toy story). (The photographs of the event look quite fun.) As well there was a project called ARTSLAB08 which “supports young and emerging artists as they realise their artistic project with Shopfront resources, support and networks.” There were Materclasses which that year hosted the physical theatre company Zen Zen Zo. RAW another series of workshops developing “short , sharp and bold!” projects under the guidance of professional mentors. A very comprehensive range of Community Projects are also listed. It’s a very impressive record of commitment. The premises have been spruced up and are very impressive as well. An enviable, versatile performance space plus other rooms for gallery/installation and dressing rooms etc. Under the guidance of Artistic Director/CEO: TJ Eckleberg and General Manager: Nerida Woods, their Staff and Board have quietly persisted and pursued work that is the essential foundation of the arts in this city. I have known about the company, but, shamefully, this was my first ever visit. I was invited and pursued and so went. The feel of the vibe was that of a youthful but just as sophisticated PERFORMANCE SPACE cutting edge.

SUPERPERFECT is a collaboration. The director of this project, TJ Eckleberg, in his program note, goes on to say “Superperfect is the culmination of over two years of scheming, plotting, planning, and dreaming – with very different organisations – an Australian multi- disciplinary contemporary arts centre for young people, a Japanese contemporary performance company and a Japanese university-along with youth services and organisations in the wider Sydney Metropolitan area…”

On arrival at the Shopfront venue there are a number installation works of varying interest on exhibition scattered about the foyer and in adjacent rooms. All the works have a youthful vibrancy and cheek. They all have a prominent sense of serious intent and accomplishment.

The performance takes place in a converted factory space, a long rectangular space. On entering we, first, are invited by the performers to write, simply on yellow Self-Stick note our wishes/dreams, which are then glued to the back wall. The performers then guide us to seating that has been organised in a traverse fashion – down to the two long sides. The main Set feature (Kate Davis) is a square wire pen of about hip height with four central gates. High above the stage area on a metal frame are suspended on wires at the entrance end of the space, spools of multi coloured ribbons and other materials across the width of the area. (Later they are unspooled for dramatic effect.) At both ends of the space there are octagonal screens on which video images of some of the performers in interview and a very varied set of collaged images, such as deer, birds patterns etc, are projected. (Another camera projected images onto the floor as well) (Visual Artists: Keisuke Takashi (NIBROLL) and David Kirkpatrick.) Lighting is by Stephen Hawker and is very useful and effective. The work is mostly a 55 minute choreographed exercise of teenage/youthful longings and needs; their wishes and dreams. The Movement/dance is the dominating feature although text is interpolated throughout. The words are either spoken through a micro-phone or delivered personally to the audience. This is the weakness of the piece at the moment, as the spoken words are not always clearly delivered to the audience, it is often blurred in under enunciated sounds and/or drowned in competition with the Sound design (Meem and Skank (NIBROLL). The music is always provocative and stimulating but not always in harmony with the communication of the text which appears to be spoken with a sense of ownership and urgency by the performers. The impressive work is the disciplined and committed physical work/choreography (Mikuni Yanaihara (NIBROLL; assisted by movement artists Victoria Hunt & Bronwyn Turnbull). In a large group of 21 artists and in sections of smaller combinations the physical execution and variety of expression has real impact. Along with props (a vast collection of clothing and photographic headshots of some of the artists for instance) the images are created and sustained with confidence, commitment and a sense of intellectual integrity. This is the greatest impression from the event – the sense of communal achievement in the enterprise of creative collaboration and discipline. The sense that the wide variety of backgrounds in the Australian contingent of the artists and the integration of the guests from Japan and their point of view have been each given respect and the breadth to be expressed and infused into a piece that speaks of the universality of being young no matter what the cultural background. Combined with the magically dreadful poetic expression of despair presented out at the Campbell Arts Centre not long ago: THE RIOT ACT, this work and the organisation Shopfront give pause to consider the importance of this kind of outreach/arts organisation in any community.

After the performance ,whilst waiting for friends to get a lift back to the city, I met several of the young performers. The level of confidence was self evident. One of the participants, recently arrived from Africa and only a member of the group since the end of May was apparently inspired with real confidence and a glowing sense of dignified self identity from this work and his participation in it. He has found a means to belong and yet be individually responsible for telling his story of immigration and integration into the society of Australia. What more could one ask of the arts. Self worth and a sense of direction. This performance was more than that. It had also artistic merit . Some of the company is travelling to Japan for performances later in the month. It is this international exchange that develops an important aspect of mutual cultural respect. The Lingalayan Dance Company and their collaboration with the Malayasian, Sutra Dance Company and their work RASA UNMASKED gave me that same sense of the value of the arts as a civilizing force to mutual understanding of nations. Shopfront has achieved much with this enterprise. Congratulations and the Arts Funding Bodies should take real pride and note well the worth of their support. More of it.

It's been a long time since I have been to Shopfront but your commentary and review made me think it was time I definitely should revisit. I was involved way back in history when Gary Fry and Errol Bray started the whole thing. You are right to say that organisations like Shopfront and their work are so important in connecting communities and nurturing confident and assured new and young theatre artists and performers. Your blog continues to play a very important and critical role of letting the world know there are so many other worlds to explore and to learn from.

Thank you so much for your honest review of our Superperfect performance in Sydney. I performed in the show, and also just returned from our brief season in Yokohama. It has been an amazing experience and it's exciting to hear people's personal responses.

Thank you also for your glowing support of Shopfront Theatre. It is a truely unique platform for young people that continues to blow me away, and it's reviews like yours that affirms my pride in our work.

Hope to see you at future shows,
Laura Carolan.