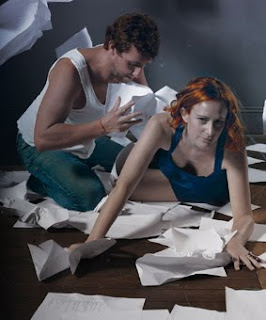 Robert Farquhar the writer of BAD JAZZ says he began with the title and then tried to find a play to fit it. On reading an article about a real actress and her explanation to her partner about the requirement of her, as an artist, to have a real act of fellatio with her fellow artist every night as part of her performance he had found an anchoring idea. (Real and Acting!!!!!! Where is the line? The dilemma of the actor and his relationships professionally and personally. The staged world and the real world!!!!! Which one am I in??? EHHHHHH???) Mr Farquhar, then, in response to attending a production of STITCHING by established writer Antony Neilson (See THE WONDERFUL WORLD OF DISSOCIA) and finding it to be “one of the silliest, most bourgeois evenings in a theatre I’ve ever been party to........ started writing the rest of the play (i.e. BAD JAZZ) as a sort of response to that theatrical experience.” Anthony Skuse in his program notes suggests that his last play choice at Darlinghurst Theatre: pool (no water) by Mark Ravenhill, “seems to be (the type of play Mr Farquhar) was railing against”. Mr Skuse, further says, that plays about theatre, “(have) distinguished antecedents: from Calderon’s GREAT THEATRE OF THE WORLD and Corneille’s THE THEATRICAL ILLUSION to Pirandello’s SIX CHARACTERS IN SEARCH OF AN AUTHOR and HENRY IV. These plays" Mr Skuse goes on, "all raise questions that transcend the immediate worlds of actors and the theatre..... (that) Farquhar’s contrapuntal writing style with its staccato rhythms and the heightened naturalism that slips into improvisation could wear either hats.” If only BAD JAZZ approached those quoted ideals.

Unfortunately, the experience of Mr Farquhar’s play, that I had last night, was that of an extended undergraduate revue sketch, both “funny and intelligent”, but, as time passed, progressively repetitive and especially tedious in its stretched final moments of grandiosity of insight. If only the play had the profundity of the above mentioned plays or any of the passion of say the films A DOUBLE LIFE with Ronald Coleman or Ang Lee’s disturbingly political, recent film LUST, CAUTION, that deal with the creative artists struggle to keep the objective brain in proper proportion to the subjective brain. That need, through craft, for a possession to seem to take place, rather than actually take place. For, if real possession does take place, maybe, you will land a radio/prop on the head of another actor and cancel a performance or you may strangle your leading actress or you may fall in love with your enemy. Mr Farquhar does not have that depth of concern. The dominant urge seems to be, to be funny, and to out play these other writer’s of his generation, maybe: Ravenhill, Marber, Crimp etc at their well received and respected work. BAD JAZZ clever as it is, is too long and fails to achieve that level of concerned artistry. It is ultimately shallow in its objectives. Who really cares about this artistic dilemma other than other artists? And in this play the only person that genuinely had my empathy was the non-theatrical one, Ben, the boyfriend. The rest of them seemed to be selfish, grossly immature and boring. Just like the characters in films like AMERICAN PIE and in almost any Adam Sandler oeuvre. (Silly and juvenile: sex and the instruments of sex as genuinely shocking experience. Oh, Really? A Dildo is still funny?)

What is terrific is the robust and theatrically inventive direction (Anthony Skuse) that keeps this play moving at a galloping pace and inspiring really outrageously brave performances from most of the actors. Remarkable work from Lisa Griffiths (Natasha), swiftly funny and always in the dangerous moment of discovery on stage. The performance has the presence to help you suspend your objections to the writing. Similarly, but less experienced, is the work of Anthony Di Placido (Danny). Ben Wood in the smaller responsibility as Ben, the boyfriend, is also an impressive and persuasive presence in his real world character. The direction of the play, however overall, tends to be raucous and often unnecessarily noisy in a “in-yer- face” kind of way. Maybe, now, old fashionably bourgeois. A kind of derriere-gard as opposed to avant-gard. What with most of the humour, both in the writing and stage imagery, tongue in cheek, but too often, perhaps, tongue in bum–cheeks. It takes a lot to shock us now-a-days. The control of all the elements do not always balance out and can be overwhelming in their effect. Distracting rather than complimenting. The sound (Jeremy Silver) just a little too deliberately noisy and uncomfortable. The lighting is excellent in its theatrical choices and theatre smartness, (the moving poles of spot lights for example.) The last time I was in this theatre (THE JUNGLE), I remarked that I thought it was a particularly difficult space to design for. The team of Brad Clark and Alex Sommer, seem to have made every difficulty an advantage in the conceptual design flow of the action of the play with just the right judgement of furniture or prop choice to reveal location and tell story. The costumes are an enormous success because I never noticed them as design.

If you have a penchant for a raucous, sex/bad language dilemma of the artist as person or character in the moment of creativity and the possible consequences of it then this production almost covers the difficulties of the writing. There are some good laughs but it does wear a bit thin as the night goes on. Some of you, like I, might believe it to be "one of the silliest, most bourgeois evenings in the theatre I’ve been party to" for some time.

Playing now until 12 September.
For more information or to book click here.
Posted by Pearly Productions at 4:38 PM