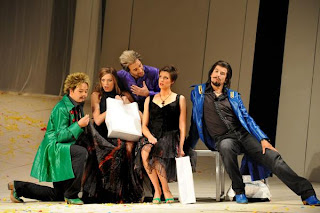 Cosi fan tutti (The School for Lovers) by Mozart and da Ponte, (English translation by Jeremy Sams) is Directed by Jim Sharman.

From the erudite notes in the Opera Australia program by Antony Ernst (2009) "The operas written by Mozart to the libretto by Lorenzo da Ponte are usually regarded as the pinnacle of operatic achievement... Certainly The Marriage of Figaro, Don Giovanni Figaro, and Cosi fan tutti are extraordinary... In Cosi, a puckish philosopher wagers two younger friends that their belief in the unconditional fidelity of their fiancées is unfounded. In a classically balanced charade he sets each to wooing the other’s lady, using methods which are quite emotionally unscrupulous. When the young men succeed, he calls time on the charade, leaving the couples to contemplate what they may or may not have proven about themselves and each other. At the heart of the opera lies the fact that it deals with the personal moral sphere and the nature of happiness and attraction. It’s a theme which strikes very deeply into what people believe about themselves and each other, at what they’d like to believe and what they fear. Romantic comedies are so popular because they reassure these fears – they assuage loneliness, doubt and misunderstanding. Cosi raises the spectre of all three...... Since it was written however, audiences, performers and directors alike have often struggled with Cosi’s very simple proposition of established relationships.... that it is possible to be in love with someone, attracted to someone else and to act upon that attraction."

Under the guidance of Conductor Simon Hewett the speed of the overture is a pell mell chase that is breathlessly exciting. The Singing from the six principals is, from my experience of opera going, very good. Tiffany Speight (Despina), Sian Pendry (Dorabella) Rachelle Durkin (Fiordiligi), Jose Carbo (Don Alfonso), Shane Lowrencev (Guglielmo) and Henry Choo (Ferrando). All of the singers have the youthful élan and support of the conductor to do almost everything that the director envisages and still sing well. Henry Choo is especially pleasing in his beautiful elegiac solos. Enchanting.

Listening to Jim Sharman on the Radio National Music Show the other Saturday morning he talked of rescuing the Opera from the overburdening traditions of the Vienna eighteenth century kitsch traditions that have weighed the opera down, in his opinion, in accessibility around the world throughout the ages. Unfortunately it seems to me that Mr Sharman has simply removed one kind of burdening for another. His intellectual thoughtfulness has resulted in a cogitation of the opera that is expressed with many offers of artistic flourish that flatly seems to state that, despite what Mr Sharman says, he simply does not trust the genius of Mozart’s score or da Ponte’s libretto (Jeremy Sams).

At almost every opportunity the set, costumes, video production, lighting or the choreographic movement of the singers is engaged in attempting to explain or keep us entertained or spoon fed with a very educated deconstruction of the meaning of the piece. It is a baffling calamity of business. For example two enormous nearly opaque curtains are dragged open and shut interminably throughout the very long evening - especially the back one. Just what is the why or wherefore of the activity and the raison d’être of the cueing of the action , a white suited gentleman or woman walking the curtains, is beyond me and so wearying that I was prepared to hire a hit man from the Underbelly world of Sydney to stop it. How many times? (The actor at the back was certainly the busiest member of the cast.)

The wedding conceit to bookend the piece and then a procession of guests that silently intrude as witnesses around a wedding table all night, seemed paltry and mindlessly tedious in its celebration; the simply over gratuitous presence of a bizarre "garden" of costumed chorus to impersonate flowers, for instance, in the second act, presented a surreal brain teaser: What is it? What are they? Were they necessary? (Besides what did that 2 or 3 minute entrance - exit cost?) I was told what they were post performance. The gaudy-jokey costumes and lame business e.g. the gym training session of the opening of the opera; the daringly unflattering swimming costumes of the two female leads on sun lounges, the many coloured collections of mounds of confetti that served theatrically many different services for the singers: water, magic potions etc; to be topped by a very busy live video broadcast on to the back curtain wall during the singing, grossly magnified to gargantuan size the tonsils and other features of the singers; overburdened the opera with so much distraction that one longed for the quite elegant, classically respectful, deeply moving simpleness of the old Goran Jarvefelt and Carl Oberle production that used to be in the repertory.

That was my first experience of the opera and I can remember the dignity of the human experiment and lessons that Mozart and da Ponte gave us without any of the clutter of the overly detailed febrile interpretations of almost every moment of the opera that Mr Sharman has invented for us. Just let them stand there and sing and act beautifully. The Opera and its impact was in the simple unencumbered expression of the truth of the human dilemma of the seeming rivalry of love and lust, greatly moving and greatly overwhelming. I remember the piercing beauty of the simple but heightened intelligence of the production with great clarity. The Opera can work. It does not need the tricks or whims of this tiresome production. By the end of the night, or really well before it was near ending, Mr Sharman and his artistic team had given us so much to deal with that intellectually and sensationally we were drunk and almost at the point of unconsciousness. So busy is this work that Mozart does not survive. The ‘buffo’ of it is overwrought and not able to sustain us as entertainment even.

This opera is considered as one of "the pinnacles of operatic achievement". This is hardly discernible in this production by Mr Sharman, that seems to want to bury the work with the stamp of the artistic interpreters. It like the taxing production of last year’s Handel opera ORLANDO, it suffers from the heavy hand of a director’s and designer’s vision. The music is secondary to the effort. Fortunately the conductor Simon Hewett is strong enough in his contribution to give some pleasure.

Playing now until 29 October.
For more information or to book click here.
Posted by Pearly Productions at 11:52 PM