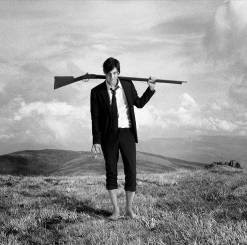 Arts Asia Pacific in association with B Sharp present THE LONESOME WEST BY Martin McDonagh at the Belvoir St Downstairs Theatre.

Martin McDonagh an English/Irish playwright has been a darling of the theatre going public for some time now. THE BEAUTY QUEEN OF LEENANE, A SKULL OF CONNEMARA, THE CRIPPLE OF INISHMAAN, THE LIEUTENANT OF INISHMORE and last year, upstairs at Belvoir, THE PILLOWMAN, have had successful airings and even revivals in the Sydney Theatre landscape. This is the first time that I have seen THE LONESOME WEST.

It has all the hallmark attractions of this writer. Well written characters in extreme, exaggerated melodramatic situations of personal rivalries - sometimes politically motivated, that erupt in outrageous, audacious conversations and juxtapositions of dramatic needs, with a tension of the unpredictable possibility of violence, ever present and evolving, ratcheting up insidiously, sometimes to explosions of real horror or devolving into relief making restraints. Very Hitchcock, and very, very Tarantino. (See INGLOURIOUS BASTERDS or even McDonagh’s own recent film, IN BRUGES to see the expert comic/fear dimensions of the work as writers and directors.)

This production is directed by Peter Carstairs, a film maker, who is making his debut as a theatre director. Mr Carstairs’ film, SEPTEMBER, completed in 2007 (both writer and director) had a brief appearance on the Australian screen. I really liked it. Dealing with the racism of a past era in the state of Western Australia, it was told gently with elegiac and atmospheric images with the sense of Chekhov observations and pacing and gentle almost uneventful narrative turns. The film maker Terence Mallick was brought to mind as a possible influence. Beautiful, slow exposures to landscape and contrasted fixtures, whether houses, vehicles or people, in it. The pacing of this play production is slow and unfortunately consistent in its rhythmic scoring. The conversations are naturalistic and mostly plotted with “long” expositions of pausal motivations by the actors, sitting in an Art Director’s physicality. It has, for my experience in the theatre, the same expositional skills of Mr Carstairs’ material in the rendering of SEPTEMBER. A Chekhovian effect. Maybe, a more contrasted variation of pace in the different episodes would have had me more riveted to the situation. The pacing became becalming and too predictable. The look: romantic impoverishment.

On the front page of the program there is a quote from a review of an English production from The Sunday Times: “....brutal and savagely funny.” The story concerns the sibling rivalry of two bored and unmotivated young men in a boring village that has a history of murder and suicide. (The television series Midsomer Murders has a record, similar, of murderous actions.) If these two siblings, now adults, at least in age, are typical of the village, the statistics of the deaths in this locality is understandable. The portrayal of the two brothers, in this production, Coleman (Toby Schmitz) and Valene (Travis Cotton) however, hardly have the energetic possibility, within the directorial boundaries of the pacing, of BRUTAL or SAVAGE, rather, my impression was PETULANT and CHILDISH. Funny they still certainly were, for Mr McDonagh has a very adept skill which is almost fool proof in delivering the laughs. We certainly laughed. But the inherent violence of the situation was under cooked and the gathering, prescient dangers of the hostility between the brothers never really moved into a place that one can believe will result in bloody mayhem. It is just a silly childish game of dare with the consequences been predictably defused. Coleman does not at all look and feel psychopathic. And Valene does not ever appear to be an equal to the possibility of violence that his brother, textually has. The subplot between the priest, Father Welsh (Ryan Johnson) and Girleen (Sibylla Budd) is also underplayed.

Toby Schmitz, within the limitations of what I think is the direction is, as always, impressive, if not appearing a little tired. Travis Cotton is too often aware of the comic possibilities of this character’s situation and tends to reach, knowingly, for laughter rather than the truth of the bitter rivalry, and so defuses belief of the central conflict and the possibility of danger. Ryan Johnson has deeply felt intimations to the tragedy of his character but not the sophisticated expressive skills to deliver them accurately for audience clarity, for endowing and empathising. The expressionistic clues he gives us are too small, almost cinematic in their expression. The best performance comes from Sibylla Budd, who utterly transforms herself, with the assistance of heavy eye-liner make up (I did notice she had removed it for the curtain call, and the contrast of character, beside the magic of the character energy she had summoned to embody the poor pathetic, yearning Gileen, was palpable. There was Ms Budd taking a curtain call for the work of Girleen.)

Jacob Nash, Set Designer, has, with his usual eye for the essential details, presented a design solution that is impressive but also with a finesse of a fashionably distressed look dominated by a huge crucifix that has the possibility to be bought as an object of Art. There is no sense of the misery of the reality of this miserable environment that the characters inhabit, that, maybe, part of the influence of depression and hopelessness of the boys and community of this village in the lonesome west of Ireland, but rather an attractive advertising art design for a jean commercial say, Diesel. Look at the street magazine VICE MAGAZINE for the trend. Interestingly the film director, Terence Mallick, whom I associate with the work of Mr Carstairs in his film SEPTEMBER was also a prolific TV commercial maker.) The Lighting Design (Sian James-Holland) is sufficient and the Sound Design and Composition by Geoffrey Russell is effective and in its brevity, beautiful. The opening sound promised more than what was delivered in the production. Entrancing and atmospheric.

Most of the audience had a very funny time, but I did feel that only half of the possibility of the play was delivered. It seems to me that the Australian productions of most of Mr McDonagh’s work that I have seen, seem to emphasise his Irish characters as stock theatrical comic creations, instead of the ugly, fierce and unpredictably dangerous “folks” of their history. Study IN BRUGES and see McDonagh’s intent. It is hilariously funny but also politically wise in its tough observation of a culture that is self perpetuating in its own violent self destruction. It is hilarious but also senseless behaviour. This is why Mr McDonagh is revered. He has written a new play that will soon premiere in New York. I had feared that we had lost him to the cinema. But he will be back. I hope that whoever presents the next work goes beyond the Henry Lawson vision of the larky Irish character and goes beneath to the subterranean concerns of the writer.

Your blog keeps getting better and better! Your older articles are not as good as newer ones you have a lot more creativity and originality now keep it up!