one long night in the land of Nod 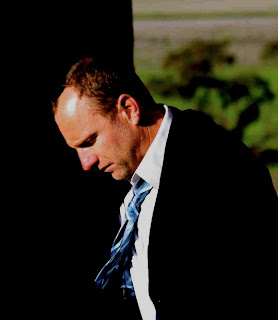 floogle in association with The Tamarama Rock Surfers presents ONE LONG NIGHT IN THE LAND OF NOD at the Old Fitzroy.

This is the second play by Duncan Graham that we have seen in Sydney this year. The first was OLLIE AND THE MINOTAUR (2008) at the Downstairs Belvoir. This is a short, one hour, one act play concerned with sibling rivalry (See THE LONESOME WEST) between brothers Aaron (Patrick Graham) and Kane (Chris Pitman), set on some crumbling family ‘farm’. The two brothers are at opposite poles of sophistication and needs. Kane is a university trained business man, Aaron is the stay at home and intellectually less astute brother, prone to emotionally driven acts of violence. The drama between them is intense and harnessed and endured only by their blood relationship. It ultimately concerns the inheritance of property and murder. Familiar territory and themes.

The Director, Iain Sinclair, has elicited very visceral and highly committed, full throttle testosterone charged performances from both these actors. The energy between these actors, contained within the small space of the Old Fitzroy, can sometimes be felt, in the auditorium, as a kind of assault. The pace of the exchanges are powerful and overlap at bewildering speeds and then are contrasted, nicely, with some quieter introspective moments. (The writer, Duncan Graham is very even handed with the textual responsibilities, even, giving each character a monologual opportunity of reflection or expiation of history [a moment to act, for each of the actors, the justification of characters actions or provide an insight into character motivation - you know, those Academy Award kind of Speech moments.) The acting, although admirable for the technical virtuosity, sometimes floats on the superficial effect of forceful energy and too often making it a substitute for interior depth. A pause, a breath, a thought, an opportunity for the audience to endow a clue to the meanings "under the line", or on the syntax, as well as on "top of the line" would have helped a better attachment to character and narrative for my experience.

[Giving the characters names like Aaron and Kane, the writer seems to be reaching to some deeper mythical level of universality. My cultural references were that Cain (same sound as Kane) was the first murderer i.e. the murderer of his brother Abel.) Yet, in this play it is Aaron that takes that role on in the function of the play, so, I was distracted in trying to sort out the red-herring of the writer in his character’s nomenclature. Aaron, is essentially a brother to Moses and a side kick to him and not demarcated in a very dramatically clear way in the bible and certainly has no connection to Cain. It was de-railing and ultimately not important.]

The play written in 2005, has the feel of the territory and energies of a Sam Shepard experience- brotherly rivalry and identifications. (CURSE OF THE STARVING CLASS; BURIED CHILD; TRUE WEST; A LIE OF THE MIND) The dialogue structures and issues similar in their reaching. But what Shepard has in his “sibling plays” (All his plays) is also black humour that helps the bearing and suspension of the inherent dramatic ploys and tensions. The comedy defuses the tensions and helps the ratcheting of it up, over the performance, in those plays, it takes away the predictability of it - it surprises us - those plays have edge. (Eugene O’Neil does not have the comedy but has a better grasp of his mythical usage in the revelations of his characters over the playing time of the play (DESIRE UNDER THE ELMS, for instance). Mr Graham’s play lacks either of those tools and so it becomes a little relentless and far too predictable to sustain, even over this short length, without longueurs. The play shows the promise of the writer and with experience and dramaturgical strengthening Mr Graham could evolve into a writer of some interest with his obvious gift of the Australian vernacular - that clear, if not consistently obscene, Aussie voice. (“Fuck, fuck fuck” - nearly as many per page as THE WIRE, now being screened on ABC TV I suspect.)

The Design by Victoria Lamb, a mixture between real kitchen surrounded by an impressionistic "rabbit proof fence" creates with the lighting (Matt Cox) a very imaginative space for the play to work in – certainly for the audience and I presume the actors. The Sound Design is very direct and little to simplistic in its decisions. The long odd sounds evolving into a Gothic like scream a little to clichéd and do not measure up to the other design elements.

A play that reveals promise but, for me, too relentless in its methods.

Playing now until 3 October.
For more information or to book click here.
Posted by Pearly Productions at 3:59 PM