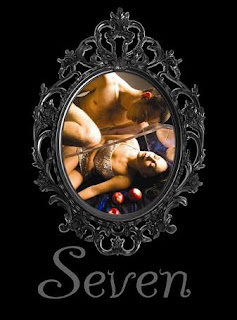 "Leigh Warren is a choreographer and Artistic Director of multi award winning contemporary dance company Leigh Warren & Dancers." Mr Warren in his program note writes of his work SEVEN: "Working with writers has been very rewarding and brought a fresh new impetus to both the creation and performance of this piece. While the narrative of Snow White has provided the framework for the choreography, it is the personalities of the dwarfs, their relationships, their points of view and how they relate to one another in this extreme family situation, that I am exploring. I begin by introducing them as they morph from dwarf to frog to human to happy ever after, it is the subject of love’s labyrinth that has been the driving force behind each scene… (a list of some 16 scenes)… Love has been described as many things but whatever it may be, it appears to ebb and flow like the tides. It is a state of being and depending on your orientation, triggered by an individual sense of beauty or pheromone response – invisible, in comprehensible – which is what makes it so fascinating to us all.”

How all these ideas coalesce, for an audience, in this dance is the problem. It is not communicated in any clear manner. The conceptual dramaturgy of this piece is, I believe, sprawling and flawed. The artistic tools and judgements in the creation is just as jumbled as the artistic objectives of the dramaturgy. The set design (Dan Potra) of a divided, smashed and jagged mirror, surrounded by a white, plastic bevelled frame, internally lit by florescent tubes, split, across the back of the dance space like book frames, with a drooping ragged creased cloth, on which live video of the dancers is projected, interpolated with filmed sequences of actors being the “face of the mirror’” (Mirror, Mirror on the wall…Etc.) hung between. The floor is a scratch patterned image, subject to colour alterations, mostly light green is a dominating image in the steeply raked auditorium. (The Lighting & video designer, Nic Mollison). {The Lighting of the dancers the most successful element of the event.} It becomes a feature that ultimately is dispiriting to constantly ’deal with’ aesthetically. There are seven miniature beds spread about the space, each with a dreary tube of light hanging above them, lit, seemingly at whim, which lift into the air dripping with what could be either branches, weeds or moss when suspended. (They make several take-offs and landings.) The dancers in green ‘hoodies’ decorated with fringing or patches, enter, like a caterpillar, all bent at the waist and leaning on each other: 14 legs (and 14 arms!!!!!) These “hoodies’ are later removed, but the costumes of individual contemporary urban wear and grunge that are revealed are not very inspiring to look at. (Original Costumier; India Flint; additional costumes Leigh Warren.)

The choreography of these dancers both in concert and in varying groupings of solo, duet and trio, seem to spring from the boundaries of the dancers and are subsequently, very limited in their expression, although within this limitation competent. The feel is of a dance school’s graduation concert. It is very boring to watch over the playing time of 1 hour and 5 minutes. Repetitive and dull.

Accompanying and interspersed in the dance, the performers are required to mime pre-recorded dialogue of the most banal observations [it seems of their own], tedious to take in and hindered, particularly, by a recording standard that sounds if it has been recorded in somebody’s bathroom. (Probably the dance studio??) The sound is often inaudible and the voice/sounds have not been adjusted technically. (Voice Overs: Craig Behenna and Hew Parham.) As well, sadly, the performers have not had much, if any, direction in the dramatic communication of their verbal responses. It is a jumble of noise and verbal clarity, and whatever the weight of the voice over component to the success of the communication of the thematics of the conception, they are virtually a lost cause in performance. The music is mostly simple and mindless background (Composers Ian Moorhead and Adam Synott in association with Sacha Budinski) and apart from an uncredited series of American croon tunes, (which because of the professional recording values evident in hearing, highlights with unflattering comparison the sound production values of the Voice Over material) accompanying several of the danced scenes, is not a very useful or enlightening source to the comprehension of the piece. [Some text for the performance has been drawn from the play SPEAKING IN TONGUES and the film LANTANA by Andrew Bovell. (The only song credited, there were many more: IT NEVER ENTERED MY MIND (Rodgers and Hart) used by permission of Warner/Chappell Music Australia Pty Ltd.]

In a week that begins the Sydney Opera House’s SPRING DANCE program, it was not a very auspicious introduction to the Leigh Warren & Dancers. Extremely, extremely disappointing.

For more information click here.
Posted by Pearly Productions at 1:59 AM