This Kind of Ruckus 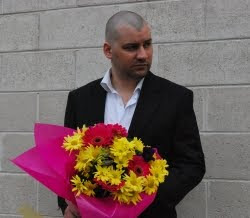 Performance Space and version 1.0 present THIS KIND OF RUCKUS in Bay 20 at CarriageWorks.

In the program notes David Williams, Chief Executive Officer of version 1.0, Producer of this performance, one of the devisers and actual performers tells us “THIS KIND OF RUCKUS is a performance about power, control and violence in intimate relationships. The work explores sexual violence in a range of spheres – from the realm of the domestic, to the judicial system, to the media and popular cultural attitudes, to the recent spate of sexual assault scandals in the sporting arena.” It could be a forbidding engagement in the theatre, however, as difficult and as dark as this material may be, the work presented is intriguing, engrossing and demonstrates more than admirably, version 1.0’s objective, which is to present “innovative political performance.”

Five performers: Danielle Antaki, Arky Michael, Jane Phegan, Kym Vercoe, and David Williams separately enter the space in front of a black curtain and each characteristically, idiosyncratically strike a pose with red, paper pom-poms like a chorus of cheer leaders. After a whispered count of three, they choreographically spin into a synchronised seated position and one of the company (Kym Vercoe) begins a frightening narrative, re-calling, the events of two women, who, in the course of one hot summer night in Sydney, find themselves in the middle of two different ‘rescues’ of two other women in the midst of dangerous, aggressive street violence. The twists and turns of the story are excruciating in both the cliché and then surprises, ending with the police leaning in on them through the front window of their car, in a subliminally (or not) intimidating manner, recognisable to all of us citizens as a familiar scenario (either from real life memory, [heaven help us] or our fictional take-in of popular television available almost every night, and film stories), and toying with the possibility of the endangerment of their own personal freedom as a consequence of their act of good samaritanism. To intervene, twice foolish!!!! Ms Vercoe is a consummate story teller and the vocal and physical commitment to every detail of her monologue is brilliant in a shimmering charge of focused energy. There is no way that any of us in the audience can be distracted from her vivid telling. It seizes one by the scruff of one’s bourgeois complacency as a theatre goer having just sat in my seat after a drink and casual chat with friends about the inanities of one’s day and urges, demands attention from us to an area of societal behaviour that is often pushed, uncomfortably, away by us, to the consciousness of the social worker or police. With this means, the company has us in a mesmerized spell of acute attention.

The curtain retracts and reveals a silver, perforated wall of square patterns, echoed in the floor in front of it, bordered by the black and yellow tape of a recognisable code demarcating ‘incident’, that warns us that this is a crime scene. On this crime scene floor various scenarios, illustrating the subject matter, outlined above, take place. On either side of the space stand two large tables burdened in an uncountable number of glasses and cans of alcohol, and a garbage receptacle to collect the swiftly emptied containers. The performers using a variety of performance techniques: dance, repeated physical gestures, text – both monologue and interactive duologues, example the myriad of instances of the cultural possibilities of the eruption of violent behaviour. The writing in THIS KIND OF RUCKUS is even handed. Neither sex dominates as victim or predator. As well, the physical abuse is just as well balanced with the preponderance of the more subtle psychological abuse. The exampled scenario between a male and female partnership undergoing a therapy session, is wonderfully, politically and deftly constructed to shift the empathies of the audience from one of the participants to the other. The cycle of cause and affect and the dreadful pattern of the behaviour is underlined in a brilliantly slow-burn kind of way. The attempts to expose the motivations of the perpetrators and victims are tantalising and confronting in their details.

Above the performers on a large screen, video images, some pre-filmed and reproduced are intermixed with projected live action both in real time and delayed time, sometimes slow-motion images. In black and white, sometimes veiled through a red filter passing across the pictures, the images are startling, and from where I sat, never distracting, but always, when I chose to look, connected to the action of the performers. Sean Bacon is the Video Artist and this work adds to an impressive artistic input to other work of his that I have seen here at performance space (THE BLAND PROJECT). Accompanied by a dynamically ‘pumping’ sound design by Gail Priest all of the ingredients of this performance are tremendously effective. The aesthetics in the method of performance never overrides the political intent of the piece. All the choices both dramaturgically and artistically are of a whole. The work itself and the performance carries some whack. It is hard not to be awakened to a very acute dilemma in our civilized culture. Ironic, isn’t it? that the theatrical event of the year opened this same week at the Sydney Theatre Company A STREETCAR NAMED DESIRE. A play that deals with physical and psychological abuse of the most violent kind, ending in rape and mental illness, albeit in the most poetic of writing. Alongside each other these two theatrical events sit dramatically as observations of our inherent human nature and our complicit behaviour in its continuance.

David Williams brings up the relevancy of the examination of the subject matter in his program notes: “Didn’t ‘70’s feminist theatre comprehensively address sexual violence? Does this work need to be revisited by version 1.0?” and then answers it himself, “Looking in the newspaper on a daily basis, with the ever-multiplying number of awful events, has demonstrated the urgent need for performance to return to these themes.” Mr Williams believes “That our performance works opens up spaces for public conversation, and hope(s) that you will join us for a conversation in the foyer after the show.” Unfortunately he suggests that that conversation should “preferably (happen) after a strong drink or two.” After the visible insidious influence that alcohol has on the behaviour we have just observed it was not a very healthy or sensible urging. Maybe the Influence of that legal drug, alcohol, should be the next subject examined by this excellent company of politically charged artists. Our animal genetic structures, as Mr Darwin demonstrated, evolves not revolutionises. It evolves very, very slowly.

Paul Vautin: Alright mate, well said. Alright,let’s get on with the show.

The football codes have moved on into the final competition phase – I hope you all enjoy them!!!! If you are not interested in the sport of it all, then, I recommend the performance space and version 1.0 production of THIS KIND OF RUCKUS.

Playing now until 12 September.
For more information or to book click here.
Posted by Pearly Productions at 10:44 PM