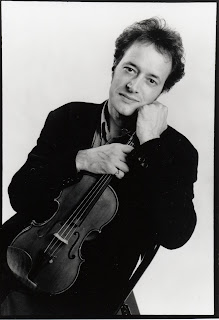 Guest Director, Anthony Marwood, of the Australian Chamber Orchestra, has chosen a very exciting program ranging form Mozart’s (1776) and Mendelssohn’s (1822-1824) work to contemporary compositions by Golijov, Kinsella, Vine and a recently commissioned Transcription of Schumann’s Cello Concerto in A minor for Violin by Orlando Jopling. The music choices span history and the principal effect is one of joy ,surprise, apprised virtuosity, of both The Orchestra and Mr Marwood, and an elegant statement about the timelessness of good music, well played.

The program notes tell us “Mozart insured himself against the excessive reverence of posterity by seeing to it that we could never take him entirely seriously. Just when we’re standing in awe of his sublime genius, he turns around to reveal his whimsical sense of humour.” The Serenade in D major, K239, Serenata notturna , composed in 1776 –two years before the Colony of Sydney was founded - begins in fairly recognisable Mozartian form, with “a majestic march (setting) up the usual instrumental texture over simple harmonies”. The second movement the Menuetto similarly is joyfully "full of high spirits and exuberant charm.... He darts between different characters, from a mock heroic Adagio in the Baroque manner to vigorous country dance tunes; high art, low art." Mozart decrees a "dramatic pause" and in this contemporary rendering the soloists of the quartet, Anthony Marwood, Helena Rathbone, Christopher Moore and Maxime Bibeau, are given opportunity to improvise. The cheeky one-upmanship of the performers, especially the wry humour of Mr Moore, caused a great deal of pleasure and laughter. There then followed a drum solo (Brian Nixon) and it too gives a further audacious tone to the event and the sunshine of the youthful Mozart delighting in shocking and playing with the expectations of his audience sprang the performance into good humoured expectation. The playing was delightful.

The next piece was an Australian premiere of Irish composer John Kinsella’s Prelude and Toccata for string orchestra. It is "a dazzling, virtuoso piece;" apparently "extremely difficult technically." Anthony Marwood tells us: "It’s very fast, kind of whispering, flying around the instruments in the most spectacular way, but because it is hushed and whispered it has an intoxicating effect. By no means is it all quiet…" The orchestrated arrangement is very theatrically thrilling to observe and the vivacity and the obvious technical feats that are being executed are breathtakingly admirable. The challenge is great and the Chamber Orchestra responded vividly and sonically, brilliantly. (The score has a kind of a visual journey because of the intriguing combinations of sounds and speeds that suggest a Hitchcock film, it is very tantalising to hear.) Again great fun.

There followed the Mendelssohn String Symphony [Sinfonia] No. 12 in G minor. For family home performances Mendelssohn was encouraged by his father to compose and between 1822 and 1824 he composed 13 sinfonias. "(And) while these works remained practically unknown until relatively recently, they display the emerging voice of the brilliant 14-year-old composer." The shock for the journey-man in music experience, like myself, is that the Mozart piece was composed by him at the age of 20 and this very vigorous Sinfonia by a 14-year-old!!!!! I am flabbergasted with awe and wonder. And a great deal of envy. I never did conquer the recorder and I gave up the guitar fairly quickly. (Just too much practice was needed.)

After the interval we heard a short piece, commissioned for the celebration of the Richard Tognetti 20th Anniversary leadership of the Orchestra, called XX. by Carl Vine.

Next, Robert Schumann’s Violin Concerto in A minor (after Schumann’s own transcription of his Cello Concerto in A minor, Op.129; arranged for violin, strings and timpani by Orlando Jopling.) Orlando Jopling’s arrangement of Schumann’s Cello Concerto was commissioned by Anthony Marwood , the Irish Chamber Orchestra and the Australian Chamber Orchestra, and premiered by the ICO, with Marwood as soloist, in April 2009.This is the piece that we have been waiting for. Mr Marwood gives an exacting and brilliant performance of the thrilling demands of the composition. Mr Marwood becomes possessed by the music and transforms physically, in front of our eyes, immersed in every pulsing, gliding, piercingly beautiful challenge. It is a magic thing to watch and hear. One is swept away with the intense virtuosity and spirit of a musician who is not just playing the music but is embodied by it. The Aco was transported as well into inspired support.

The final work Last Round (1996) by Osvaldo Goljov is in honour of the memory of Astor Piazzolla, the last great tango composer. The passion and deliberate chaos of noise and rhythm capture the sexual dilemmas of the culture of Argentina. It is an interesting after thought to the concert, oddly, a cooler of the temperature of the night so afr.. After the stratospheric travel in the Schumann, one needed an earthing interlude before exiting the Hall into the real world. At least I did.

The programming once again was provocative, delightful and extending. I had a great time.

For more information click here.
Posted by Pearly Productions at 12:11 AM