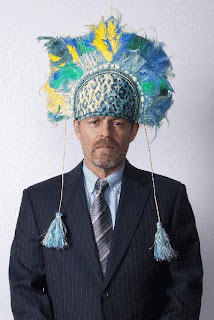 Spiky Red Things and the Griffin Independent present UNDER ICE by Falk Richter. Translated by David Tushingham at the SBW Stables Theatre.

UNDER ICE was written by Falk Richter (and translated by David Tushingham) in 2004 (and) “is the second play of a four-part play cycle by Falk Richter titled THE SYSTEM: [Electronic City (2002); Seven Seconds/In God We Trust (2003); Hotel Palestine.]. His inspiration for the cycle came in response to Germany’s chancellor Schrooder, justifying his support for the war in Afghanistan by saying, "We are defending our way of living there in this war." So Richter began to ask questions; What actually is our way of living, how do we organize our lives in the West, what are our ethics, our beliefs, how do we think we achieve happiness, how do we structure our work, our market, and our media – and why do we need to defend it by waging war against Afghanistan?” (from program Notes.)

In UNDER ICE, as part of the quartet of THE SYSTEM, Richter looks at “the ideology of the business world’ as he believes that “it is becoming the main ideological force of Western society….. (and that he) was observing how everybody in every part of our society (also in the arts and theatre) is shaping their lives according to this idea of the market and efficiency…”

This is a powerfully written piece; the translation has power the power of a translated language in poetry – it is riveting; all the performances Terry Serio, Jason Langley, Adam Booth and a cameo appearance by a young boy/actor Paris Change are mostly amazing for their committed clarity and skillful use of the technical crafts of the actor; the beautiful black and silver/grey Design of Melanie Paul (also the costuming); a truly clever and integrated Sound design and Composition (extremely sensitive to the moments of the play) by Rosie Chase; extraordinarily sensitive and supporting Digital Design by Mathew Mackereth (a narrow twin sided video screen, high above the action of the actors with a constant intriguing pattern of real letters and visual abstractions in hues of black, grey and white); and a supporting and non-distracting Lighting Design by Nicholas Higgins; and a complex and imaginative choreographic sequence by Craig Maguire, especially in such a small space. The Director Kellie Mackereth is master/mistress of all of these impeccable elements, for which she is the originator of choice and the guiding hand, as director, and has a fine eye for the nuanced details of the text and attempts to solve the stylistic problems of the “form” of the writing with brio and intelligence.

I found the experiencing of the play as theatre frustrating, exhausting and often irritating. Three men have interspersed monologues which they talk/lecture to the audience. There is no interaction between the characters. It is just them and us. It felt as if I was been given a didactic lecture from a very intelligent point of view (one which I agree with by the way - especially considering the hostile environment that the Arts exist in general in this country since the Dawkins Report in 1988, and recently, more obviously, the hostile battle of the practice based/vocational training courses (e.g.; UWS, VCA two of many) and their struggle to fit into a University Corporate Model that does not seem to really know, or if they do, understand, the intricacies of the historically founded and proven methods of teaching and the nurturing and incubated patterns of varying growths of development of the young artists in their care. {A recognised world wide experience of practice.} The promise of outcomes and outputs are hard to predict and require enormous trust and patience to be forthcoming. The ability to fail gloriously respected as part of the process towards outcomes. Corporate Models seem to demand clear and unequivocal deadlines to justify the efficacy of the money spent. Factory results on factory trajectories or bye-bye student, staff, course, institution. “Shaping their lives according to this idea of the market and efficiency.” The continued cry that the Arts can’t seem, or see the need, to change their habits. Rather it could be put that the Corporations and/or Economic Rationalists of Governments are unable to value or change their system to embrace the most human of endeavours- the chronicling of the issues of civilizations.). [Excuse the rant!!!?] What I longed for was a G.B. Shaw or a Brechtian or Barker or even a Hare debate (when they are writing at their best) within the construction of character, possibly plot/narrative and especially humour that could humanise the play’s pre-occupations in an easier form.

The sense that we as a culture have moved to create a world where the corporatizing and commodifying of our institutions that have a gleaming, 'sexy' exterior, harnessed to profit and efficiency as model representations to the world as success, at the expense of the respect and regard of the human element is frightening in the perceptible truth of it around us today. The vision of a man having the dream/vision of a car and television moving through the landscape on a date, while the human, who created the world, (Frankenstein) watches from the inside, forcing him to jump through the gleaming, sexy, well spun glass box, in protest or need to stay sane, from a twenty story building, screaming in space, where no-one will hear, to land under ice, is a pathetic and desperate reality for some of us. It reminds you of the horrible nightmare of the struggle between man kind and the computer Hal in Kubrick’s SPACE ODYSSEY, 2001.

Despite my experiential struggle in the actual theatre, the subsequent ruminations have been lasting and invigorating and maybe I should just learn to endure the pain to gain contemporary commentary of the state of our world. Maybe the very form of UNDER ICE and the clear human heart beat and deeply felt conviction of the writer, perceptible to me as audience is a perfect corollary to the argument of the play. It was a stimulating experience, and possibly, one that will last.

Just a note. This is the second work by Kellie Mackereth I have seen this year. Both have been highly satisfying. It is interesting to see the number of women directors been given a ‘guernsey’ at the Griffin in contrast to similar like minded Theatre Companies in Sydney. I will name, Cristabel Sved, Tanya Goldberg, Shannon Murphy, Lee Lewis, Kate Gaul (Forgive me if I have left you out?) as striving and highly accomplished artists in this city. It is puzzling to see the male director often been given opportunity with less satisfying track records. I don’t believe in them and us but some equality of opportunity would be less worrying to observe. With the Companies about to announce their seasons both main house and otherwise, one hopes for a more enlightened spread of talent opportunity. Once upon a time I remember the women artists complaining of the so called "Gay Mafia" conspiracy that prevented opportunity and recognition, now rumour has it, that it is the "hetro-boys club" now, that holds sway. Is this true, in this day and age???

For more information on UNDER ICE click here.
Posted by Pearly Productions at 11:40 PM

I resisted commenting on your closing remarks re: Women Directors in the theatre. As companies release their programs for 2010 comment is raging elsewhere in the blogsphere. Kevin, there is a HUGE issue with gender representation in the theatre in the key creative roles of writer and director -- where have you been hiding???

We saw UNDER ICE and hated the script. I thought the acting, direction were all fine, but if I could have walked out, I would have.

this review captures what I thought:
http://blog.edgeplay.org/2009/09/under-ice.html