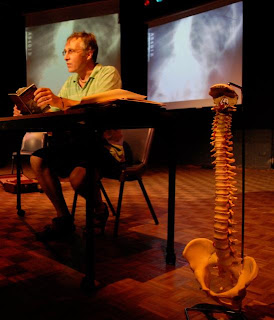 THE BOUGAINVILLE PHOTOPLAY PROJECT: A Version 1.0 Production in Association with Tamarama Rock Surfers and Paul Dwyer.

This remarkable example of Verbatim Theatre has been devised by Paul Dwyer .

Last year, Performance Space held a week long program called LIVEWORKS which I attended. I saw quite a deal of the stuff. However, for some reason my timing and juggling of my commitment to the showings did not line up for me to see THE BOUGAINVILLE PHOTOPLAY PROJECT. Who ever I met, in the breaks between the smorgasbord of offerings, time and again, asked, “Have you seen BOUGAINVILLE etc……” Glumly and finally exasperatedly I had to reply “No.” “NO, NO, NO……” Last night I saw it at the Old Fitzroy Theatre. A most unlikely venue for this work. Congratulations to Tamarama Rock Surfers for having the vision to include it in their programming. It is well worth catching.

Dr Paul Dwyer who devised and performs this solo piece “holds a Diplome d’Etudes Approfondies in theatre from the University of Paris - 8 and a PhD in Performance Studies from Sydney University where he is Chair of Department.” Dr Dwyer has acted, as well, as dramaturge on quite a number of Version 1.0’s output.

This work is a very different form of theatre for a lot of regular theatre goers. The set consists of several screens, on which documentary film, slide projections are projected. The wall to the audience’s left, as we sit, is covered in photocopied newspaper articles and other documentation, some written upon and circled etc. (You can peruse after the show.) Later, technical props and paraphernalia will appear at the actor’s behest and be used to tell the story that we are witnessing, that are age and era specific, that add resonant touches of reassuring authenticity. For instance at one stage in the play, Dr Dwyer produces a set of slide reproductions on a rubber like cloth, hung on a flown-in sling, that he then shows swiftly, turning the pages back on each other as we recollect the images already shown to us earlier in a contemporary slide/digital format. It took me back to my school days and connected me directly to the time era which we were been connected too - the 1960’s. Along the wall to the right sits the technical support team: Video Artist Sean Bacon and Director David Williams.

This work is developed by Dr Dwyer from the connection of his father, who was an orthopaedic surgeon in Sydney, (a Macquarie Street specialist) who gave time to travel to Bougainville and work voluntarily with the people on this island and operated on patients that otherwise would be crippled for life. Working in primitive circumstances with unsophisticated tools. Friendships were struck. Skills taught and miracles wrought. He made many visits and took some of his young family with him and documented “their holiday.” We are shown the snaps and are read a diary that one of the boys kept. Later we learn, from documentary film footage, of the decimation by mining company interests of the land of these people. We learn of a civil war that broke out with these people. Some fighting for the mining company, others standing up for their property/land rights. We learn of the battle between the "raskols" and the people. We hear of some terrible events/tragedies. We learn of the Australian Governments culpability in the war effort: “helicopter gunships”. We learn of denials and then we are presented with photographed evidence. We are told of the Australian newspaper revelations and the shaming of our government. And this is all in the explanation context of present research work being conducted by Dr Dwyer on Reconciliation. Using the old contacts of his father’s charitable miracles as a cover, Dr Dwyer investigates this phenomenon, that is so alien to our Westerner’s sense of justice and revenge.

In the program notes Dr Dwyer talks of a man from Bougainville, John, who is wounded viciously by the “raskols” and taken away to be murdered only to be unexplainably left to die. “Not only did (John) survive: he has been through a reconciliation ceremony with the raskol who tried to kill him. When John is in Arawa he visits this young man and has stayed in his house; and when the man comes to Burka, John returns the favour. I find this story almost impossible to comprehend…” This Reconciliation is what is the crux of Dr Dwyer’s present work. Dr Dwyer was last there in 2007 and plans to return, hopefully with his sons, next year. The saga with this family and the people of Bougainville continues. The wonder of the human capacity for Reconciliation hums in the resonant post experience of this performance.

What is remarkable in all this is the total theatrical experience that is woven by David Williams, Paul Dwyer and Sean Bacon. It begins, and one feels, oddly, that one has stumbled into a WEA education lecture hall. One, I, less than generously partakes, after all it is hard to leave, especially so early in the performance. However, Mr Dwyer is so modestly charming that one gradually is beguiled into sharing time and meeting his father. One begins to admire the father who seemingly, selflessly, travels with his sons to this strange environment and creates miracles cures. There is a feeling of Catholic missionary zeal, (much like I had when, as a child, I watched Jennifer Jones in THE SONG OF BERNADETTE -- I was inspired to contemplate self sacrifice!!!) Then one is moved to political attentiveness with the introduction of the Mining Company activities- one, simultaneously, contemplates our present government’s Western Australian activities and I ask what am I doing about it? Then one is disturbed by the ugliness of the civil war accounts. One is then confronted by the Australian government’s barbarity and duplicity- one is affronted, and much like the recent BALIBO film experience, shocked with a sense of betrayal and guilt. Gently, Mr Dwyer brings us back to the personal family aspirations and memories and the context in the contrasts to the big and little pictures of our lives are subtly laid out for us to contemplate. I smiled, I laughed, I was educated, I was provoked, I was moved. I was, ultimately, inspired. This was a modest but very good night at the theatre.

I hope, that an audience finds this work. It is well worth seeing. It is, alongside THIS KIND OF RUCKUS at the Performance Space earlier this year, what makes VERSION 1.0 a very important and interesting company in the Sydney Theatre going experience. Do go. (Goodness, that is two shows in a row that I have recommended!!!!)

Playing now until 31 October.
For more information or to book click here.
Posted by Pearly Productions at 1:51 PM

I agree with your comments about this totally engaging performance.
I am so glad it is on at The old Fitz too as it not only offers a chance for audiences to experience something special but necessary transgression of aesthetic pre-occupation.