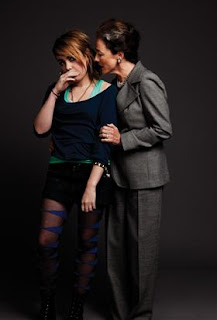 As usual with the recent Belvoir productions of late, the production values of the work, is exemplary. The Set design by Brian Thompson, a single setting for various locations, of semi-gloss, grey concrete walls and floor is very elegant and contemporary in its feel. (There was an echo of the SCORCHED and BAGHDAD WEDDING Set Design, what this one lacked, was sand!!!) The props, table, bench etc very beautifully executed and used. Costume design by Jennifer Irwin is especially pleasing and accurate - character is delineated quickly and supportively. Lighting by Damien Cooper was sublimely attractive both in details and washes. The look was stimulating. The Composer, Alan John has created a contemporary score that is witty and suggestive of style. The Sound Designer, Steve Francis, has made subtle choices in supporting the action of the play.

This text by David Hare is not at the top of his game, but still a David hare play, even one, that I regard as lesser than usual, is still something to look forward too. The play deals, satirically, with observations of the British Political Machinery and their interaction with Industry and Journalism. We get the big picture observations embedded with the human stories of some of the characters to keep us both intellectually massaged and emotionally concerned. The concerns of the play are easily translated to our own here in Australia, Federal Government, and especially with daily reports in our newspapers, about the NSW government and the origin and scale of both Parties coffers of support.

David Hare in his notes in the program says: “I set out to ask a simple question: how did we reach the point where we believe virtue is exclusively private?....... Anyone who takes part in public life is assumed to have corrupt motives. Politicians are openly disbelieved. Journalists are wholly mistrusted. Bankers currently have reputations somewhere way below pimps and prostitutes. Social workers are reviled and pilloried, teachers are held to be incompetent and doctors are thought long ago to have abandoned the high ideals of medicine. No one in the West who announces that they are working for the common good, or for anyone but themselves, is assumed to be in good faith...... For a long time in Britain our public life has seemed cynical and degraded, a dance of death between politics and journalism. Yet against this background individuals go on trying to live good lives.” This is all extremely relevant to us today.

All the actors have created characters that have physical dimensions, exhibited by particular physical secondary activities to define them e.g.: wildly flamboyant large white handkerchief gestures for the outrageous fundraiser, and later coat buttoning and unbuttoning, Otto Fallon (Hugh Keyes-Byrne); stiff lower torso, forward tilted upper torso, one hand on hip with the other hand continually concerned with the adjustment of the coiffure (as a psychological gesture) of The Home Secretary, Meredith Guest, add pursed lips (Sarah Peirse); the erect immaculately dressed body, held, uncompromisingly, in a neutral pose, with the brisk arm action of an automaton, when walking, of the minder, Monique Toussaint (Paula Arundell). All the actors have seemed to have worked in detail in capturing almost iconic physical identifications for the people in the play. It reminded me of the similar efforts that the actors created in Neil Armfield’s production of STUFF HAPPENS, where they were all attempting to play real life, famously identifiable people: Blair, Condalese Rice etc. All of them have worked with the voice and accent coach, Danielle Roffe, to approximate, for the Australian ear, the sounds of that milieu. Good vowel sounds, as well as musical patterns.

However, what struck me as I watched the play the other afternoon, is that the actors generally failed to engage with the muscular wit of the spoken words inherent in the usual Hare style. Most of the actors seemed to have acquired, “this is simply information and content” and tended to play in a naturalistically caricatured manner. The satire, the witty brio of Hare was not engaged in. The speech work lacked knowing satiric energy - intellectual game playing. The actor employing, knowingly, for the audience, both the objective and subjective combination craft to deliver the play in all of its potential to the audience. As in the tradition of G.B.Shaw, (even, the not especially political Wilde), the contemporary writers Stoppard and Hare engage in the deliberate use of the English language as “sword-play”. A game, often, between characters and, certainly, a game for the benefit of the alert audience. (With the right clues we can be made to feel smart.) Language usage that clues the audience to both the Brechtian political statements, the satire and the personal, emotional developments of the characters is what is needed. That element of wit of the textual capacity of GETHESEMANE was not present. So, the afternoon was interesting but not especially thrilling. The play lay kind of flat. Paula Arundell in her long second act scene was the most successful in sussing out the necessary entry point for the text. Her scene with Dan Wylie had the right edge, the right sense of guiding the audience to be both in the play and outside the play at the same time. It had a witty sparkle that was refreshing and engaging. Amusing as well as everything else.

This is not the best of Neil Armfield that we have come to expect and respect. Actors seemed to roam the stage without real motivation. The pacing of exchanges and the inner energies of the actors were sometimes far too flat. Actors that only had one scene, felt as if that is all they knew of the whole. The play was made up of bits that were being unintentionally disintegrated from the whole. The performance on Saturday was not played as a whole. It was an ill fitting jigsaw, parts, not a cohesive whole.

Thus, an attractive looking package of a minor play, dealing with important and relevant contemporary issues. May be it was indicative of the company energy that not all the actors returned to the stage for the curtain call. Audience around me while applauding those that were there, to complete the experience, were asking “Where is the Prime Minister?” (Rhys Muldoon).

Playing now until 18 October.
For more information or to book click here.
Posted by Pearly Productions at 3:43 PM